The political temperature in Himachal Pradesh is keeping up with the warming climate as both witness an upward spiral. With a rookie Aam Aadmi Party throwing its hat into the ring after a landslide victory in next door Punjab, the hill state will see a triangular contest for the first time since its inception.

As the state moves toward an assembly poll together with Gujarat, in recent days both AAP and the Bharatiya Janata Party are raising their political pitch in public, and the Congress too has made some much awaited changes in its state organization.

BJP national president Jagat Prakash Nadda has thrown the party’s weight behind Chief Minister Jai Ram Thakur, while the Congress has chosen Mandi MP Pratibha Singh, widow of former chief minister Virbhadra Singh as its state unit chief. AAP however is still on the lookout for a credible face to lead it in the state.

With Pratibha Singh’s elevation as state unit chief replacing Kuldeep Singh Rathore on Tuesday, for once the Congress was restructured as expected by the party high command. It is a balanced setup for the party in the state, placating the concerns of every faction. Former state chief Sukhvinder Singh Sukhu who heads one of the two main factions has been appointed chairman of the campaign committee, besides being a member of the screening committee. Mukesh Agnihotri continues as the Congress legislative party leader. The party also announced four working presidents.

Himachal voters have a history of alternating between Congress and BJP, and the boost for the opposition party which won all the assembly and parliament seats in the recent bye-polls in November has made the mood in the Congress camp upbeat. Pratibha Singh was the obvious choice for state chief after her victory in the Mandi Lok Sabha bypoll, riding on a sympathy wave after the death of her partner, and on the mood of anti-incumbency confronting the BJP under Jai Ram Thakur.

Mandi being Thakur’s home turf, and the victory coming less than a year ahead of the assembly polls, made Pratibha Singh’s win all the more important, and she has now emerged as a new pole within the Congress standing tall over the other factional leaders. Virbhadra’s son Vikramaditya Singh is also a sitting MLA.

The Congress is all set to campaign on the issues of spiralling inflation and unemployment, besides other local issues dotting the economic landscape of the hill state.

“We will go to the public taking up the real issues under collective leadership. The party will begin its campaign by organizing public rallies in the four parliamentary constituencies of Kangra, Hamirpur, Mandi and Shimla that will be addressed by the top leadership. The campaign will then expand to individual assembly constituencies,” said Vijay Pal Singh Chauhan, a young leader from Siraj who also heads the ‘intellectual cell’ of the state Congress party.

For CM Thakur it is an uphill journey ahead, although the BJP is drawing courage from having repeated its governments in both Uttarakhand and Uttar Pradesh in the recent polls, a first for both states. Jai Ram has also secured the backing of the BJP high command amidst speculations that he would be replaced as were the party incumbents in Uttarakhand and Gujarat.

In fact, Thakur is reportedly raising the Sangh’s pet demand of a ‘uniform civil code’ like his counterpart in Uttarakhand Pushkar Singh Dhami, which has come as a surprise to many.

The party organized a rally in Nagrota Bagwan, Kangra on April 22 in a move to preempt a similar event addressed by AAP’s national convener and Delhi Chief Minister Arvind Kejriwal in Shahpur in the same district the following day.

Addressing the rally, Nadda played up the Modi government’s initiatives for the country and the state. Calling the state government under Thakur a ‘proactive’ one, Nadda said it was committed to meeting the people’s expectations and aspirations.

He attacked prior Congress governments for ignoring the interests of the people, and pointed out that it was Modi who restored the special category status of Himachal Pradesh, as well as the 90:10 ratio of union-state funding for infrastructure projects. He recalled that Atal Behari Vajpayee had provided a special industrial package for Himachal Pradesh.

In his address Jai Ram Thakur said that Modi considers Himachal his second home and has always been considerate toward its developmental needs. He added that his own tenure has been full of accomplishments and achievements.

Next day, AAP came up with an impressive show in Shahpur where the crowds were at least as big as at the BJP rally. It was Kejriwal’s show, where he was seen trying hard to sell the ‘Delhi model’ with emphasis on employment, medical care and education. He even accused Thakur of copying him by announcing 125 free units of electricity some days earlier. “AAP has emerged as the third alternative in Himachal. We have to change Himachal Pradesh. I don’t know politics. I am an outright honest person,” said Kejriwal.

The Aam Aadmi Party certainly sees Himachal Pradesh as a fertile stepping stone for its nationalised trajectory. It is hoping for a spillover of support from the Punjab polls, at least in the areas bordering the state. Sources said that AAP MLAs in Punjab have been told to focus on Himachal and make regular visits to various constituencies in the state.

But observers feel that climbing the hill terrain will be a difficult task for the rookie party, as the scenario here is very different from that in Punjab, where an outburst of public anger against the traditional parties resulted in AAP winning 92 seats of 117. Unlike Punjab the politicians of all parties are quite easily accessible in Himachal. The state has also done quite well on social parameters, although things are still not up to the expectations of the public which is among the most literate in the country.

And the biggest challenge for AAP remains getting credible leaders to its fold. The reported refusal of former Congress minister Vijay Singh Mankotia to join the party ahead of Kejriwal’s show was a dampener for AAP, which earlier had to dissolve its entire state unit following a string of defections to the BJP. 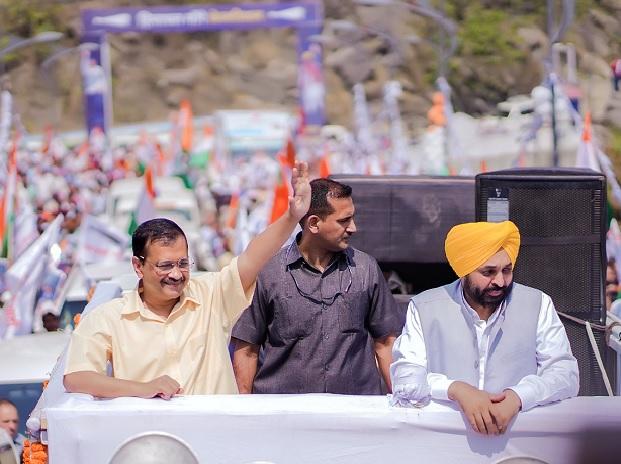