Arson and demolition of houses

In February, the Assam government submitted an affidavit stating that 28 people had been killed and 73 injured in police action between May 2021 and January 2022.

The death of Safiqul Islam on Friday, May 20, has triggered a series of events in Nagaon district of Assam, including arson, administrative demolition of houses, and arrest of six persons including a minor.

Islam had been arrested the night of May 20, the police said, for being inebriated.

According to Islam’s family, he had been physically abused while in police custody, and the police had asked for INR 10,000 and a duck in bribe to release him. However, when the family members arrived at the police station with just the duck, they said they found that Islam had been beaten in custody.

The family of the deceased has since been insisting that the death was due to police violence while in custody.

However, Assam DGP Bhaskar Jyoti Mahanta later claimed that Islam had been released by the time he began feeling ill. He also tweeted, “We take the unfortunate death of Safiqul Islam very seriously, and have put the OC of Batadraba thana on suspension, and rest of the staff closed. If there is any foul play at our end, we mean to find that and punish the guilty according to the law. No two thoughts.”

As a retaliation to the death of Safiqul Islam, the Batadraba police station was set on fire by six individuals, five of whom have been identified as family members of the deceased.

As a response to the fire on Saturday, the authorities on Sunday ordered and carried out the demolition of the houses of those suspected of igniting the fire. This included Safiqul Islam’s home, since his wife and minor daughter were also identified in the video footage of the arson incident. All five homes, located in Salonibari in Nagaon, were destroyed.

DGP Mahanta told Indian Express in a statement, “While we will not let go any police personnel found guilty, we will act even tougher against elements who think that they can escape the Indian justice system, by burning down police stations.”

Leena Doley, Nagaon SP, has released a statement to the Press, saying that the daughter is being treated as a child in conflict with the law, under the Juvenile Justice Act.

Three cases have been filed by the police in relation to Safiqul Islam’s death - Islam’s unnatural death - which the police are claiming happened because he was unwell, arson of the police station, and another under Unlawful Activities (Prevention) Act, since the arson is being seen an act of terror.

Another custody death closely followed Safiqul Islam’s. This time, it was Asiqul Islam, one of the prime accused in the arson of the police station. He was reportedly killed while fleeing custody.

Additionally, Doley has also publicly stated that the accused in the arson have previously been accused of other crimes and are suspected to have links to the terror group Ansarullah Bangla Team (ABT), a terrorist group in Bangladesh. “While there was an element of reactive response following the death, there is more to it, considering the intensity and force of the attack,” she stated to the press.

In this case, Doley told the Press that during questioning, Asiqul Islam had confessed to storing arms at his residence. After the search operation and pistols and ammunition were recovered from his home , the accused reportedly tried to escape on the way back to the police station, and was accidentally run over by the escort vehicle.

The National Investigation Agency is also looking into the case. 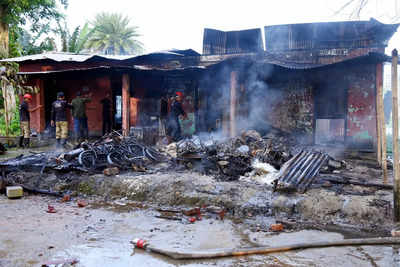