The decorum displayed during the Budget session of the Uttar Pradesh (UP) Legislative Assembly was delightfully decent. The session concluded last Tuesday, and after a long time the performance of the state’s lawmakers was pleasantly proper. The banter between the Chief Minister Adityanath and leader of the Opposition in the Assembly, Akhilesh Yadav, was exemplary. It was almost witty.

Talking of the pathetic state of UP’s education system, Samajwadi Party (SP) chief Akhilesh Yadav and leader of opposition said that school kids are so ill informed these days that one of them mistook him for Rahul Gandhi! This was rib-tickling for CM Adityanath who replied that the child was not wrong as there was little difference between Akhilesh and Rahul. The repartee had made legislatures roar with laughter.

“I want my perfume park in Kannauj,” Yadav had insisted to the government. He had complained that the budget presented by the government for 2022-2023 had no plan to help those engaged in the world famous perfume industry of Kannauj. Yadav said that plans for a cow dung plant in Kannauj should be replaced with a perfume park. He suggested that the cow dung plant be shifted to the Chief Minister’s home in Gorakhpur as Kannauj deserves investment in a more aromatic plan for a perfume park. To the further amusement of all those present in the House, the CM pointed out that Yadav calls himself a farmer but he cannot stand the aroma of cow dung!

It is the job of legislatures to participate in informed, intelligent and witty debates in the House. However, in recent times, elected representatives have used the floor of the Assembly to mostly shower hate and vengeance upon each other, forgetting why they have been sent there by voters. Voters elect politicians to pass laws that allow everyone to live as equal and contented citizens in a shared space. Citizen friendly laws are supported both by the government and the Opposition parties to ensure unity, peace and harmony in society. It is a pity that most politicians seem to support laws that benefit only those in power today, rather than all citizens.

Drama of a Diary

Uttar Pradesh’s deputy chief minister Brajesh Pathak has been allotted a house in the VIP area of the Vikramaditya Marg in Lucknow. In the same session of the Assembly, Pathak said that he had found a diary in the house allotted to him. The house was once occupied by veteran SP leader Azam Khan when he was UP’s minister of urban development. After Khan, the house was allotted to Deputy CM Dinesh Singh when the Bharatiya Janata Party won the state assembly elections in 2017. But Singh never lived in the house.

Pathak said that in “coded language” it is mentioned in the diary how the SP had distributed money amongst its members when the party was in power. Pathak said that only the SP can decode what is written in the diary. Listening to the Deputy CM say what he did, a citizen wondered why the important information has not been handed over to a professional investigative agency to unravel the drama of the diary?

Pathak also attacked the socialist credentials of Yadav. He said that socialism is an economic philosophy. Socialists make sure that the ownership of a nation’s wealth and property remains in the hands of citizens. However the wealth of the state of UP was controlled by one family when Yadav was in power.

There were more barbs and counter barbs during the 18th Assembly session. Yadav had called the budget a spider’s web of statistics. The Bahujan Samaj Party (BSP) chief Mayawati added that the budget for the financial year 2022-2023 was not in the interest of the public.

But what a relief that after a stormy start, the session ended on a civilised note on May 31. The SP members had walked to the well of the House on the inaugural day to shout slogans as the Governor Anandiben Patel continued to talk of addressing the problems of the poor and marginalised section of society in her speech.

It always feels good to see the Rashtriya Lok Dal (RLD) chief Jayant Singh and Akhilesh Yadav hand in glove. Together, the two educated and youthful politicians make a pretty picture. They symbolise unity in UP. They represent diversity and in an atmosphere of spreading hate, the two progressive politicians stand for hope and for better times to come.

Singh filed his nomination for the Rajya Sabha elections as a joint candidate of the RLD and SP. Yadav was beside him as Singh did so. For the RLD chief it was a special day and one that he will never forget in his life, he said. Visibly emotional, Singh promised to work together with Yadav to change the fate of UP.

After having done that, Priyanka Gandhi returned to Lucknow to attend a two day Nav Sankalp Shivir. The names of the many shivir or conclaves hosted by the Congress get more sophisticated but not its performance in present day politics. The grand old party’s shrinking reputation is a matter of concern.

The idea of the recent conclave in Lucknow was to brainstorm strategies and to seek new alternatives to wake up the party in UP. This is the first event hosted by the Congress after the UP elections last April. Priyanka Gandhi had campaigned for the Congress in the last state polls but the party won only two seats out of the 403 seats contested. 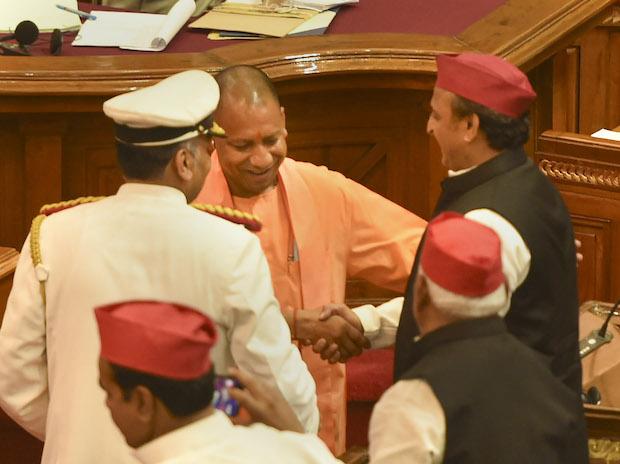