Dalia Taha’s new play Fireworks came to the end of its month-long run at London’s Royal Court Theatre in mid-March.

One of the products of the theater’s seventeen years of work in Palestine, the play follows two families living in an apartment building in an unnamed Palestinian town under siege. The two central characters are eleven-year-old Lubna and twelve-year-old Khalil. As the only children in their building over the course of an extended bombing campaign, they find themselves pushed together.

We also follow the lives and worries of their parents struggling to cope with what is happening. Saleh Bakri and Sirine Saba are especially compelling as Lubna’s parents, Khalid and Nahla, whose marriage is steadily coming apart after the death of their son, Ali, in an airstrike (though not entirely because of it).

The title of the play is Fireworks in English but Al?ab Nariya in Arabic. The theater has been very careful to keep both languages on tickets, programs, scripts and its website.

The “fireworks” of the title are a reference to the bombs falling on the city, which Khalid tells his daughter Lubna are fireworks like the ones they watch during the holy month of Ramadan to try to comfort her. The specter and the sounds of bombs are a constant feature in the play.

Taha has consciously decided not to set the play in Gaza. But it is hard not to imagine the events taking place during one of Israel’s bombardments of Gaza.

How could the audience not connect the scene of Khalil and his father Ahmed looking out from their rooftop and counting the buildings that have disappeared to the events in Gaza? How could anyone who has seen the horrific images of children killed on a Gaza seashore not bring them to mind when the children’s parents frequently promise that by Eid the bombing will be over and they can play on the beach?

This is about much more than the “fireworks” alone. The Arabic root of al?ab — la?iba — means “to play.” 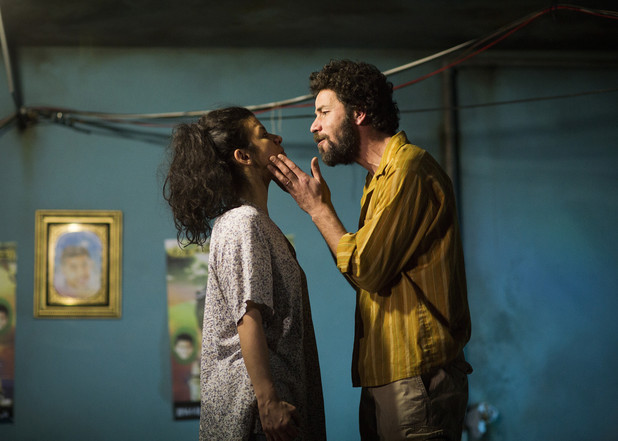 More than anything, Taha’s new work is about children coming of age under siege. The child’s games that the two main characters play and their development is affected by the lives they live.

Khalil’s games, particularly, become increasingly centered around violence and military checkpoints. In one scene, his mother tries to move their theatrics to another planet and to pretend they are the Teenage Mutant Ninja Turtles. But Khalil resists, firing at his mother with an imaginary pistol and accusing her of being a spy.

Lubna’s transitions towards adulthood in a world of war are dramatized clearly on stage. As Khalil is shooting at her in one of their games the blood of her first period appears on her trousers.

The final thing that the title evokes is the fact that this is a (theater) play. Al?ab is not a word that is often used now for plays but, historically, it has been. One question lying behind the production is how to act the situation in Palestine on a British stage; how to represent Gaza in Sloane Square — where the Royal Court Theatre is located.

The staging attempts to replicate the claustrophobia of being trapped inside a single apartment building for days. Even though the action moves between the apartments of the two families, the other actors often sit on the side of the stage when they are not in the scene, maintaining their presence in the room.

However, it is not with any fireworks that the play most effectively stages the families’ troubles. The sounds of planes and bombs do ring out in the background and Lubna and Khalil’s games throw the actors around and across the stage.

Yet, the play reaches its peak (both narratively and aesthetically) when the stage lights go off, except for a box of light going round its edge, and Lubna steps out, alone, towards the audience. She delivers a speech about loss and mourning that alone makes the play worth seeing.

In a play dominated by action and quick dialogue, in which there are only two speeches that even come close to half the length of this final monologue, this long speech stands out. It shows how, as Greek tragedians knew well, a long descriptive speech that engages the audience’s imagination can be more effective than any “action” — or “fireworks.”

(Raphael Cormack is a PhD student in Arabic literature and theater at the University of Edinburgh, Scotland.)