ELECTRONIC INTIFADA: Students at the University of Sussex in the UK have voted overwhelmingly in support of their student union being part of the boycott, divestment and sanctions (BDS) movement.

In a cross-campus referendum that closed on Friday, 806 students voted in favor of BDS (68 percent of votes cast), compared to just 373 votes against.

The referendum ensures that Israeli products will remain off the shelves at student union shops. This policy had been in place since 2009 but was due to expire.

The vote means the student union should now step up its campaigning against the contract between the University of Sussex and Veolia, a French multinational targeted by the BDS movement over its role in illegal Israeli settlements.

I spoke with Kareem B, a Palestinian student involved in the highly visible campus campaign that involved several weeks of events and actions on campus.

“Students at Sussex were horrified at Israel’s massacre of Palestinians in Gaza last summer,” he said. ”We’ve been able to show that joining the BDS movement is one of the most effective ways we can take effective action in solidarity with Palestinian students and young people.”

“This vote demonstrates that BDS now has popular appeal on our campus. We’re looking forward about developing the BDS campaign here at Sussex next year with the student union’s support,” he added.

Student unions and groups in Gaza had called on Sussex students to vote for BDS in a written statement.

The few pro-Israel students on campus failed to agree on the best way to defend Israel’s crimes, meaning that the anti-BDS campaign on campus was even weaker than had been anticipated. Only one pro-Israel student showed up to oppose BDS at a debate organized by the student union.

The comfortable referendum win at Sussex is just the latest in a series of impressive steps forward for the BDS movement on campuses across Britain.

During Israel’s war on Gaza, the executive committee of the National Union of Students (NUS), of which nearly all individual campus student unions are members, voted to support and join the BDS movement.

More than one hundred student activists from across the UK met in Sheffield in October to plan for an academic year of BDS successes.

In January, students at University College London voted for the student union to terminate its cash-collection contract with G4S, a British company that helps Israel run prisons in which Palestinian political prisoners are held without trial and are subjected to torture.

The student union at Essex University recently terminated its contract with G4S as a result of a student campaign, following similar votes to terminate contracts with G4S in recent years at student unions at Kent, Dundee and Edinburgh. 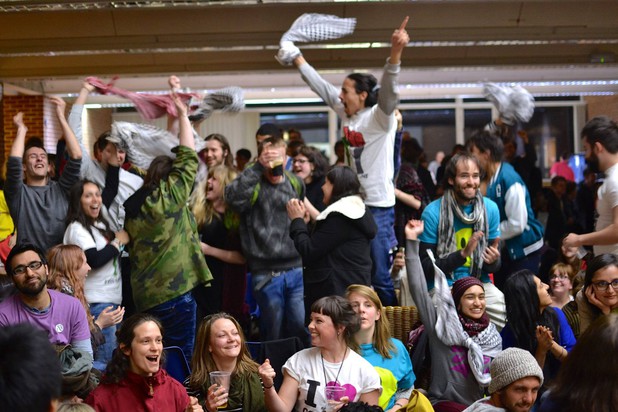 In February, students and staff at the School of Oriental and African Studies in Londonvoted to support an academic boycott of Israeli universities, with 78 percent of voters supporting BDS. The vote was precedent setting in that university staff and academics took part in the vote as well as students.

This academic year has seen a further eight student unions from across Britain join the BDS movement.

Resolutions in support of BDS have been approved by student union votes at Essex, Goldsmiths, Birkbeck, Kingston, Swansea, Exeter, Brunel and, just last week, the University of Strathclyde.

The NUS Women’s Conference and the NUS Postgraduate Campaign conference both recently passed resolutions in support of BDS tactics. The motion passed by members of the Postgraduate Campaign included a specific clause on academic boycott, a further sign that even academic boycott, previously considered controversial, is now widely accepted within the student movement in Britain.

Recent years have seen universities including Kings College London, Southamptonand Sheffield drop contracts with companies like G4S and Veolia as a result of student campaigns.

Both G4S and Veolia are now discussing withdrawing from some aspects of their complicity with Israeli apartheid. Student actions against these companies have made a powerful contribution to these successful international BDS campaigns.

Malia Bouattia, the president of the National Union of Students Black Students Campaign, which also endorses BDS, and a member of the NUS executive committee, told me that solidarity with Palestine is now mainstream among UK students.

“There’s now a clear consensus among UK students in support of the Palestinian struggle against Israeli colonialism and apartheid. More than 25 UK student unions have voted to approve BDS resolutions in recent years, and no resolutions against BDS have been passed anywhere in the UK, something delegates to the NUS conference in April would do well to remember when NUS policy on BDS is discussed there,” Bouattia explained.

“BDS represents a clear strategy for UK students to help end international support for Israeli apartheid. Now we need to build even bigger campaigns that can pressure more UK universities to cut ties to companies and institutions that participate in Israel’s crimes against Palestinians,” she added.

If this tireless and creative organizing across campuses in Britain this academic year is anything to go by, then the BDS movement among UK student is set to secure even more impressive successes in the months to come.