Gardens Used as a Tool of Colonisation

'Wounded' by Corinne Silva at The Mosaic Rooms. (Andy Stagg)

Gardening is supposed to be benign, organic, a balm to the modern urban soul. What could be more innocent, more life-enhancing, than nature?

As Garden State — Corinne Silva’s photographic exhibition at London’s Mosaic Rooms— shows, gardens can also be a tool of colonization. The show is a multi-faceted discussion of the power relations written across the landscapes of historic Palestine.

The first half of the exhibition, “Gardening the Suburbs,” comprises dozens of small images taken by Silva in Israeli settlements across the occupied West Bank and new towns within the State of Israel. They show how landscaping and gardening have been used to assert ownership of the land, erasing indigenous plants and animals and replacing them with an uneasily sterile and generic “Mediterranean” style.

As the exhibition brochure points out, many of these gardens could be located in California or southern Spain. Anything distinctive about the scene has been eradicated.

It is clear that we are seeing the impacts of the latest in a long line of impositions of colonial desires onto colonized landscapes. In Australia, for instance, homesick settlers brought European animals and plants to “tame” the native terrain, and wreaked environmental havoc in the process.

The enormous ecological damage being wrought on the Dead Sea is a closer example of the effects of human hubris.

Silva’s photographs simultaneously highlight the artificiality of these attempts and the way that nature itself is quietly defying them.

On one hand, much of the space is starkly “unnatural.” State-of-the-art drip-irrigation systems score geometric shapes across the hillsides, while the earth between the irrigation lines is itself covered with canvas, retaining valuable water but also symbolically confining “weeds,” those plants whose presence is unapproved.

Walls and fences also feature prominently, reinforcing the sense of confinement and division.

On the other hand, trees, shrubs and creeping plants surreptitiously defy the attempts to neutralize them and keep them in their places. Olive trees grow over the tops of gates and small bushes force their way through the holes in fences. The symbolism, with its links to the Palestinian struggle, is unambiguous.

The hanging of the photographs in this part of the show also takes on meaning. The artist’s intention is that the meandering layout on the gallery walls should reflect the way in which settlements have snaked their way around the West Bank and Israel’s coastal plain, imposing themselves onto the landscape. 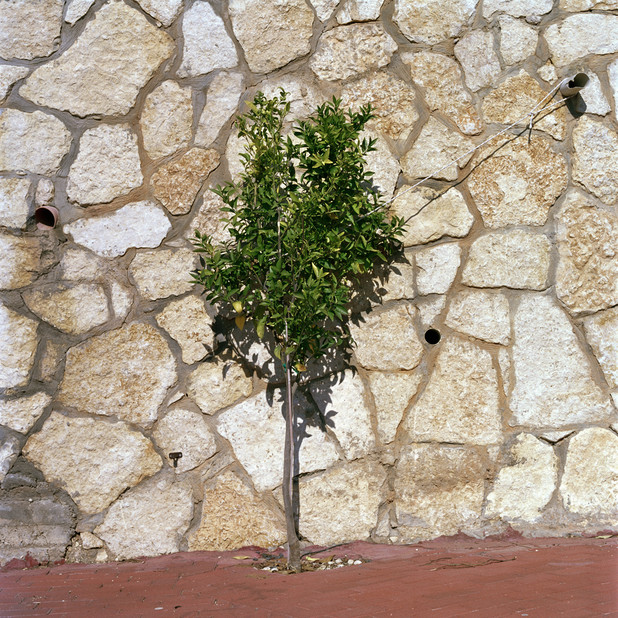 The separate blocks of images also suggest a sense of fragmentation, of the settlements needing to overstate their case. The lack of subtlety only emphasizes the foreignness of the scene.

In the second half of Silva’s exhibition, “Wounded,” giant images taken on Mount Carmel in the aftermath of the forest fires in 2010 hang in erratic sequence along the gallery, reproducing the progression of trees through a forest. A sound recording of the artist wading through lush undergrowth — taken two years after the fires — plays in the background.

The photographs are oddly beautiful in themselves; the burnt tree trunks have a silky texture and the contrasting colors between unburnt wood and charred timber create absorbing patterns.

But the images also have a larger narrative; the Carmel forest — insofar as any landscape in an inhabited region is “natural” — is not indigenous. It was planted as part of the grand Zionist project of claiming the land, stamping a new identity onto the scenery and hiding the remains of Palestinian villages.

The huge fires of 2010, therefore — while framed in much reporting as a great tragedy — could also be seen as returning the landscape to its original form. And the verdant growth which followed the fires — represented in the sound recording as Silva rustles her way through the greenery — suggest the richness and fertility which follows natural conflagrations.

Again, the potential metaphors are pronounced but not overstated within the art. But they do provoke the question: is this what the land needs — a cleansing fire which allows new life to spring up?

The contrasts between the misuse of nature and its potential is further highlighted in an additional part of the exhibition, a small pop-up garden in the courtyard of the Mosaic Rooms. Created by a local organization called Smallworld Urbanism and employing permaculture principles, it emphasizes what socially and environmentally sustainable gardening might look like.

This is a deeply thought-provoking exhibition, making considered points about Israeli colonialism, the place of nature and the “natural” in nationalist rhetoric, and the ways in which what seems at first beautiful and bucolic can come with undertones of power, control and confinement.

But at the same time, the works do not entirely deny the redemptive power of nature. Whether by growing through the cracks or rising from the heat of destruction, Silva’s images also hold out the seeds of possibility.

(Sarah Irving is the author of a biography of Leila Khaled and of the Bradt Guide to Palestine and co-editor of A Bird is not a Stone, a collection of contemporary Palestinian poetry in translation. She is currently a PhD candidate at the University of Edinburgh.)