Dead Man Walking: Smack Addicts In the Heart Of Delhi

A used syringe lying on floor on the left

“They steal my fruits. These people keep changing their location but there is a group of them. They are also petty criminals and thieves. They keep fighting within their group as well.”

We were strolling from one block to another in Connaught place - the heart of Delhi- amid a dust storm followed by rain. Although it was quite a relief from heat, the weather turned gloomy. As we reached G-block- right behind A-block, we came across a group of beggars and rag-pickers lying on the floor-- half conscious as we smelled stinky pungent odour -- right in front of a closed shop.

Startled by their body structure and completely desperate look, we went to an old woman selling fruits sitting in front of them. We kept observing the group, even as we took quick pictures on a mobile phone. Suddenly we saw this 11-12 year old child in the group, bones showing, completed emaciated, inject a syringe into his highly visible veins. He burst into a silent cry filled with pain, his face contorted. 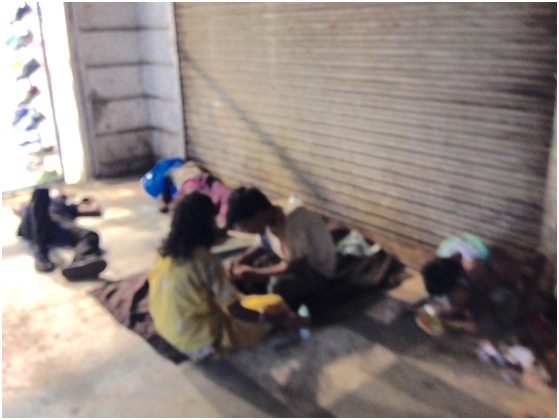 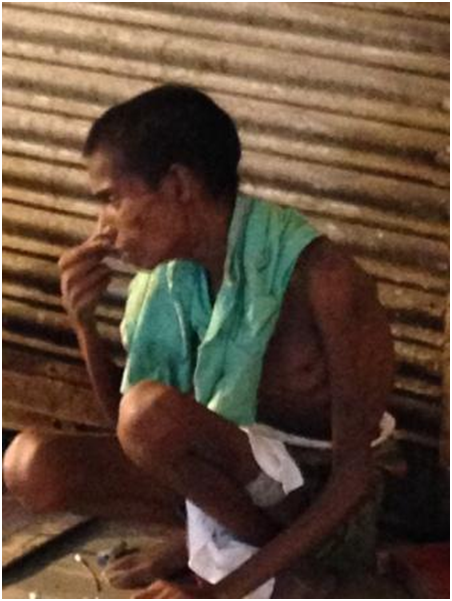 A used syringe lying on floor on the left

Our first reaction now was to move on, but we stayed. This was a group of five individuals- two men, two women and a child. As can be seen from the picture, two of them were lying totally unconscious, a woman and a man were sitting facing each other, as the child sitting beside them transported himself into another world. As Karthik clicked pictures, the man became conscious and started staring at us menacingly.

We went back home in utter shock, and some fear, but decided to return for a better look, and perhaps better pictures..

At around 6 PM on Monday, armed with a camera, we were back in Connaught Place. On the one side were these high end shops, ordinary citizens eating, seeing movies, having a good time in this bustling heart of Delhi. On the other, was this dark world of drugs and desperation. We went to a park adjacent to A-block where we sat for half an hour- figuring out how to get some more shots of these junkies while trying to get them to talk to us.

We came across a person in a red-turban, asking people if they wanted their ears cleaned. He came to us, asking for ten bucks so that he could go back home. Business wasn’t going too well, he told us. We enquired about these junkies on the pretext of helping them out. He said-“Don’t get involved with these people. They are dangerous. They carry surgical blades, used- HIV positive syringes and pieces of broken glass. All day long, they will beg for money. Most part of that money goes into scoring smack, thinner that comes along with whitener fluid and other cheap drugs. When they realize one of their group-mates has a lot of money, they attack him using glass pieces on his face and neck and rob him off. There’s a huge network of these people.” He told us that he used to be a smack-addict three years back, but somehow, he managed to get out of this vicious circle and is now trying to sustain himself through this ear-cleaning business. When we asked him if it was possible to talk to them, he advised us against it.

We decided to figure things out on our own and walked down the road trying to find the group that we had seen on Friday.

We went back to the old spot in G-block, to find that they had abandoned that location. The fruit seller told us that they keep changing their location and had moved out from that place on Friday itself.

We started walking on the outer circle. And then found a whole bunch of totally wasted junkies, some of them begging, some lying unconscious, some actually brawling right in front of us, and some preparing to leave the spot for another location by gathering their straggly belongings. All this is going on in Delhi’s heart, Connaught Place under the eyes of the police. 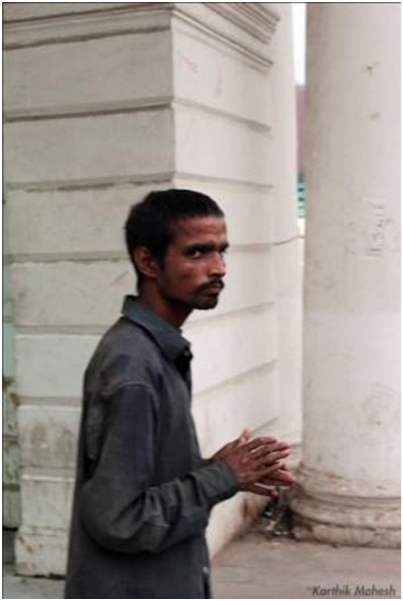 As we saw him from across the street, he seemed to be lost in a different world, his hands shivering while he begged near a subway entrance. We went close to him to get a shot, and as soon as he saw our camera, he became quite conscious and gave us a stare.

We moved on to find the group that we were looking for. 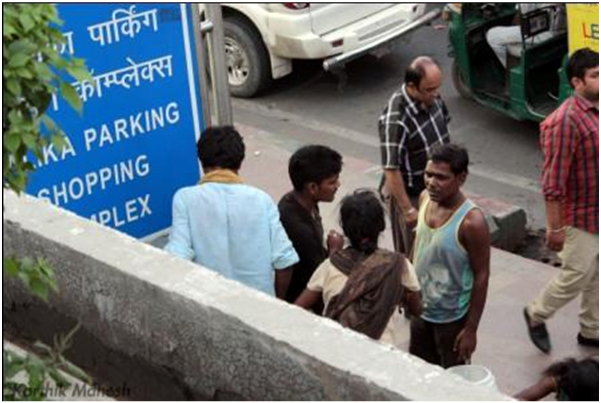 We spotted another group of men and women where one of them tries to get high on diluter. 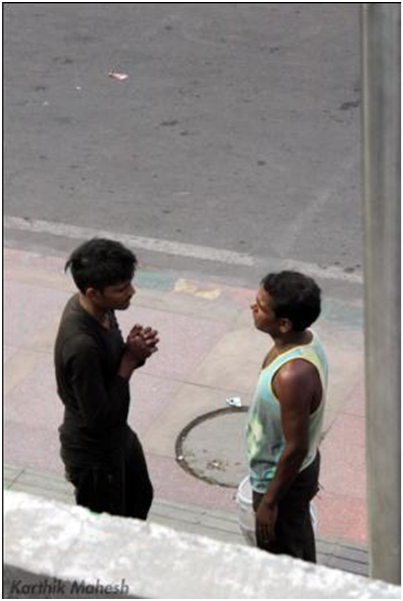 One on the left was holding diluter in his hands.

Within a minute, two of those men get into an altercation over something and one of them tries to threaten the other.

As we were walking on the footpath, we found another group of three persons including the child we had spotted injecting a syringe on Friday. One of these three persons was physically disabled with only one leg. As we observed the group, the physically disabled person moved in the direction of G-block walking past us. He spotted the camera. As we tried to take a shot, he noticed us and started abusing and kept giving us a cold stare. 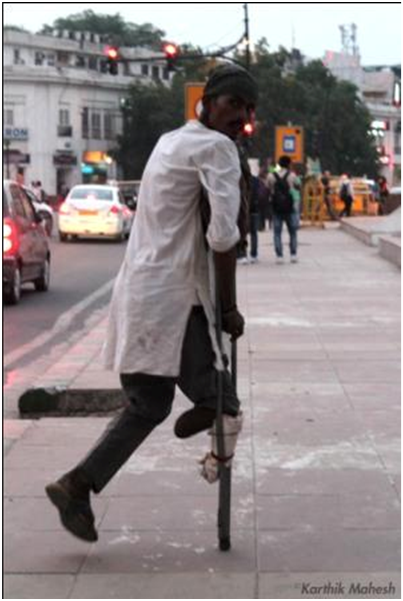 We moved past the other two persons while they were trying to change their place. On clicking a picture, the child whispered in a cracking voice to the man- “Look, they are taking our pictures. We might get into trouble.” 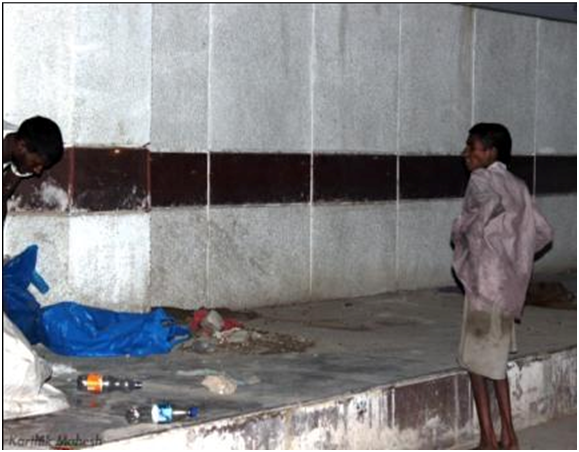 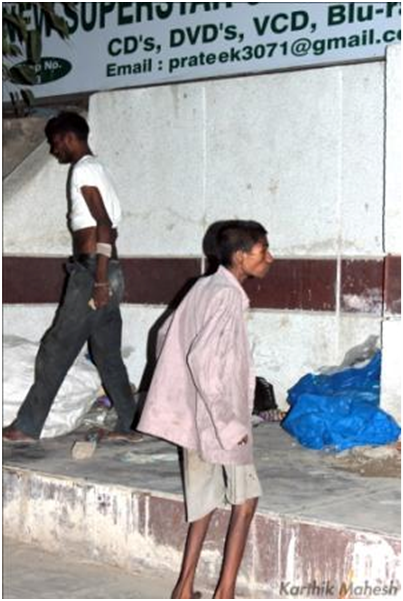 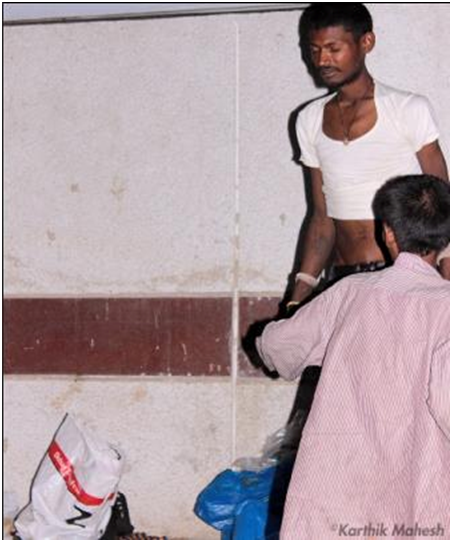 Within seconds, the man chased us while we crossed the road amid huge traffic. Terrified, as we were, we ran as fast as we could, moving past blocks after blocks only to stop when we figured out we were safe.

It was more of a traumatic experience being chased down by one of these persons. So we decided to go back home, as the shocking images of the recent incident lingered in our mind. While on our way, to our surprise, we spotted two more such persons lying on the floor. One of them was trying to inject himself while the other one was totally unconscious. 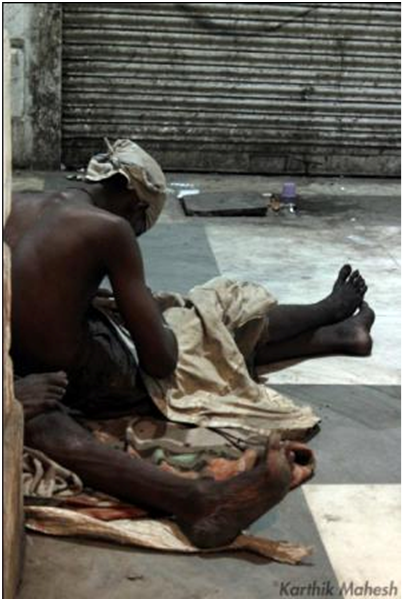 That was the end of it. We decided that we were done for the day while trying to ignore the recent horror that we witnessed. Somehow, we kept spotting more of such junkies each day unlike others who totally ignore their presence and move on, or are often deceived by the garb these drug addicts wear in the form of homeless and helpless beggars. Perhaps those shocking scenes are going to last for a long time in our mind.