Stalin's Daughter: To Be Or Not To Be

Stalin(right) with his daughter Svetlana

A decade ago, Jasmin Gravenhorst chanced upon a German book titled “Stalin's Daughter”, authored by historian Martha Schad. The life story of Svetlana Stalin – or Svetlana Alliluyeva or Lana Peters – had convinced the documentary filmmaker that this was a story to be told, about how the despotism of one man in Russia also ruined the life of his favourite child. After a decade of hunting for finances, Gravenhorst finally made the documentary, documentary already went on air on June 23.

With a robust dose of archival material, and interviews with people whose parents were historical luminaries, the fast-paced documentary takes the viewer to realising the tough life of Svetlana, whose quest in life can be best determined as finding love and home, without the shadow of her father.

“I was fascinated by her story. To be Stalin's daughter was indeed a heavy weight that she had to carry, all through her life. Her life was one of a constant quest, and decisions that weren't always practical,” says Gravenhorst. 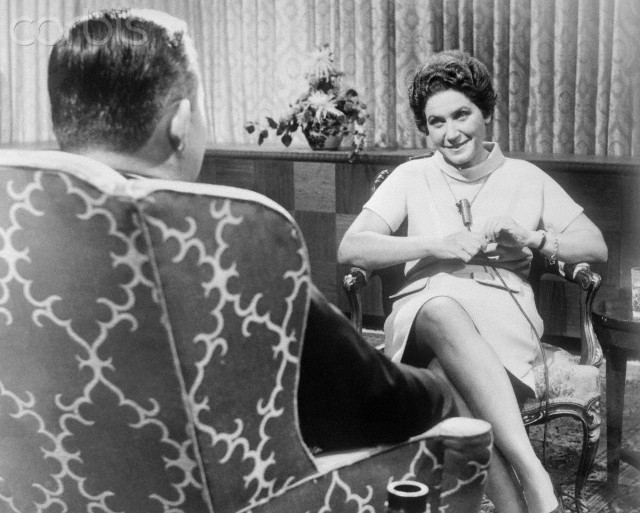 The documentary begins with the US Embassy in New Delhi receiving information that a woman, claiming to be Stalin's daughter, was seeking to fly out to the West. And thus begins the narrative of her fascinating, painful, lonely life, of escaping her legacy and seeking love and refuge. The documentary intersperses rich archival photographic evidence with interviews of people whose parents were luminaries during the period that Stalin reigned, and all of whom had spent some time with Svetlana.

Much of the documentary delves into Svetlana's childhood and disturbed youth, when she realises her father's tyranny. She had been married twice, and had two children from each of the marriages. Stalin disapproved her first husband and never met him; he arranged for her second marriage with the son of one his right-hand men. Even after Stalin had died, she was not a free woman.

In October 1963, Svetlana met Brajesh Singh, a Communist from India in a hospital in Moscow. She did not like Russian men as she found them “fat” and “uninteresting”. Upon seeing Singh, she sung out few lines of a Hindi song that she had known, which translated thus: “Today my heart has opened…”

According to Martha Schad, who published the first biography of Svetlana, Singh acknowledged knowing the poem, and soon their friendship blossomed. He went back to India for a while, but returned to Moscow with the intent to marry her. "But Kruschev did not allow Svetlana to marry a foreigner; besides, it was well known that Singh had been very ill since a long time. They lived together until he died in 1966. 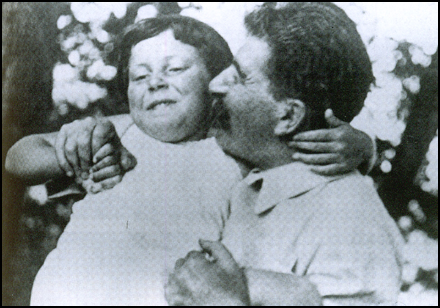 Stalin with his daughter

Svetlana was eventually allowed to visit India to take Singh’s last mortal remains and ashes to his family, and she instantly liked it there. His family could have made the arrangements for her to stay longer, she was not allowed to do so by India’s then Prime Minister Indira Gandhi, with a view towards not disturbing India’s relation with both the West and Russia. This news is believed to have devastated Svetlana.

Even though she was permitted to stay in India for just two weeks, she managed to stay for three months, and then finally headed to the American Embassy in New Delhi one March night in 1967, stating her identity and her desire to flee from Russia. Upon ascertaining her identity, she was first taken to Italy, and then Switzerland, but was denied entry in both countries. She finally was allowed to enter the US as a visitor after she signed a deal to write a book about her father. Her two adult children were left behind in Moscow. Her entry to the US was planned to be very discreet. However, a bevy of journalists were waiting for “Russia's defector” at the JFK airport. "Few years later, Svetlana married once again, this time to William Wesley Peters, who was an apprentice to the renowned architect Frank Lloyd Wright."

The documentary relies heavily on the biography by Martha Schad, who has authored several books on women who held significant positions in historical times. Schad spent two years researching for the book, and saw it published in 2004, without knowing where was Svetlana living.

As an author of biographies of women in history, Schad found that her confidence in raking out Svetlana's exact address in the US was in vain. “I found the email address of Peters' son. He admitted that Svetlana was his step mother, and that she lived in an old people's home Wisconsin, like he did, but he did not know her exact address. He was only able to give me the names of some towns which had such homes,” reminisces Schad. 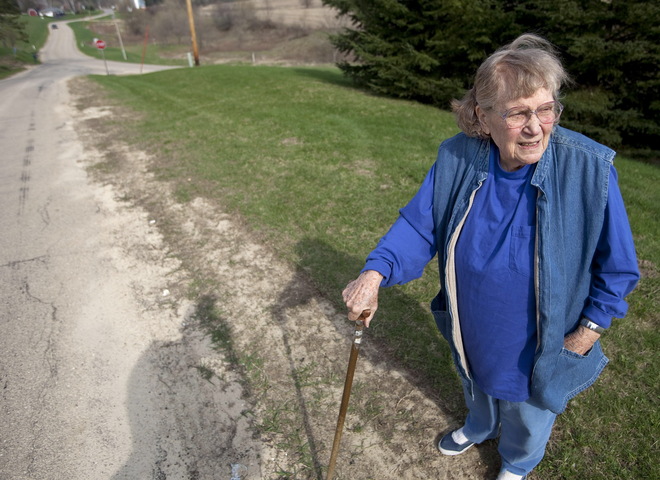 In her later years

Sometime in 2008, Schad found the number of Lana Peters and called her up. When Schad asked her if she was actually Svetlana Alliluyeva, she got very angry as she had thought that her number was unregistered. Svetlana further added that she did not like journalists as they did not leave her alone.

“I knew one thing which would have made her feel better. Her great-grandmother was born in Germany, and I told her that I had been to that town where she was born. When I told Sevetlana this, she began to speak to me in German, as she had learnt German in school and she had a German nanny. She even remembered a German nursery rhyme which made me laugh. I finally asked her if she would allow me to visit her. She laughed and said that she had a good feeling about me, and hence allowed me to come. I went to that tiny town in Wisconsin as soon as I could,” says Schad.

Schad was shocked to see that Svetlana was living in a small room with a small kitchen, and she had few belongings. She was receiving welfare funds from the government. That had been her life for two decades.

When Schad gave Svetlana the biography, Svetlana was happy to see the photographs included: Svetlana had not carried any personal belongings when she had left for India in 1966; and then escaped to the US. So the photographs took her back in time. Svetlana took a liking to Schad, and enjoyed talking to her. “I let Svetlana do most of the talking. She had very few people around her,” says Schad.

Schad had very few questions to ask Svetlana: after all, she already knew everything about her. She took Svetlana to a shop, and during one particular incident, she refused to acknowledge that she was Russian. She said that she was Georgian, as she had taken her mother's surname, who was Georgian.

During those four days with her, Svetlana not once mentioned anything about her father having killed millions. “But she did say, 'The terrible thing about my father was that he did not stop killing people even in his own family',” remembers Schad. They stayed in touch through letters until Svetlana's death in 2011. Svetlana had forbidden Martha from calling her up on the phone as she suspected that the CIA and KGB were watching her, a feeling she carried since the time she left the USSR.

Svetlana herself had severed most of her personal relationships, and for the documentary, only a handful people were willing to speak about her before the camera. “A lot of people told us that she had hurt a lot of people but didn’t know the value of money or what a normal life could be. She never had a normal life. She just wanted to have her own life, and in the process, she became the defector of USSR. If India had allowed her to stay, she would have lived there. She was an intelligent woman, seeking love and warmth, and had seemed to find that in India,” says Gravenhorst, who was unable to shoot in India and London, for paucity of funds.

Nevertheless, Gravenhorst and the director Jobst Knigge decided against portraying Svetlana as a tough person to deal with. “We liked her; we could not make a film about someone we didn’t like,” says Gravenhorst.

Yet, Gravenhorst intends to give people a piece of recent history. But she feels that it would get people to discuss the implications of the international politics determining a woman's life. “People will see her as a friendly old woman but they will not discuss it much. But I was determined to show how the daughter of a tyrant, a defector that the US embraced, and a woman who once lived in a fine house in Princeton with a large piano and an elegant life, died a lonely death in the midst of nowhere,” says Gravenhorst.

Svetlana saw death from a close range. Her son from her first marriage died very young, and she was unable to go for his funeral. Her daughter from her second marriage lives near Siberia, but, according to both Schad and Gravenhorst, does not want to stay connected to the family. Svetlana did not have any children with Brajesh Singh. But her daughter Olga, from Svetlana's marriage to Peters, lives in Oregon and has assumed a new identity. She was contacted by Gravenhorst but did not wish to have anything to speak about her relationship to her mother.

Towards the end of the documentary is a grainy scene, shot in Svetlana's home in Wisconsin. It was a camera set up by Schad, when she had visited her in 2008. Scahd asked Svetlana about her father, and a visibly old Svetlana said that she did not want to talk about her father. She then pauses, and then bangs on the table, throws the papers and books that collapse the table lamp, even as she screams, “Don't ask about my father!” Schad's voice is heard in the background, and she assures her that she can speak about things that only she prefers. Moments later, a calm Svetlana, begins to speak: “My father....”

Schad says, “Svetlana tried to escape being Stalin's daughter, but she was always his daughter.”