A 23-year-old was shot dead at a checkpoint in the northern Jordan Valley on 26 June. Izzedine Bani Gharra, 21, was shot and killed during an arrest raid on the Jenin refugee camp on 10 June and Abdallah Ghuneimat, also 21, was killed during a raid on the Kafr Malik village northeast of Ramallah. His family told The Electronic Intifada that Ghuneimat was left to bleed to death pinned under an Israeli military jeep before the army allowed medics to reach him.

Two Israeli civilians were shot and killed in the West Bank in June and two Border Police soldiers were stabbed and injured by Palestinians.

Israeli forces uprooted approximately 20,000 saplings planted by the Palestinian Authority Ministry of Agriculture near the town of Tubas. The Israeli authorities claimed that the land the trees were planted on is designated as both a natural reserve and a military firing zone.

In the Gaza Strip, fishermen and farmers came under constant Israeli fire, resulting in injuries and property damage.

The Israeli navy intercepted in international waters a boat of activists attempting to break the siege on Gaza; video showed the commandos using brutal violence against the civilian passengers on board.

Rafah crossing, the sole point of exit and entry for the vast majority of the 1.8 million Palestinians in Gaza, was open in both directions for nine days during June, allowing the movement of restricted numbers of Palestinians, mainly medical patients and students. According to the United Nations monitoring group OCHA, approximately 7,500 Palestinians had exited Gaza via Rafah between 1 January and 29 June, compared to 18,225 Palestinians during the first half of 2014.

In late June a Palestine Liberation Organization executive committee member warned that 150,000 Palestinian refugees in four camps on the outskirts of the Syrian capital of Damascus faced imminent danger amid fighting between Syrian government forces, rebel groups and Jabhat al-Nusra, al-Qaida’s affiliate in the country.

Meanwhile, activists in Yarmouk told the Action Group for Palestinians in Syria that reports that Islamic State fighters had withdrawn from the besieged camp were not true. 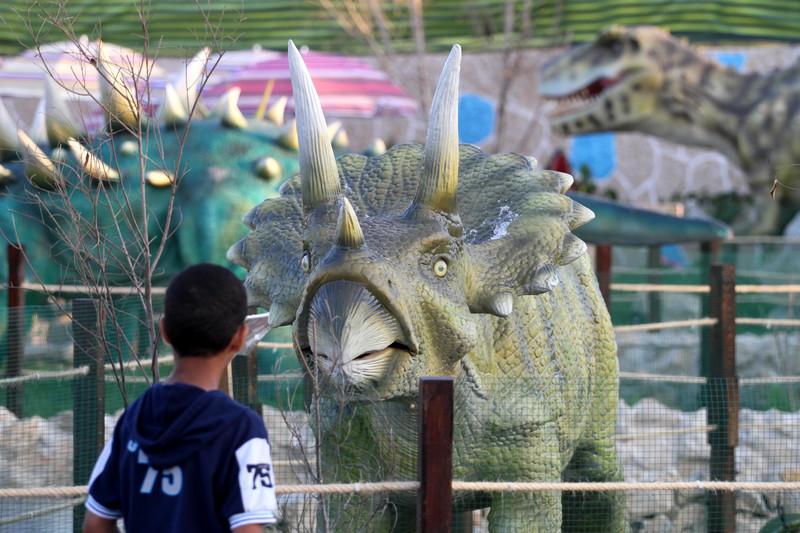 A Palestinian boy observes a dinosaur model at the Sharm park in the central Gaza Strip, 17 June. 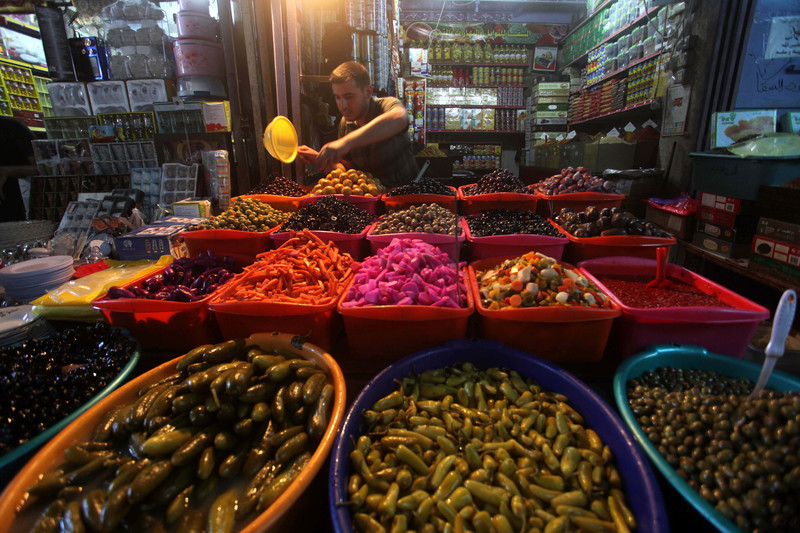 A Palestinian vendor sells pickles at a Gaza City market ahead of the month of Ramadan, 17 June. 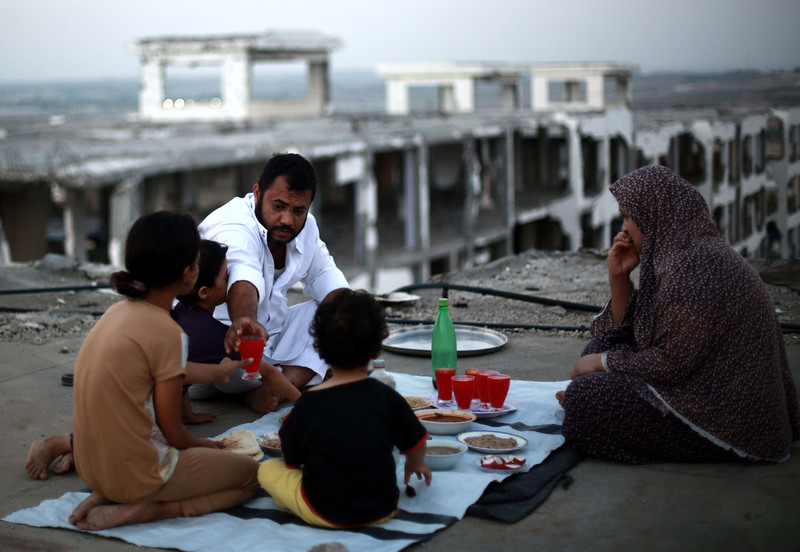 A Palestinian family break their Ramadan fast on the remains of their house which was destroyed during Israel’s 51-day assault last summer, Beit Lahia, northern Gaza Strip, 19 June. 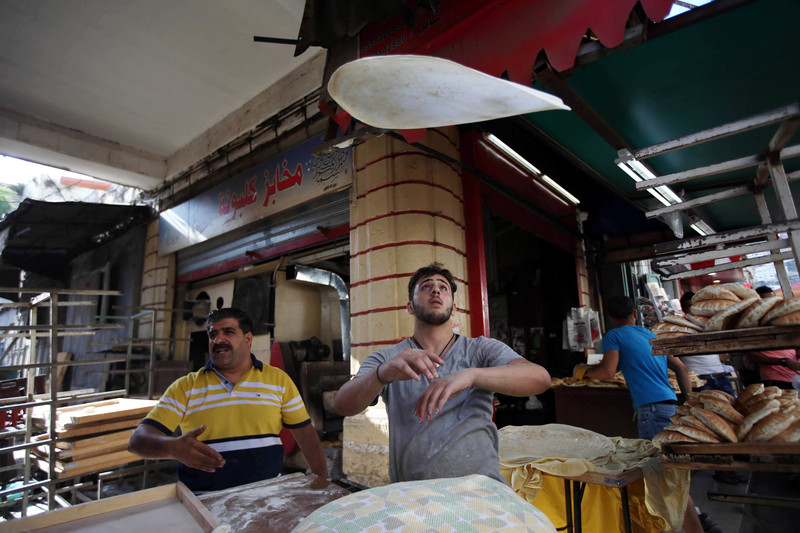 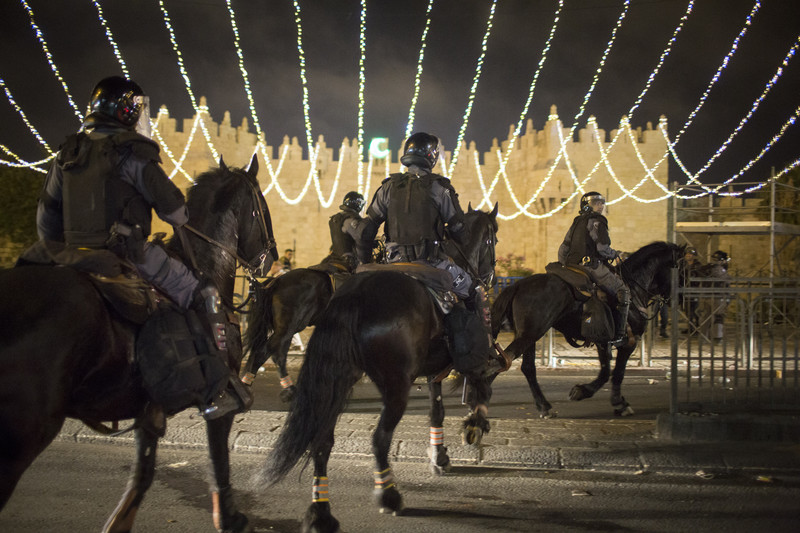 Mounted Israeli police disperse Palestinians at the end of the Ramadan fast outside Jerusalem’s Old City on 21 June. Earlier that day, a Palestinian youth stabbed and injured an Israeli Border Police soldier. 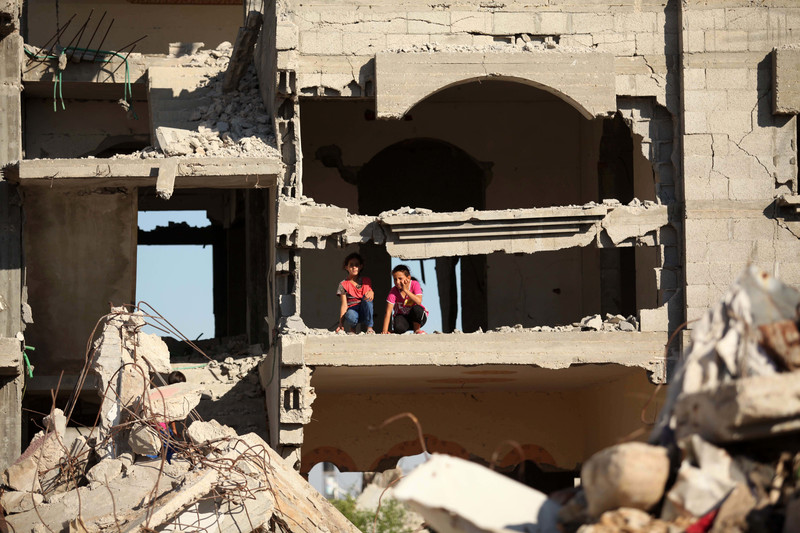 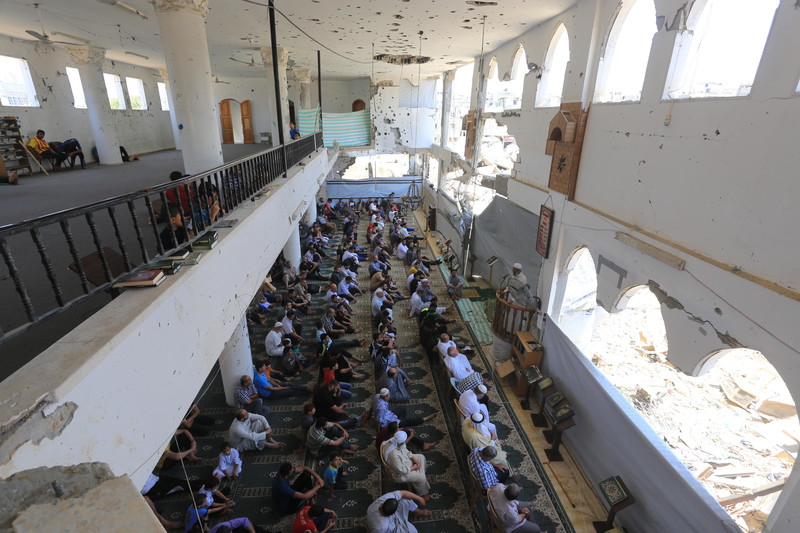 Worshipers attend Friday prayer at a mosque destroyed by Israel during the 51-day assault on Gaza last year, east of Gaza City, 26 June. 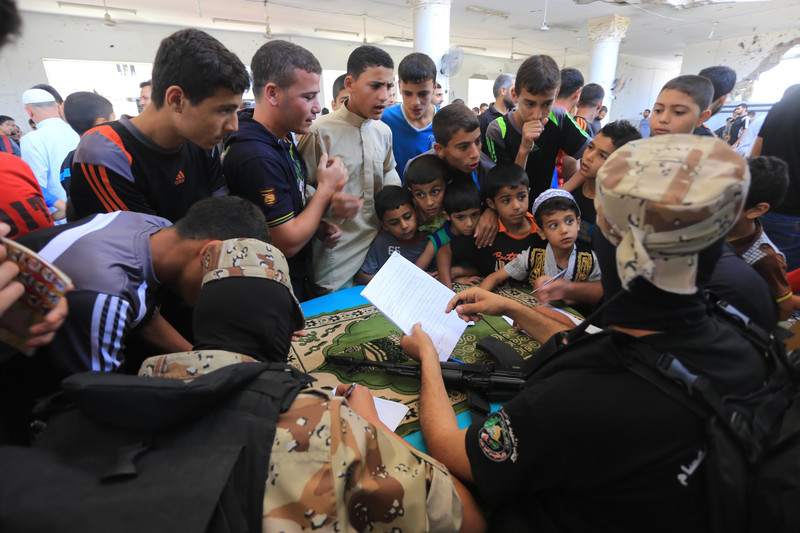 Palestinians boys queue to register for the summer camps organized by the Qassam Brigades, the armed wing of Hamas movement, at a mosque destroyed during Israel’s assault last summer, east of Gaza City, 26 June. 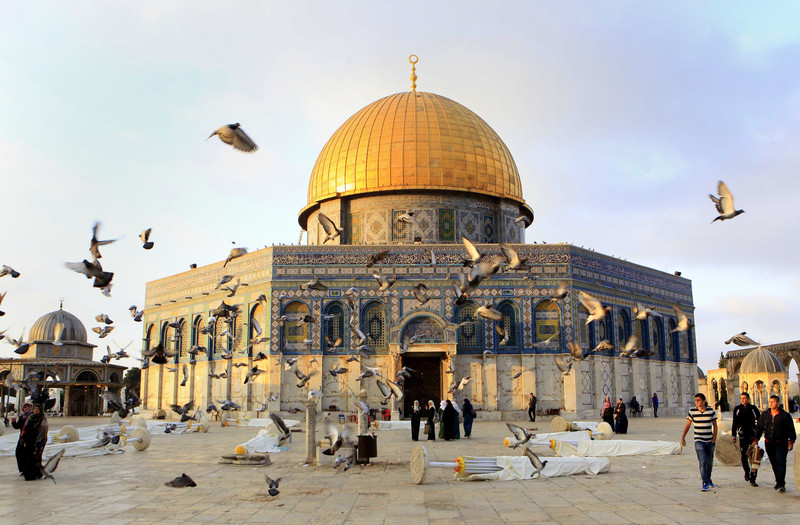 Shadi HatemAPA images The Dome of the Rock at the al-Aqsa mosque compound in Jerusalem during the month of Ramadan, 27 June. 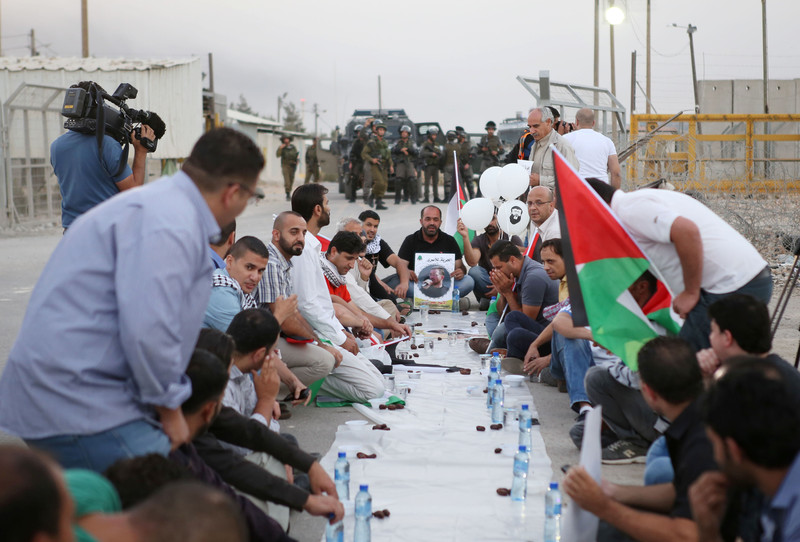 Palestinian protesters break their Ramadan fast during a protest calling for the release of political prisoners outside Ofer Israeli military prison near the West Bank city of Ramallah on 27 June. 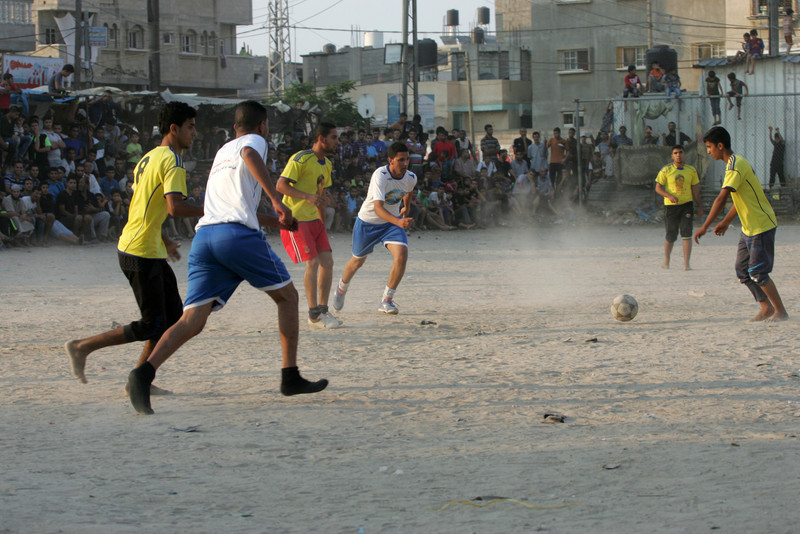 Palestinian youths compete in a football match at a refugee camp in Rafah, southern Gaza Strip, on 28 June. 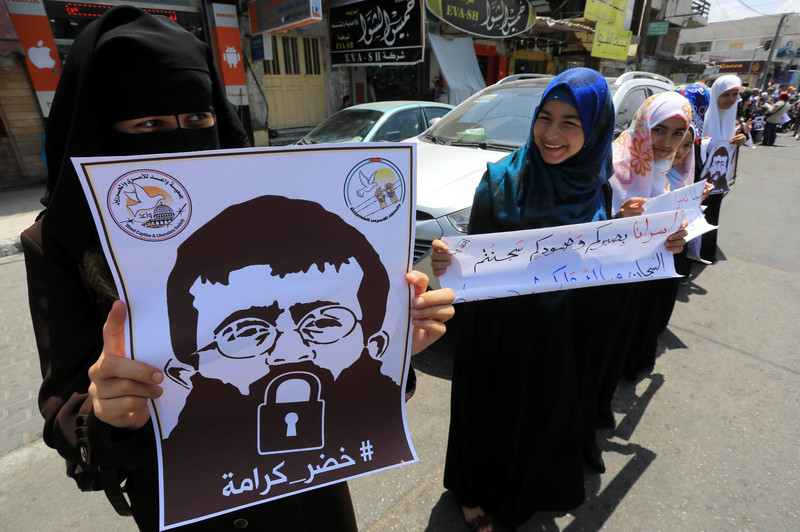 Palestinians hold posters of hunger striking prisoner Khader Adnan during a Gaza City protest calling for his release, 28 June. Adnan had been on hunger strike for nearly 55 days in protest against his detention by Israel without charge or trial; a deal was reached for his release and ending his strike. 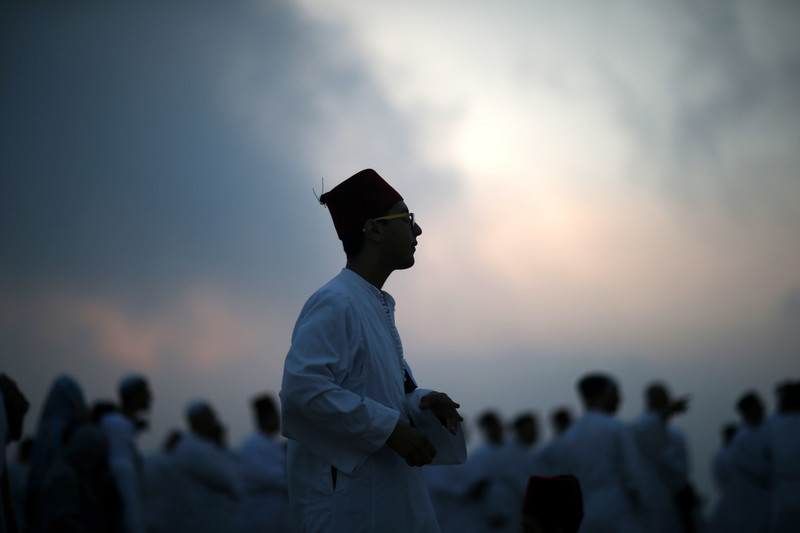 Members of the Samaritan sect pray atop Mount Gerizim near the West Bank city of Nablus after sunrise on 28 June as the community celebrate the Shavuot religious holiday. 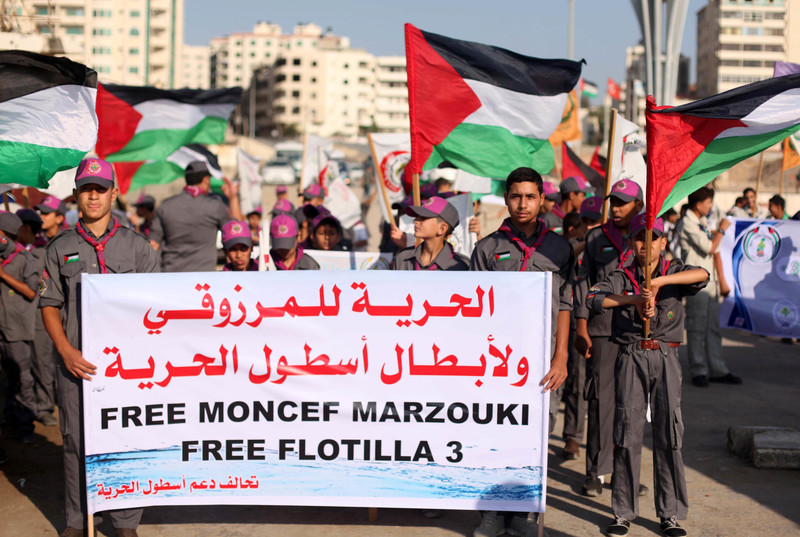 Palestinian scouts carry banners and their national flag during a protest at Gaza’s port against Israel’s intercepting of a boat of international activists who were attempting to break the naval blockade of Gaza, 29 June. 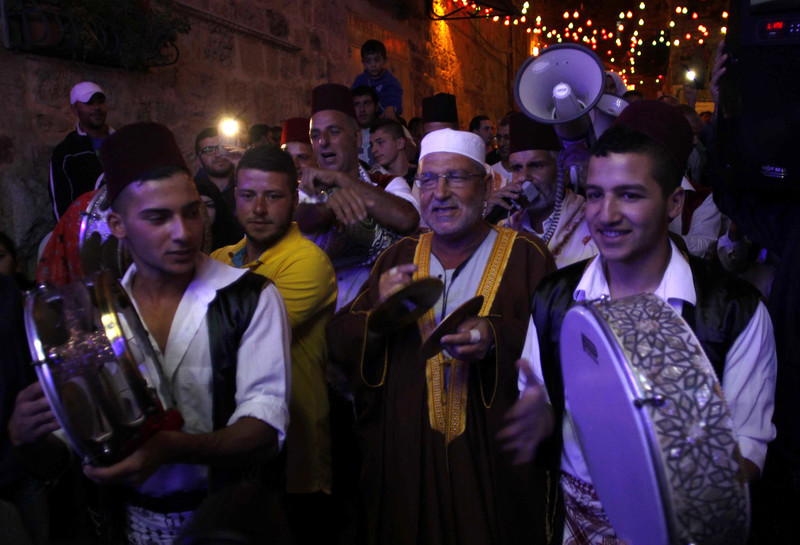 Sufis parade through the streets of Jerusalem’s Old City during the month of Ramadan on 29 June.