Arjun Appadurai has written about ethnoscapes (spaces produced through inflow of people such as immigrants, refugees, etc.) technoscapes (inflow of technology, etc.), finanscapes (flow of global capital, commodities, etc.), mediascapes (the repertoires of images and information) and ideoscapes (ideological shifts connected to Western world views. These are different ways of looking at the global cultural flows strongly influenced by perspective, overlapping, and the rapidly shifting instability and mutability of global cultural flows. Indian filmmakers are fond of making the city the central protagonist of a film. Masaan is no exception, albeit with a difference.

Masaan shifts our vision from the glamorous chutzpah of cities like Bombay, Delhi, Bangalore and Kolkata where most Hindi films are located to a relatively subordinated ‘smaller’ city like Varanasi. The city represents itself through the stories of five characters trapped while trying to discover/rediscover themselves between the ancient that the city represents and the modern the city cannot reject. Masaan means ‘crematorium.’ The depressing connotation is belied by the form and content that is more character-centric where the incidents emerge out of the characters and their interactions between and among them rather than the other way round.

Appadurai’s theory about ethnoscapes is partly fulfilled in Masaan by virtue of youngsters from outside the city arriving for education or employment and youngsters trying to move away. Technoscapes weave themselves via computer classes, social networking sites, cell phones with cameras, videocams and song recording systems, etc. All these are juxtaposed against the Harishchandra Ghat with its steady flow of dead bodies lit up by the raging flames of the funeral pyres with the domes (chandals) stoking the fires with sticks and beating up the bones and the skulls so that the bodies can burn quickly. Mediascapes are present through the corrupt police officer’s video shots of the young Devi trapped in a sexual encounter in a hotel which he uses to blackmail her and her father. And ideoscapes are portrayed through the rapidly changing sexual morals of youngsters in the city that includes an ordinary clerk/peon making a pass at a young, educated girl, or another young man kissing a young girl on impulse and being kissed back in return, and youngsters from two opposite points of the caste ladder accepting this reality yet prepared to confront it. 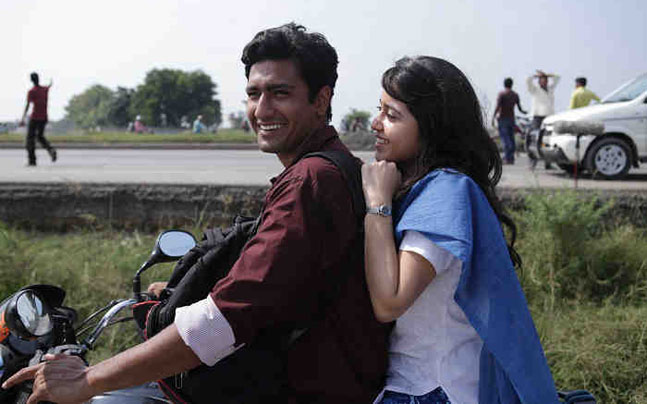 A still from Masaan

Everything happens smoothly and incidentally and is not put in by design. The audience is sucked into the small-town ambience of Varanasi with its generation gaps, it dreams and fantasies, its small love stories and clandestine sex in hotel rooms and deaths and cremations. Masaan haunts you long after it is over. Though generously punctuated with dead bodies being carried and burnt at the Harishchandra Ghat, the people dotting the stories consciously or otherwise keep clinging to that elusive creature called “hope”.

The film opens with a young girl Devi Pathak (Richa Chada) stepping into a hotel to have sex with a young boy – their initiation into sex minus a love affair attached. But the boy while trying to escape through the toilet window cuts his wrist in an accident and dies later. Devi’s father, Vidyadhar Pathak (Ssanjai Mishra), a Sanskrit scholar and translator is shocked and threatened to part with Rs. 3 lakh by the police inspector. The father has a small shop selling flowers and chunris and pooja materials on the Harishchandra Ghat helped by Jhonta (Nikhil Sahni) a naughty orphan boy eager to please the old man.

Deepak Choudhary (Vicky Kaushal) is a young boy from a ‘dom’ family who studies civil engineering at night school and helps his father and uncle at the ghat burning dead bodies. He falls in love with a college-going, sprightly, poetry-loving young girl Shaalu Gupta (Shweta Tiwari) who is from a well-to-family from a higher caste. What happens to these five characters as they journey through life beside the flow of the Ganges brimming with the ashes of cremated dead bodies in circumstances disturbed by tragedy and loss of hope to reach a different destination makes Masaan a watch-worthy film. 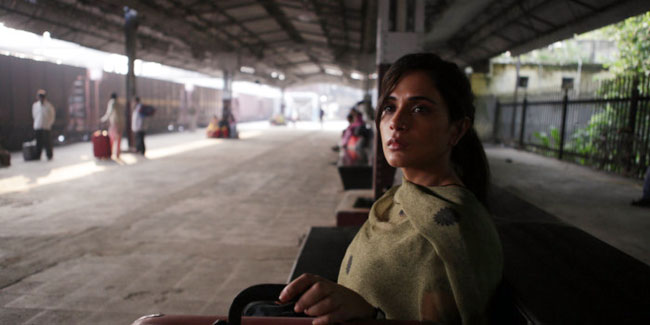 A still from Masaan

What begins in a seedy hotel room ends on the sangam of Ganga-Jamuna-Saraswati in Devaprayag, Allahabad. The two lost souls, Devi and Deepak who meet each other for the first time on the banks of Ganga-Jamuna get onto a boat sailing towards the Sangam. The boat gets smaller and smaller enlarging the canvas of the river in the backdrop kissing the sky.

Avinash Arun’s cinematography captures the magic on the Harishchandra and other neighbouring ghats with the flames from the burning pyres rising into the sky, the small shop, the steps that lead to the waters and becomes a platform for small boys to earn some quick money at risk is filled with mellow yellows and browns juxtaposed against the neutral colours of the offices and station counters and waiting rooms. A pink gas balloon floating up into the sky on Durga Pooja becomes a metaphor for the young lovers. Siennas, browns and yellows bring out the essence of the city of Varanasi

Varun Grover’s crisp dialogue and tight script add to the honesty of the film while Ranjit Singh’s production design effectively toys around with the ambience of the indoor locations – the hotel room, Devi’s small flat, the terrace of Shaalu’s home with the laundry hung up to dry standing in contrast to the .dingy room where Deepak sits down to dine with the family in the midst of squabbles and a perpetually drunk father (Vineet Kumar). Bruno Coulais’s background score is mood-centric, low-key and subdued against the loudness of the song numbers where the philosophical mann kasturi re chips away from your being are a bit too loud against the visuals that slowly move towards peace and harmony. The sound track is sometimes punctured with news from the television caught of-screen linking to the main story in some way or another.

With the combination of known and unknown faces, Neeraj has pulled off a solid casting coup. Richa Chadha defines a character that speaks little, but says a lot through her dignity and self-respect and lack of guilt. If she feels guilty, it is because the boy died. Vicky as the ambitious but confused young Deepak does extremely well and is matched scene for scene by debutante and bubbly Sweta Tripathi as Shaalu. Sanjay Mishra is a veteran in essaying the role he was picked up to play. Nikhiil as Jhonta picked up by Neeraj from the ghats is a wonderful surprise. However, the ghat is so focussed on the burning of the pyres that other small aspects of the ghats of Varanasi are not included at all such as – family priests performing poojas for the dead, grieving families of the dead, wrestlers having a match on the ghats and so on.

Neeraj enhances the telling of his story with small but significant touches you might miss if you are not attentive. Among these are - Jhonta stealing rosogollas while Pathak-ji is talking with some elders, Shaalu reciting shers (poetry) through the cell phone to Deepak who does not follow a word of her recitation, Deepak offering water to the crying Devi on the ghats of the Ganges in Prayag though they are complete strangers, Devi suddenly making kheer for her father and so on.

Neeraj has used two minute objects as catalytic agents to trigger a metamorphosis from hopelessness to hope in Deepak and Devi’s lives. Deepak who clings on to Shaalu’s ruby-encrusted ring as his memory of his girlfriend, finally casts it angrily into the Ganges. He jumps into the river again to retrieve it but it is lost. Much later, Jhonta finds the ring during one of his risky swimming races to fetch coins and hands it to Pathak-ji to help him tide over the blackmail threat. Devi keeps a small purple-paper wrapped little box which she never opens. It was gifted to her by the boy she slept with and she just cannot let go of it until she has handed it over to the boy’s grieving parents. In Allahabad, she slowly allows it to float away in the waters of the river that offers her hope of a new life across the horizon.

The two awards at Cannes were not for nothing.