Ahalya, written, scripted and directed by Sujoy Ghosh famous for his Kahaani, is a different film not only in terms of form and content but also in terms of revolutionizing the very way in which films are viewed in our country.

Ahalya is the first in this new venture. There is another unique ‘first.’ It spans just under 15 minutes of screening time with a complete story that has a beginning, a middle and an end. This is a challenge for both the director and his audience that is conditioned to sit back and watch a story film spanning two hours or more. 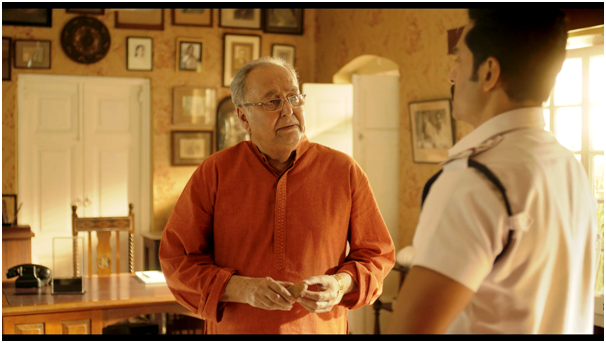 This film will not release in the theatres but has already been released on YouTube for free viewing. It is short enough not to make the viewer click away from the intrigue, the suspense, the magic realism. The questions they raise have been so tightly knit that the viewer is hooked to watch what happens in the electrifying climax. Reportedly, till date, it has had more than three lakh hits on YouTube alone opening up an alternative channel for viewership cutting down on promotional and marketing costs as there are none except posting the link on social networking sites. Production costs are also minimal because the films are going to be really short, making the “large” in the Large Short film a metaphor for dynamic storytelling on celluloid.

The story of Ahalya is inspired from its mythological counterpart, Ahalya in the Ramayana contemporised, relocated and reversed to throw up a bold and feminist reading for those who wish to read it that way. For those who do not, it still sustains its patriarchal stance in a different way because it is rooted in the present in the multi-cultural and multi-lingual city of Kolkata. In the mythical story, Ahalya, created by the God Brahma as the most beautiful woman, was married to the much older sage Maharishi Gautama. It is said that Lord Indra, who had an eye on this beautiful woman, disguised himself as Gautama when the sage was away, and slept with Ahalya who had no clue that this man was not her husband. When Gautama learnt what had happened, he cursed his wife and turned her into stone, not considering that she was tricked into the liaison. Years later, the story goes that she was liberated from her captivity as a stone when Lord Rama’s foot brushed against the stone. There are different versions of this story but Indra’s seduction of a beautiful woman who is the wife of another and Ahalya’s punishment for a crime she never committed are common in all versions.

Sujoy Ghosh’s version offers varied readings of the text. Indra Sen (Tota Roychoudhury), an inspector comes knocking at the door of a famous sculptor, Gautam Sadhu (Soumitra Chatterjee) looking for a young man who has gone missing and was last seen coming out of this house. Gautama Sadhu’s very young and attractive wife Ahalya (Radhika Apte), dressed tantalizingly in a very short, translucent and strapped white dress, offers him tea, brushing against him as if by accident and clambers to the upper floor of the duplex apartment. Gautama shows Indra a magic stone that, when touched, can turn the one touching it into the person he wishes to become. When Sen rubbishes this and is about to arrest Sadhu, he dares to ask him to touch the stone and imagine he is Sadhu. What happens makes for an exciting climax that raises more questions than offers pat answers.

We do not see Indra again but we can hear his desperate screams for help emerging from the darkness as if from within that magic stone Sadhu dared him to touch. A row of exquisitely crafted dolls modelled on young men rests on top of a showcase in the Sadhus’ living room. The dolls topple and drop to the floor whenever a new visitor enters the apartment. When Indra first takes a closer look, he finds that the last man on the row is a replica of the missing man in the photograph he is carrying. In the end, we find Indra’s tiny but exquisite model standing at the end of that row of dolls. Has Sen been imprisoned in the stone and then captured in the doll crafted by Sadhu, the sculptor who credits his creativity entirely to his beautiful young wife? Keep guessing and the answer might still elude you because this is not the Ahalya story you read in The Ramayana.

When the doorbell rings again and a young man, kept out of focus enters, a doll falls again and Ahalya teases the doll saying he must not be naughty like the rest. This is the doll that is the exact replica of the police officer. Has Sadhu conspired with his wife to keep the men who desired her imprisoned first inside the magic stone and then turned into a doll in his creative and dexterous hands? Or is Ahalya innocent of her older husband’s diabolic machinations because when the inspector enters her bedroom, she actually sees Gautama in him and not the police officer she offered tea to? The question will keep dogging you without offering you answers to satisfy you. This could be an on-going game devised and executed by an old man “not that good in bed” avenging the young men his wife sleeps with. Or, it could be this - the Ahalya of 2015 avenges the wrong done to her mythological alter-ego by imprisoning (killing) every 'Indra' who comes to her, seduces him and in a manner of speaking, 'uses' her (impotent?) husband to ensnare the 'Indras' and then, literally turn them into beautiful dolls with the help of Gautama to decorate her drawing room with. What a revenge and created by a male director at that!

Ghosh has used very low key music as the background score but has interwoven a few lines of a telling Tagore song – esho esho amaar ghare esho (Will you step into my chamber?)in the beginning of the film. The editing, as it cuts from a doll falling off the shelf-top with a thud to a mid-close shot of the surprised look on the face of Indra, or cutting from Indra touching his face and then shocked to discover that his reflection shows Sadhu instead of him is very crisp and smooth where it could have been jerky and jarring. The use of a black screen towards the end could be confusing until one hears the screaming voice of Indra that tells you that he is shouting from inside the dark world of the stone he has been captured within. The colours veering between browns and ochres and yellows is thrown in relief against the white of Ahalya’s dress and Indra’s uniform contrasting with the reddish kurta Sadhu wears. The very brief time span of the story keeps the suspense alive. The sub-titles are crisp and positioned so well that they do not intrude into the visuals.

Sujoy Ghosh’s casting of Tota Roychoudhury as the police officer, Soumitra as the two-faced Sadhu and the sensual and very attractive Radhika Apte as Ahalya could not have been more apt or ideal. In short, to use a naughty simile – Ahalya is like an attractive girl’s skirt – long enough to cover the subject matter and short enough to arouse curiosity!