That Table In Shimla Where History Was Written

Jinnah proceeding to the Viceregal Lodge in Shimla before Partition

To go around that table in Shimla is eerie. This is that same table used by a handful of men to draw lines on a map that changed the destiny of millions of people overnight, in 1947.

That table still stands in the visitor's room of the former Viceregal Lodge, Shimla's imposing Elizabethan castle in grey sandstone that was once the official summer residence of British viceroys in South Asia.

The home now of the Indian Institute of Advanced Study, the sprawling English garden surrounding the lofty lodge is where Jawaharlal Nehru and Mohammad Ali Jinnah had strolled together in June 1945 in an attempt to sort out differences over the fate of South Asia after the retreat of the British. This is the same place where Jinnah had refused to shake hands with Maulana Azad, Congress president who did not believe that the two nation theory was a viable solution to challenges faced by the Muslim population of South Asia. 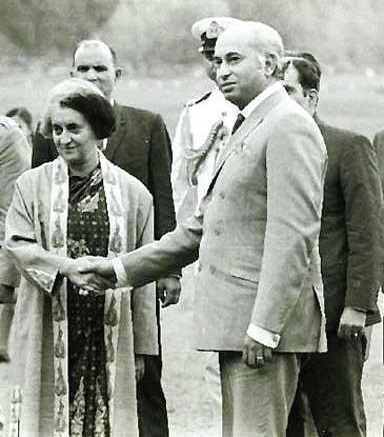 All these men had met here on the invitation of Viceroy Lord Wavell in the summer of 1945 for the Simla Conference to find Jinnah insisting on an independent Pakistan.

Although MK Gandhi did not participate in the talks, he was very much in the city during the crucial conference that concluded without a compromise. Later in May 1947 Lord Mountbatten showed his first plan for the partition of South Asia here, on the same table.

It was Sir Cyril Radcliffe who was given two months to chalk out the boundary between India and Pakistan. In Simla, Radcliffe was optimistic that at the final meeting differences would be resolved. But the four members of the Radcliffe Commission two Muslims, a Hindu and a Sikh had disagreed so much that Sir took upon himself to do the needful.

Soon after that fatal decision taken by Radcliffe at least ten million people died in riots that took place after the partition of South Asia and millions of other people were taken unawares by decisions made on their behalf by a handful of politicians in consort with those in power.

Standing before the table evokes memories of Saadat Hasan Manto's haunting short story Toba Tek Singh as well. In the story inmates of a lunatic asylum are separated. The Muslim inmates are forced to transfer to Pakistan, and Hindu and Sikhs to India during the murderous partition of South Asia.

Lingering by the table a little longer is to recall Partition, the 1987 film that is a powerful cinematic experience based on the same story of Toba Tek Singh. In the film the same actors play inmates of the asylum as well rulers who are seen huddled around a table covered in maps. The lunatics in Partition often sound saner than those shown in the corridors of power.

Yet another historic event took place here that remains inconclusive. Although not around this table, India's Indira Gandhi and Pakistan's Zulfikar Ali Bhutto too met in Shimla to sign an agreement. This was at the Barnes Court in a location opposite to the Viceregal Lodge on the other side of the city.

Now the Raj Bhawan or the official residence of the governor of Himachal Pradesh, Barnes Court was at that time the state guest house. Prime minister Indira Gandhi was in town two days before the arrival of Zulfikar Ali Bhutto who came with daughter Benazir for the summit.

Indira Gandhi personally saw to the decor of the rooms in polished teak wood panelling to be used by the Bhuttos during their stay in Shimla.

Benazir's room was draped in pastel pink and green shades while father Bhutto's bedroom was lined with a generous stock of his favourite cigars.

The dining and wining between those in power in India and Pakistan continues to this day even as hostility born on that table nearly seven decades ago only gets older.