Kanpur: The Slow Decline of a Historic Legacy

The majestic clock in the clock tower adjoining the red bricked Lal Imli textile mill factory of the British era still ticks. But the spinning machines within its walls are in a state of deafening silence.

The once thriving textile industry in Kanpur is now almost defunct. The factory that started with manufacturing army blankets in 1876 now sees quietness and stands splendidly in place for passerby’s to gaze at with ignorance.

A couple of kilometers away lies another demised, Elgin Mills, which once manufactured the best cotton in the country. Sadly, it is now nonoperational with its walls stained with political messages and posters.

Kanpur holds a significant position in the history of modern India. It was once a hub of affluence and urban well-being with a notable role in India’s freedom struggle.It was eyewitness to the dawn of India’s first war of Independence in 1857. It boasted of India’s first IIT, one of the first Ordnance factory (Still running), a parachute factory and multiple leather and textile mills, of which many have closed down. 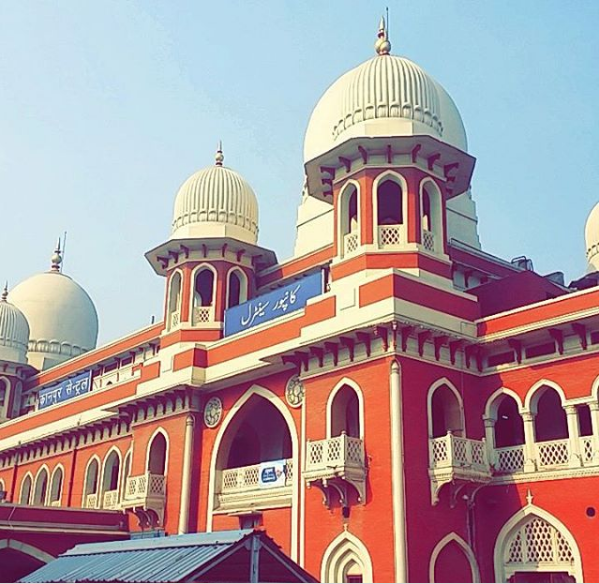 The city is flagged with not just unoccupied ghost mills but a non-functional power house as well. The shutting down of the factories left thousands unwaged and triggered an upsurge in crimes in the city.

The power outages, pollution due to the animal release from leather tanneries which has choked the Ganges and the law and order situation has sullied the living conditions in the city. Power cuts last for close to 15 hours and angry citizens are tired and fed up with the non-responsiveness of the concerned authorities. People do everything to induce some nectar in their wires so that they can get electricity.

The tentacles of modern day have managed to engulf its historical legacy. It is declining and the political parties have not done much to stem the ongoing downslide of the largest city of Uttar Pradesh.

“A lot of families like ours are leaving the city and shifting to Delhi because we don’t want to starve for basic necessities.” says Suman Gupta, now a resident of Sarita Vihar who shifted from Kanpur 5 years back. Another resident Naveen Gupta adds, “We got used to living with no electricity and mediocre education but we do not want our kids to. We prefer sending them out to study because there is assurance of good education and living facilities.”

Today, the city does not seem to know where it is paving. The fossilized factories are a reminder that for the British, this city was the hub of economic prosperity, and industrialization in the Northern part of India, but in the successive years, other modern issues such as caste politics overshadowed the richness of the city.

The question that arises is, what happened, to all those industries that had once earned Kanpur the soubriquet the ‘Manchester of the East’? What has made the quality of life in this once pulsating city so pitiful? The reasons are many.

The major economic activities in Kanpur today are leather tanneries, engineering tools and fertilizers. There are also a few dozen small and medium sized businesses which produce pickles, spices, notebooks, processed foods and plastic, which caters to a few thousand low paying jobs.

There are many leather industrial and processing units in Kanpur which has led to the dwindling of the quality of the water in Ganga, which flows right beside the tanneries. It has deteriorated on account of waste like animal fat and other poisonous chemicals released from the tanneries. This has in turn degraded the quality of water consumed, given that the Ganges water is what is recycled and processed for consumption by citizens.

The government there is well acquainted with the industrial hassles in the city given the fact that UP State Industrial Corporation (UPSIDC) is located in Kanpur.

According to Indian Industries Association, the reasons for hindered growth of Kanpur are bad roads in industrial areas, lopsided power supply, unchecked pollution, and dearth of proficient labor force.

Kanpur is geographically juxtaposed with Lucknow which is 90 km from Kanpur and can be reached by the National highway in two hours. This proximity coupled with the poor living conditions of Kanpur has given many government and private officials who work in Kanpur the liberty to shift base to Lucknow. It is remarkable how despite the city being cheaper than Lucknow in terms of renting property, transport, and food, people are drifting out of the city.

Today, the only two industries doing well in Kanpur are hosiery and leather. The 15,000 workers employed in the shoe industry also shifted base to Agra since the 1980s.

Even the state Government seems to be certain that Kanpur's glory days are over. Already, a unit of the Industries Directorate has been moved to Lucknow, and other financial and industrial development bodies might follow suit. Leather Industry continues to flourish, but the head office of the Leather Export Promotion Council has moved to Madras.

Politicians from an assortment of political cliques have represented the city in the Lok Sabha. It has seen representation from the Communist party of India (1957-71) followed by Manohar Lal of the then Janata Party which in 1977 galloped its way through the anti-emergency sentiment in the country to get elected into the Lok Sabha. The Congress party took over in 1980 and then again in 1984. CPI(M) made a comeback in 1989. The Congress was back in 1999 and so on and so forth.

As per popular belief it was labor trouble enflamed by trade unions which caused the industrial decay however, the trade unions claim that politics between the center and the state was a bigger reason.

The regional parties, BSP and SP, have been indifferent to resuscitate the mills since it would produce political bonuses for the Centre and not them. During the state elections, every party leader makes assurances of restoration, only to repeat the past promises in their manifesto for the next elections.

If Kanpur is in a state of fatal decay, the difficulties seem pervasive and insoluble: incessant power cuts, high rates of sales tax, insufficiency of raw material and nonexistence of infrastructure have plagued the city.

Yet, Kanpur is UP’s top taxpaying city. Shopping malls have sprouted, one can experience display of high end fashion in city parties, and there are multiple luxury homes. It also has two central universities, one being HBTI which was recently given university status after a long demand by students and teachers. This is evidence that city has been a cradle of prosperity to many.

The city is further plagued by issues of pollution, shortage of water and electricity, safety for women with women being molested, eve-teased, ogled at and numerous instances of chain snatching in the plush areas of the city.“I can never go out of the house after six alone. The street lights do not work and boys ride on their bikes rashly hooting and whistling at you. I feel unsafe and feed the need to cover myself well when I go out, that doesn’t help though” says Aparna Bansal, a resident of opulent VIP road and student of DG Girls College in Kanpur University.

Another election is around the corner but Kanpur is now cynical, with the people dissatisfied with the city that once was a flourishing economy with a matching lifestyle.