Football in India has been on an escalator ever since Indian Super League (ISL) kissed the sports calendar a couple of years ago. The franchise-based league flew down legends (Alessandro Del Piero, Nicolas Anelka, Roberto Carlos and more) amid much fanfare and glamour. If their temporary stay left a question mark, the beautiful game has come up with an answer – Premier Futsal.

Taking a leaf out of Twenty20 cricket, the bikini-format of the sport raised its curtain in India on Friday – July 15, 2016 — with legendary names like Ronaldinho (Brazil), Ryan Giggs (Wales), Paul Scholes (England) and Hernan Crespo (Argentina) in the mix.

So what is Futsal all about?

It is an alternative form of association football played five-a-side within closed doors. The form supports unlimited substitutions 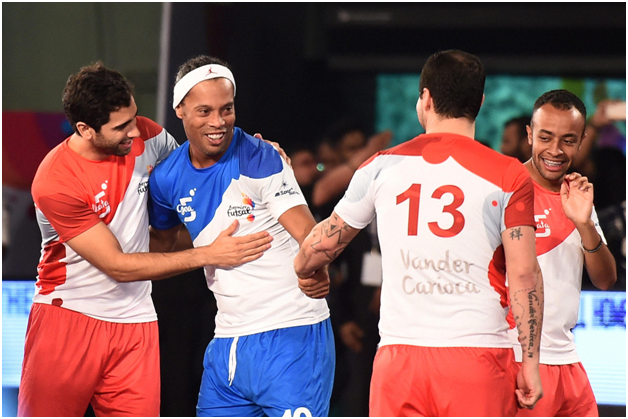 The name comes from fútbol sala (Spanish). One may also call it room football or indoor football.

There were attempts to question the authenticity of the tournament even before its inception.

All India Football Federation (AIFF) President Praful Patel openly slammed India cricketer Virat Kohli – who is the league ambassador – for associating himself with the event which isn’t recognised by AIFF.

“Any brand ambassador of an ISL franchise cannot do the same for a league not recognised by AIFF or FIFA,” he had tweeted.

The AIFF probably had own plans of organising the five-a-side carnival; unfortunately, Premier Futsal gained shape much before. 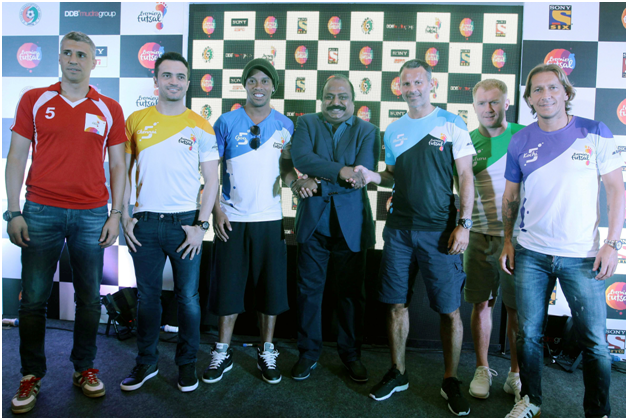 Though there are six franchises – Chennai, Mumbai, Kolkata, Bengaluru, Kochi and Goa, the fair will be confined to Chennai (Jawaharlal Nehru Indoor Stadium) and Goa (Peddem Sports Complex).

“Amidst all the false allegations and attempts to tarnish the image of Premier Futsal, we are proud to kick-start our inaugural edition. It was a strategic decision to host the league in just two cities; Chennai and Goa, and with six franchises. We have managed to secure signatures of players who are the legends of the game. As Premier Futsal Management, we are committed to grow Futsal here in India and we will expand the league to other cities in the future editions,” said Premier Futsal co-founder Nithyashree Subban.

AIFF General Secretary Kushal Das added to the slug fest. He called it an unsanctioned league as AIFF is the only governing body for Futsal in India and an event went ahead without their participation. 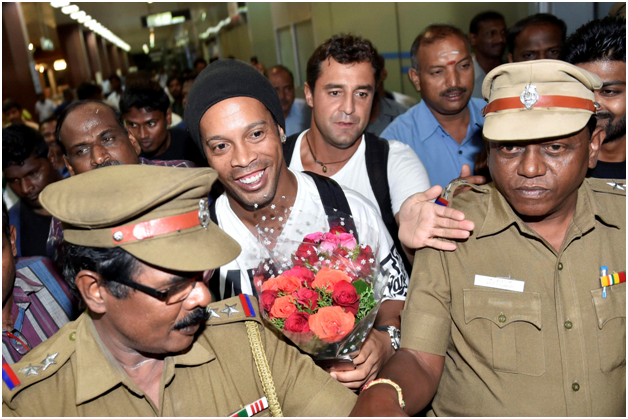 Nonetheless, none could stop the glamorous curtain raiser of the tournament here. More than anybody else, fans thronged the airport to catch a glimpse of their heroes.

Manchester United, with a strong fan base in India, would be happy to know the madness behind the signing of Giggs and Scholes in Futsal.

“I was totally surprised at the number of people who turned up at the airport to welcome us. I was told there are a lot of Manchester United fans here, but I was pleasantly surprised to know that it was beyond my expectations,” Scholes (former Manchester United), who will lead the Bengaluru team, said.

Ronaldinho, Brazil’s World Cup hero of 2002, also a star with FC Barcelona is the most popular among the bunch.

Co-incidentally, Ronaldinho’s career started off with Futsal before he rubbed shoulders with the likes of Ronaldo and Rivaldo.

“It feels wonderful to be back in India amongst such a passionate and kind audience. It feels even better when you are back to playing the game that you started off playing with – Futsal.

“After all these years, it will be unique experience to be playing against the best futsallers and my friends who I have played against in the past. I am delighted to back in a playing capacity this time and I would like to thank Premier Futsal for bringing back my memories from childhood of playing Futsal back home,” said the 36-year-old who represented Brazil from 1999-2003 with 33 goals under his belt in 97 appearances. He will represent Goa in the event.

Giggs, the Manchester vintage, will turn out for the Mumbai franchise. With the madness and frenzy surrounding his former club, he remains one of the top head turners in Premier Futsal.

“It will be a different experience. With so much been spoken about the importance of Futsal and how it helps football players become better – I would love to see how I fare amongst the best in the business of Futsal. Several countries across the world are now embracing Futsal at the academy level to improve the game of kids at a very young age,” said Giggs who never changed loyalties in the English Premier League. The 42-year-old started off with United in 1990. As a player, he called it a day in 2014 but was hired as the assistant manager last season.

“I am delighted that entrepreneurs in India could think of this concept of Premier Futsal and manage to put together all these Futsal players and of course, all these legends who I have grow up playing with,” added Giggs.

The other marquee signings in the event are Crespo (Kolkata), Falcao (Chennai) and Salgado (Kochi).

Tickets for the event are up for grabs on the Premier Futsal website.

It is just the instigation, the days are not far when children, in India, will arrange for futsal tournaments on the streets, under the lights, and cricket bats will rest in their lockers.