From July to August, three consecutive events across the globe pride themselves on screening Indian films exclusively to their city audiences. They are the London Indian Film Festival (LIFF), the Indian Film Festival Stuttgart in Germany and the Indian Film Festival of Melbourne, Australia. Each one has a distinct profile, and what is of note, particularly so in their funding. Theirs is an uphill task with huge international film festivals that take precedence and dominate. The effort is paying off with every year.

The Indian film festivals are small in size, some 50 films at most that include features, shorts and documentaries, spread over five to seven days over a weekend. They emphasise their Indianness in their decor, mood, and Bollywood dance parties. Their biggest challenge is to find the resources to raise their standards and get sponsors for their airfares, hotels, receptions and talks and here India’s megastars are the magnet. The screenings are intense, specially the question and answer session at the end.

The London Indian Festival (LIFF, July 14 to 24) is growing rapidly, currently held in eleven venues around London and two venues in Birmingham. It was started seven years ago by the intrepid Cary Sawhney, part Indian and settled in London. Now a short filmmaker himself, he has a strong film background in programming and film research nurtured by the British Film Institute (BFI), a strong ally till today in his efforts. He is also the Asian film programmer for the huge BFI London Film Festival. In a short span of time, Cary has made his Indian film festival the largest of its kind in Europe with professionalism, status and style attached.

What impresses is that in London, it is the artistically inclined Indian community that generously supports this festival. Its title sponsor is the Bagri Foundation led by the enthusiastic and indefatigable Ms Alka Nagri, visible at every turn, often conducting its sessions. The Bagri Foundation is a UK registered charity established in 1990, set up to provide philanthropic assistance through education, relief-work, the advancement of health and the preservation of Asia’s cultural heritage. Then there is Tony Matharu, valued patron of the festival, who provides his magnificent, centrally located Grange Hotels for invited guests. 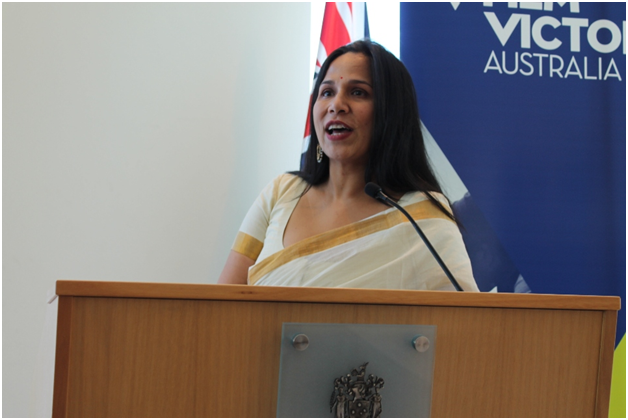 Another leading sponsor is Pure Heaven (Sun Mark Ltd) whose CEO, Harmeet 'Sunny' Ahuj, this year presented the ICON Award to guest speaker Sharmila Tagore and new patron, Shekhar Kapur. From the city itself, BFI gives its grant funding and takes the festival online while Cineworld Cinemas have been supporters from year one. With the experienced Cary Sawhney and scriptwriter-journalist Naman Ramachandran at his side, the festival has expanded its programming horizons admirably.

This year LIFF presented films in 15 languages from not only India, but also neighbouring Pakistan, Bangladesh, Nepal and Sri Lanka. Its theme being a special focus on women and cinema, it presented seven films by women directors. LIFF’s prized Audience award went to Pakistan’s Sharmeen Obaid-Chinoy and Andy Schocken’s ‘Songs of Lahore’, an ode to this beautiful city’s Sachal orchestra. Its second, the Satyajit Ray Short Film Award, managed by the third key honcho at LIFF, Satwant Gill, went to ‘The Cobbler’ by Saqib Pandor. It carries a £1,000 cash prize.

In sharp contrast, the Indian Film Festival Stuttgart (July 20 to 24), now in its 13th year, is an intimate and close festival within a short walking distance from its one festival hotel, to its one charming old world theatre, the Metropole, which is surrounded by little wayside restaurants. The ambience invites camaraderie, friendship and relaxation even with buzz film activity all around. The amazing factor here is that this festival has only one main sponsor in the person of the affable, energetic entrepreneur extraordinary, Mr Andreas Lapp, who has strong ties with India. He is India’s Honorary Consul in Stuttgart and his huge worldwide business interests have a strong base in Bangalore. Importantly, the city of Stuttgart and Mumbai have a twinning agreement since March 1968, making them ‘sister cities’. They are committed to mutually promoting friendly contacts, respect, understanding and lasting friendship between the inhabitants of the two cities.

Stuttgart, under director Oliver Mahn and his caring team, has over the years introduced Indian films, specially its regional cinema, to local audiences. An astonishing number of leading filmmakers have presented their films here and loved returning just because they valued its serenity. Here, one must mention a festival’s favourite – Tannishtha Chatterjee. The festival offers four awards. The German Star of India for the Best Feature Film (and 4,000 euros attached) which this year went to the acclaimed Kannada debut film ‘Thithi’; directed by Raam Reddy; Best Short film (€1,000) to Payal Sethi’s ‘Leeches’; Best Documentary (€1,000) Pankaj Johar’s ‘Cecelia’; Director’s Vision Award (Euroes 1,000) to exceptional social or political commitment in a film (Leena Yadav’s ‘Parched’); and Audience Award (€1,000) to Pan Nalin’s ‘Angry Indian Goddesses’ (do these crowned beauties have cause to be angry anymore?).

Down under, where our summer is their winter, an Indian festival takes place that is again completely different, held mid August, India’s Independence Day being a key celebratory part of it. The Indian Film Festival of Melbourne (August 11 to 21) is run by the gracious, charming, tireless Mitu Lange Bhowmik. It has Bollywood greats abounding but also presents an array of India’s independent regional cinema.

What sets this festival apart is how it manages to draw mega stars (present this year was Rishi Kapoor with his wife Nitu, Malaika Arora Khan, Simi Greywal, Anurag Kashyap, Richa Chaddha Srijit Mukhetjee, Rituparna Sengupta, Radhika Apte and directors Leena Gupta and Shakun Batra). Besides, Vidya Balan is front lined as the festival’s Ambassador. So, the tone of the festival is show biz at its essence, from super stars to new talent and regional language films. It is here that Leena Yadav culminated her year long run of accolades for her stunning film, ‘Parched’. The film won both, Best Film and Best Director – a rare honour.

But, wait. The unique and outstanding factor of this Melbourne event is that it is supported almost entirely by the top echelons of the local State of Victoria (Melbourne is its capital, declared quite rightly as the world’s most wonderful city to live in). It is their representatives, leading Ministers in the field of entertainment, such as Minister Martin Foley, Minister of Creative Industries and Gavin Jennings, Special Minister for State, who are on stage at the festival’s key events, its opening Press Conference and the Gala Awards night. It is the State government that provides the funding to this Indian film festival, lauding its multi-cultural bonding. It was an honour indeed when the Governor, the Honourable Linda Dessau, threw a stately luncheon in her spacious government house for the festival’s invitees from India. The link between this festival and local State support is uplifting for both its organisers and their Indian guests.

So there we are, the same three coins in three different pool of countries, each with its own individuality and so differently funded, staging the various cinemas of India to a world audience.

Dining with the Nawabs 6 hours ago