The 41st Toronto film festival started on a pitched note of expectation with a highly touted film, a remake of the 1960 Western classic of the same name, directed by John Sturges and a memory-etched cast led by Yul Brynner, Steve McQueen, Charles Bronson and Eli Wallach. And that film itself in its time was based on the 1954 film classic ‘Seven Samurai’, directed by the Japanese master, Akira Kurosawa.

Considered to be one of the most thrilling movie epics of all time, ‘Seven Samurai’ is set in a 16th sixteenth-century Japanese village whose desperate inhabitants hire warriors to protect them from invading bandits. The film combines justice being delivered by hired killers with elements of fine human emotion and relentless violent action. This kind of layered philosophy lies also at the basis of the American Western, and Sturges adapted it in his film with seamless expertise. His 1960 version takes the essence of the film to a small farming village in Mexico and gives the story a rich American small-town flavour.

This new reinvention of this classic theme is directed by Antoine Fuqua, who cast the same two highly regarded lead actors, Denzel Washington and Ethan Hawke, in his earlier blockbuster, ‘Training Day” (2001). And sure enough, it is even more high-octane and blistering in this modern day setting. The film releases in the US on September 23rd. 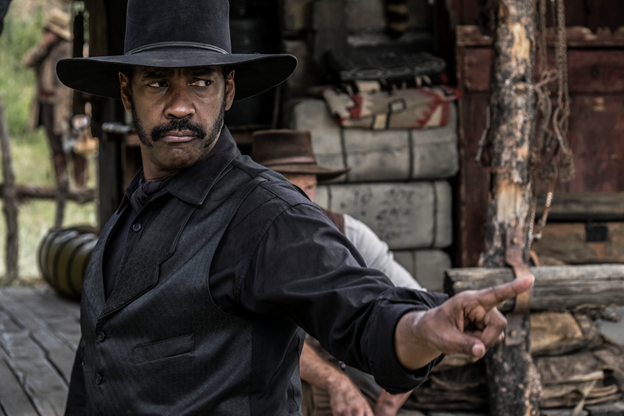 In his film, it is the small mining town of Rose Creek in Minnesota, which is under the deadly control of industrialist Bartholomew Bogue (Peter Sarsgaard). The frightened locals hire seven disparate, lonely men who are outlaws, bounty hunters, gamblers and hired guns. As they prepare the town for the violent showdown that they know is coming, the seven mercenaries led by Sam Chisolm (Denzel Washington) each of whom come to this rescue operation for a personal reason. They then prepare the town to repulse an army of over 100 bandits who will arrive wanting food.

TIFF’s opening film sets the tone for its impressive list of hyped, big-time Hollywood and other blockbusters. World distributors, the media and the audience follow these films with flint-eyed eagerness, knowing that they are the harbingers of the coming Oscar nominees and awards. These films are set to do big box office business as well. The film ‘Martian’ proved this with panache last year. In the same vein, TIFF premieres/audience award winners in the past have included Ben Affleck’s ‘Argo’, Danny Boyle’s ‘Slumdog Millionaire’, Tom Hooper’s ‘The King's Speech’ and David O’Russell’s ‘Silver Linings Playbook’.

As eagerly awaited are TIFF’s choice pickings from leading festivals of the year starting with Sundance and Cannes. This year the best of other festivals at TIFF are titles such as Nate Parker’s ‘The Birth of a Nation’, Jeff Nichol’s ‘Loving’ and Jim Jarmush’s ‘Paterson’.

Balancing this glittering line-up of the most enticing and popular films of the year, TIFF offers for the more demandingly inclined viewer, films that are by first time directors, films of issues and causes that need more focus in our times, documentaries and shorts, and this year, an added dimension, Virtual Reality. The coming ten days hold promise for all.

Watch the trailer of ‘The Magnificent Seven’ on www.youtube.com