Before It All Changes: Pesos, Buses, (No)Beef And Ballads in Cuba

HAVANA: Sitting on a sunken cushion seat in this timeworn camion that goes from one end of Cuba to the other, I stretch my neck out to take in the air I had always dreamed of. I stare out of the window and a Caribbean-clear sky stares back at me, the stars here shine red and bright, the palm trees stand tall. This is an old tempo, where the carrier space is closed up with a hard tarp or metal sheets. These camions are what are called guajaloteras, chiveras or ganaderas, as they were previously used to transport animals: turkeys, goats and cows.

I am visiting Cuba in the moment where the rest of the world says is the time “before it all changes” because Castro and the White House are coming to an agreement. I have spent the last two years living in Mexico, on a Masters’ scholarship, in the state of Veracruz which I always describe as Cuba with Walmart. Cuba is right across the bay, yet I am not travelling there to take it all in as an exotic experience, but instead to understand some fundamental questions such as “what are the values of a place living in resistance? “and “what is life like in one of the few socialist countries?”

We took the bus around sun-set, this time of year being that of carnival and holiday full is popular for local travellers, or at least those who can afford it. A regular wage in Cuba would be around Rs. 1000 per month, a ticket in this camion costs around Rs. 600 and one could throw in another Rs. 100 for some Camaguey Pizza baked in a flat pan and a can of Bucanero beer along the fifteen hour journey.

There is a cheaper travel option, the guaguas (newer buses) or the train that cost around Rs. 300, but bookings on those have to be done days in advance and the seats are exclusively reserved for locals or students, one needs to demonstrate identity proof, whereas on the camions, foreigners are permitted provided we pay a few Cuban convertible pesos more.

The third travel option is a fancy tourist bus that costs around 60$ per seat called Via Azul, or if even that is not enough there are planes that fly between locations priced around 100-150$.

Money is an important part of understanding Cuban resistance. Other than differential pricing for locals and foreigners, common in many countries, over here there are actually two currencies created for the two categories. The Cubans use a Cuban peso, roughly around 30 paise, where one could buy a coffee for 1 peso and a full filling meal for 24 pesos. Foreigners, on the other hand, upon arriving in Cuba are expected to exchange their currencies for Cuban Convertibles (CUCs) that is roughly equal to a dollar. Tourist places and spaces, especially the route that Via Azul and the flights take, are lined with shops, eateries and bars that accept only CUCs. This is one way in which Cuba manages to bring in tourist money to fuel itself, and not allow foreigners, especially dollar and euro bearers to exploitatively walk around due to their wealth while the Cubans fight out a battered, boycotted and blockaded economy.

The blockade has shutdown Cuba from any flow of goods, one could argue a good thing, yet extremely hard-hitting in terms of everyday reality. Over here the only allies are the Venezuelans and one commonly sees Chavez face drawn up on posters. The Cuban rural-scape is farmed by families who due to an agricultural reform have land to cultivate, run their own cooperatives although these, like almost everything, are owned by the state.

While organic agriculture is a trend in other places, in Cuba it became a strategic decision. In the initial years after the blockade, Cuba continued to grow a monocrop of sugarcane that required intensive pesticide and fertilizer use. Cuba especially during the years of colonization focussed so much on growing sugar that very little was done to grow much else. However, in the so called special period or after the fall of the Soviet Union, a new strategy had to be taken in order to support the food necessities of all its people during a period of intense cutting off of Cuban people from the rest of the world. This was organic mixed-cropping agriculture and now Cuban families have access to non-toxic healthy local vegetables at different times of the year.

At the same time, on the island one does not have access to a lot of exotic foods: at a lunch time one would have the option of black beans and rice with pork or chicken, or tomato gravies (fricasé) pork, mutton or chicken, some vegetables, a lot of fruits and tubers like yuca and sweet potato. Although the options may seem limited for an Indian palate we must remember that on the island most of what you eat is doing no harm to your system. Also, one could get up any kind of health treatment, even the highest technology heart surgery, without paying a paisa as healthcare is universal and free. A place like this makes one question whether in the free world, is one actually free? The lie of freedom has been told again and again, to convince societies that they are living a good life, without ever living well.

Although access to good healthy staples and vegetables is possible, one confusing detail remains the meat and access to meat. Now meat-politics for someone living in India are far from uncommon. But Cuba, or any Latin American meat-gorging country is the last place one expects to come across such politics.

It is shocking that in Cuba to kill a goat, chicken or pig is acceptable and fairly common, but much like in our own country although for other reasons, to eat beef is a larger crime than to kill someone. One can be sentenced to prison for several years for killing a cow, whereas robbery or murder has lesser charges. A kilo of beef can cost more than triple a Cuban monthly wage, therefore emerges the rumour claim that it is exclusively kept for the governing class to eat. However, the reality is deeper than that, and once again has to do with the blockade and Cuba’s struggle to move towards diverse cropping and animal husbandry practices from the earlier practice of only growing sugarcane.

At present there is a general feeling in the world that the blockade is soon to be lifted meaning that there will soon be a free market in Cuba that will be flooded with foreign goods and nothing will ever be the same.

However, a walk closer to resistant and resilient systems in Cuba that show that through these isolated days, makes it seem unlikely that all of this would be given up for an open invitation to capitalism. Campesino a campesino or farmer to farmer was a method used where farmers taught each other how to farm without destroying their lands during the blockade, this has created huge networks and ties that are unlikely to be compromised so easily. “We the Cubans will not give up so easily”, my Cuban grandfather sang to me, as we ate icecream together one evening and proudly sang this verse to me.

When I had money, they called me Don tomas
Now that I don’t have any, they simply call me tomas

Collective history becomes active memory when it is lived every day, not tucked away in a text book, but is constantly making connections in the social and personal scape of people’s lives. In Cuba, one cannot escape, although there are many people who flee on rafts to nearby Miami and some to the Mexican side, yet for those who remain on the island, all that the people have are each other. One cannot go through a day without being in constant interaction with the taxi driver, the toilet cleaner, the cafeteria cook, the sweeper, the ration shop worker and many more.

There are no gated societies, no private internet connections, few private cars, hardly many private businesses and in this sense one has to depend on the state, yes, but also other people in order to go about ones lives. This can be extremely frustrating, as things work at a slow pace many times, yet at the same time because of being in constant interaction, people are always negotiating their present lives. It may appear in Cuba that everything is old, and that we are living in the past, but possibly it is one of the few places where people are interacting and actively creating a present.

In a small jam session at Santiago, a young boy steps up to join the elder ladies singing. The famous musicians of some of the big groups like Los Jubilados del Caribe are present, jamming with everyone else. An afternoon singing session becomes a party, people stand around dancing, listening, drinking, talking.

If there is one indicator of a healthy society, it would be a place where you could have parties with people of all ages, all backgrounds without an exclusive fee for entering the party, or rules as to how to dress behave, and more so where everyone is welcome. We spend most of the night at the port side where everyone has gathered to watch the carnival and take in the evening air. Young and very young couples walk up and down, in and around.

Looking down the main carnival road once again with the party in full swing, each barrio has made a float to represent their neighborhood. The float that is off centre-stage catches my eye. It is called the earthquake, and it consists of the fattest-heaviest people, women, men and transgender on the island, dressed up in carnival-style, dancing their way through carnival. The audience is enthralled, the judges give them high scores, and the space around is vibrating.

It is my last night here and this is exactly the feeling such a place gives out, it is a vibration of a deeply grounded sense in a world that is now airy, divided and out of balance. 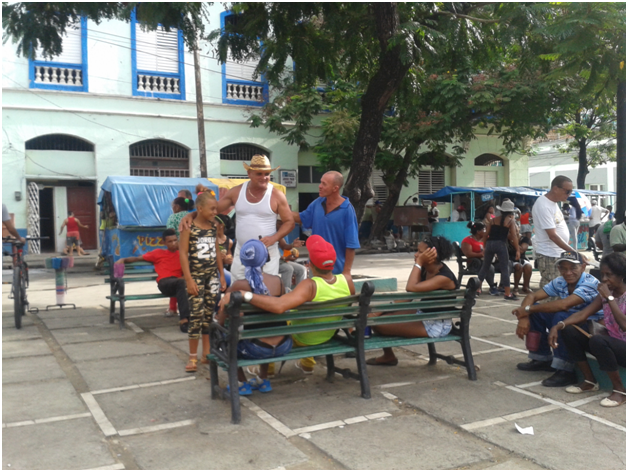 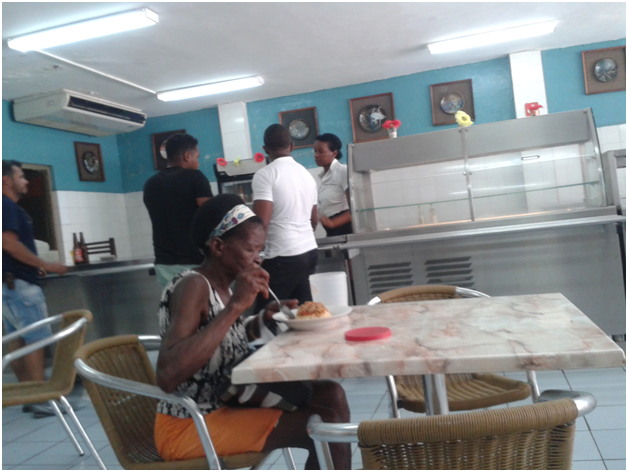 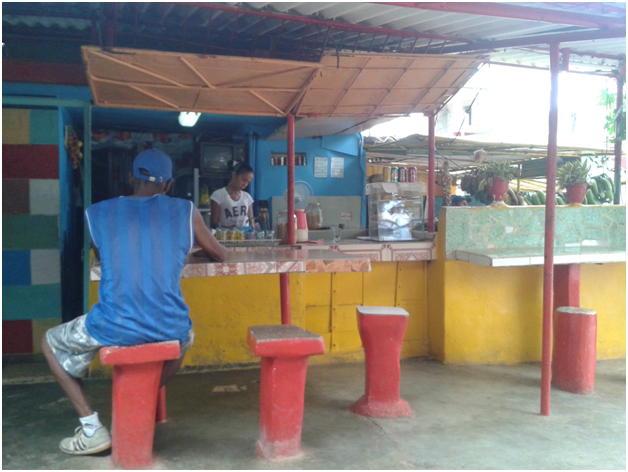