The Momo Men Of Delhi

NEW DELHI: The funky hairstyle of Suraj tells a lot about his choices and priorities of his teenage life. His little momo stall on the road leading to the arts faculty in North campus, Delhi University attracts mostly students. Hailing from Mahendranagar district of Nepal, Suraj has spend around 14 years in Delhi, first dropping out of school in Class 9, and then working in restaurants as a helper, chopping vegetables and doing the odd jobs.

Suraj now has his own stall for the last four months and manages to save around Rs 1000 per day. Still the amount of time and labour it takes makes him a little bored.

When asked why he chose Delhi over Kathmandu he has a logical answer: the currency difference of the two nations; that is whatever you will earn in India will have almost double value in Nepal. (It has to be kept in mind that the Indian value of one hundred Nepali rupees falls around 60 rupees.) Suraj, like thousands of other Nepalese, dreams of a foreign job in countries like Malaysia or Saudi Arabia and for him this stall is just a stepping stone into the big wide world. 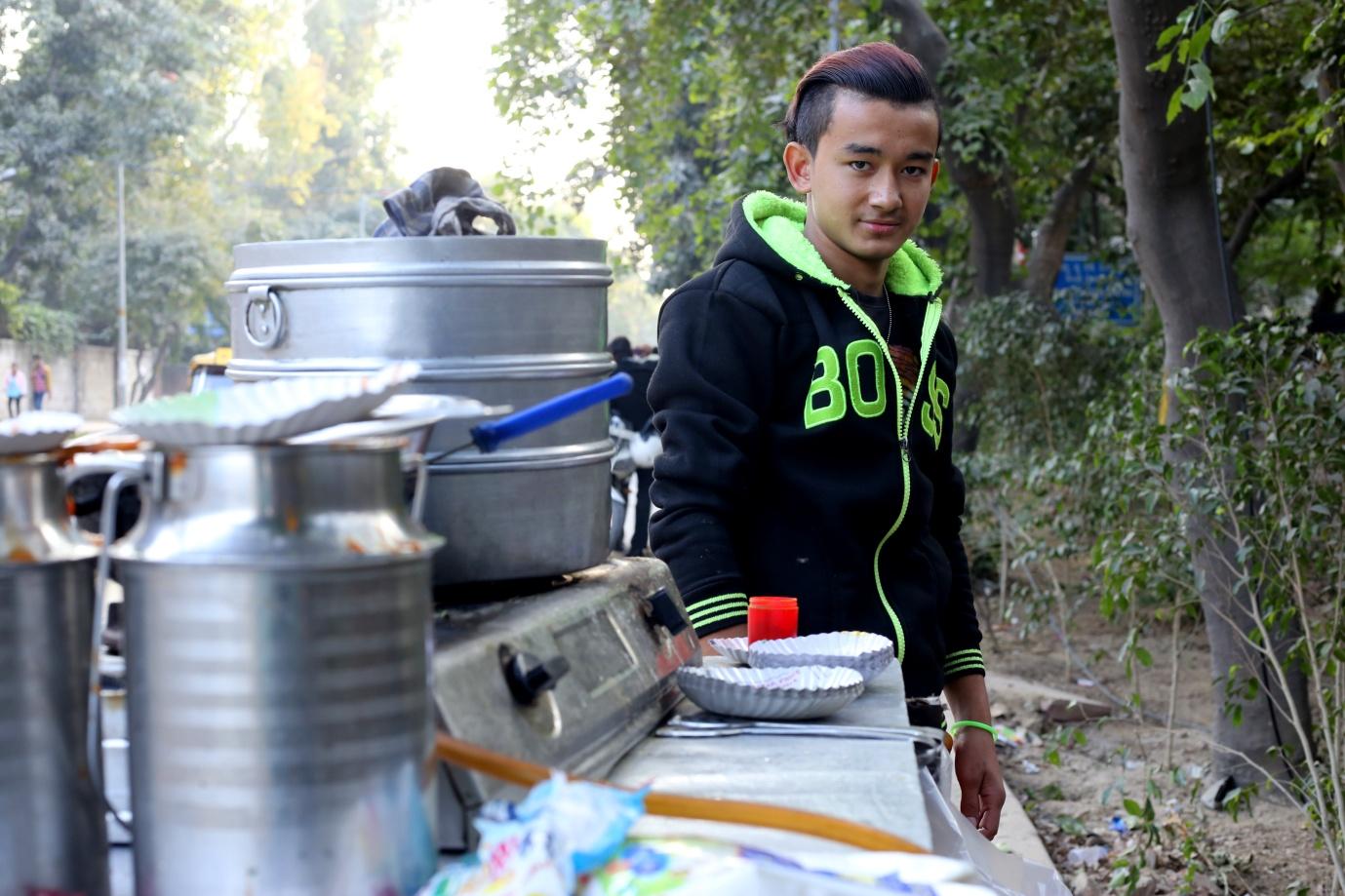 Devi Ram, 52, runs another momo cum chowmein stall right in front of the Babu Market, only a few metres away from the entrance of Sarojini Nagar market. He is basically from Dang district of Nepal but residing in Delhi for decades now. His stall is around 8 years old. He had a hotel in Friends Colony area prior to this momo stall. His momo job is more like a family business as it involves all his three children and wife. Now he plans to move on to start his own momo company, where he will be producing momos for other street vendors. 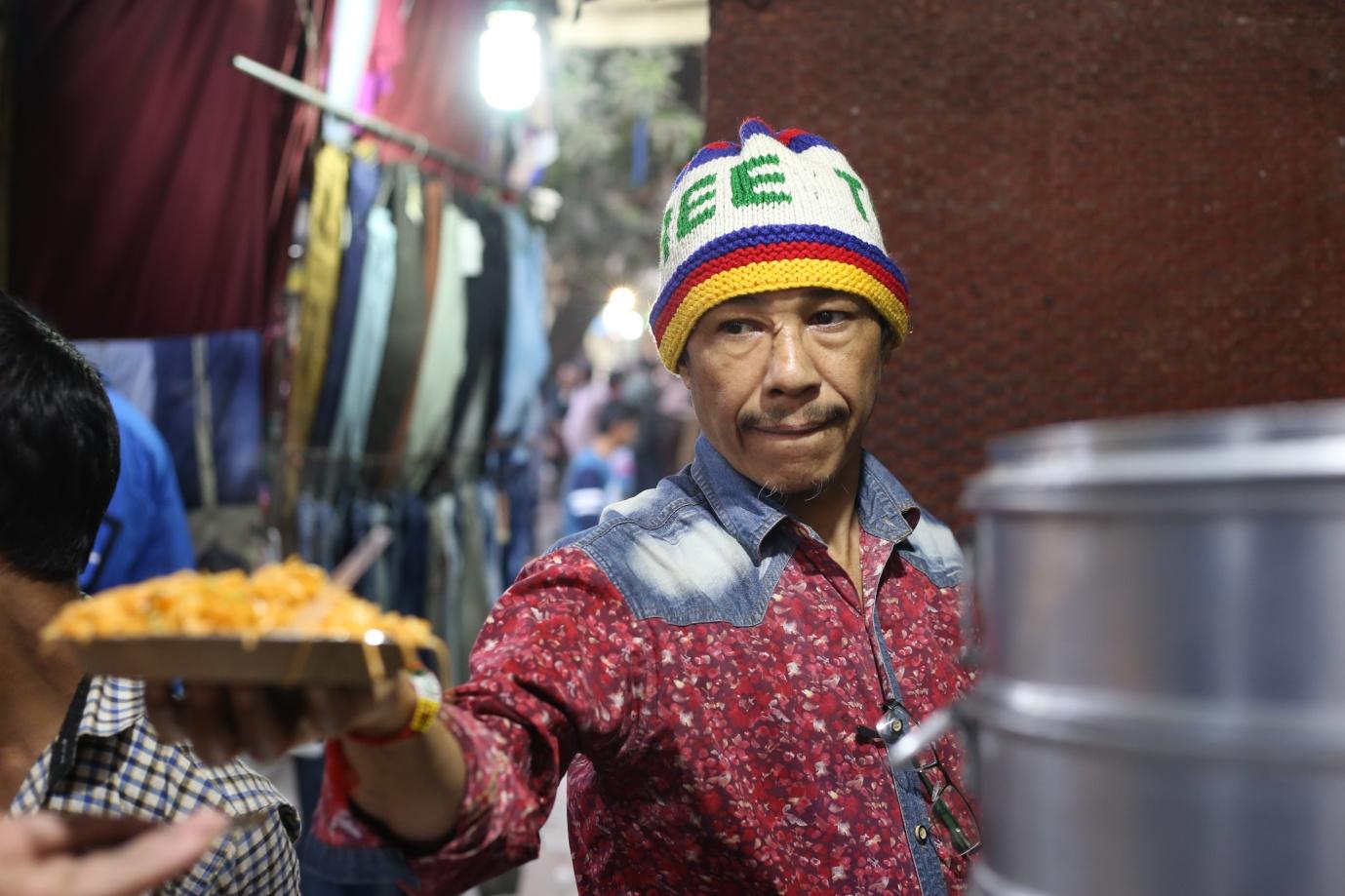 Interestingly, Devi Ram has never been to Kathmandu. Clueless about the future, he says that he had to win over the police and the local authorities for the little space his shop acquires in this thriving market. NDMC men come hunting for illegal shops every now and again, and seize their assets. 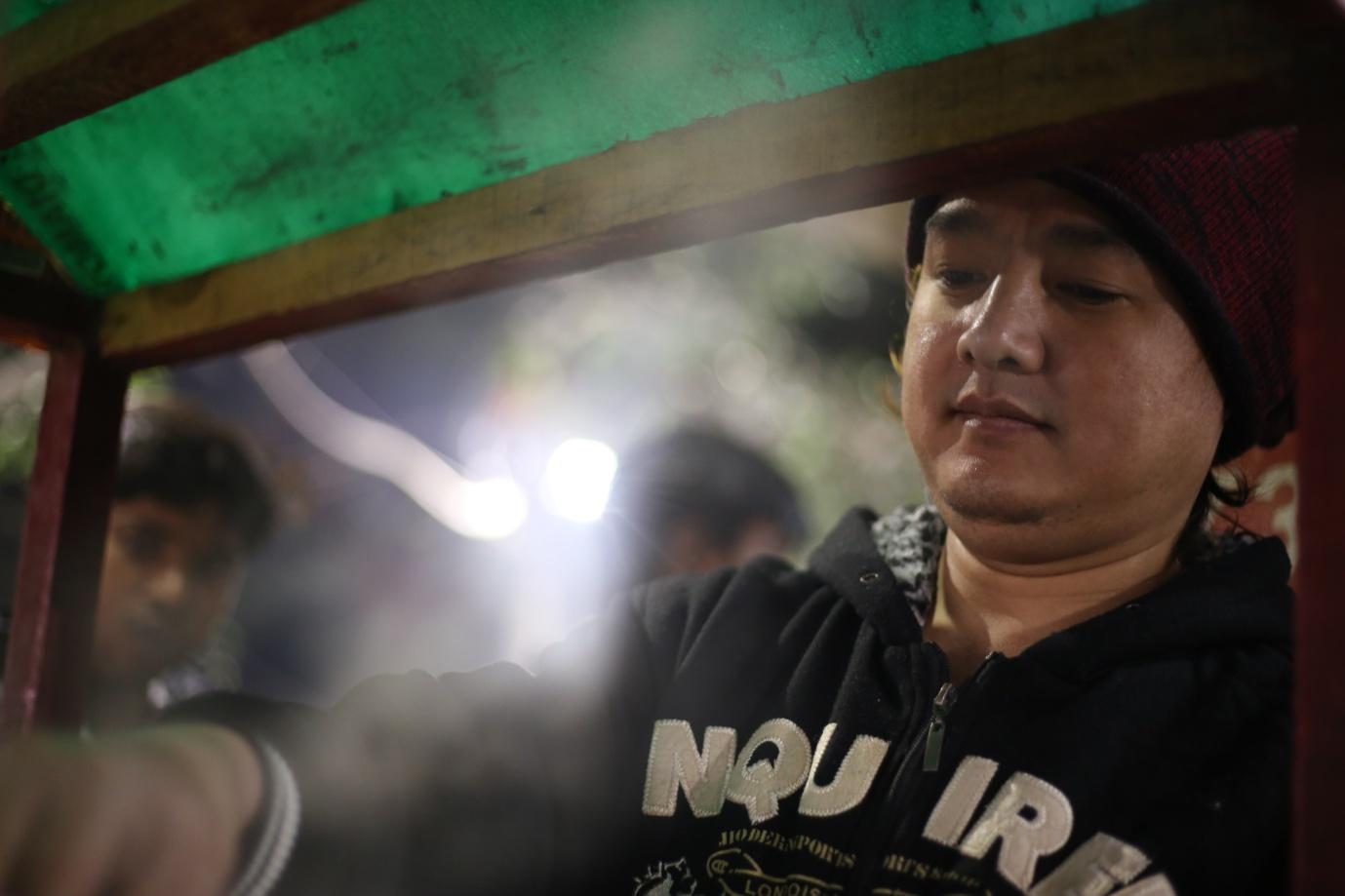 Darjeeling is famous for its tea. But now the Indian capital secretly knows that its street food is noticeably tasteless without the touch of magical hands from Darjeeling. Any momo lover who has an appetite for quality momos knows of Suraj’s stall in Munirka Market. Suraj, 32, landed in Delhi from Darjeeling in the year 2004 and served in a reputed tourist hotel for around 8 years. Then due to domestic reasons he had to discontinue his job which was very demanding in terms of time and labour. Now he lives in Munirka with his wife and a five year old son. 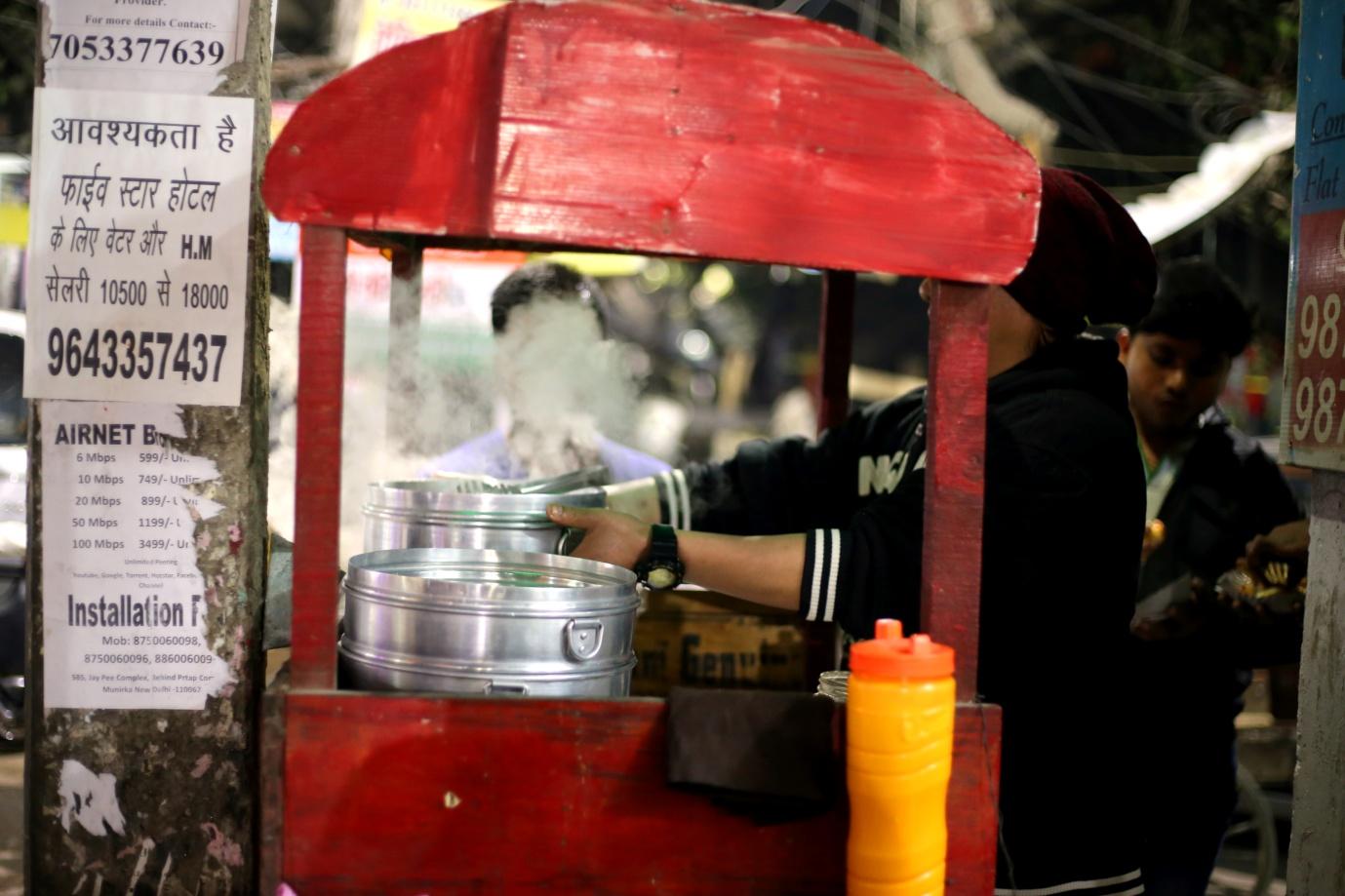 Suraj prepares momos with the help of his wife and a relative and a part time help.He runs his stall himself and accepts that he can’t hire a local boy for the stall as momo-business is as about taste as it is about the man behind the stall. He takes his business as a part time job as he is not very sure about the future of the momo business. 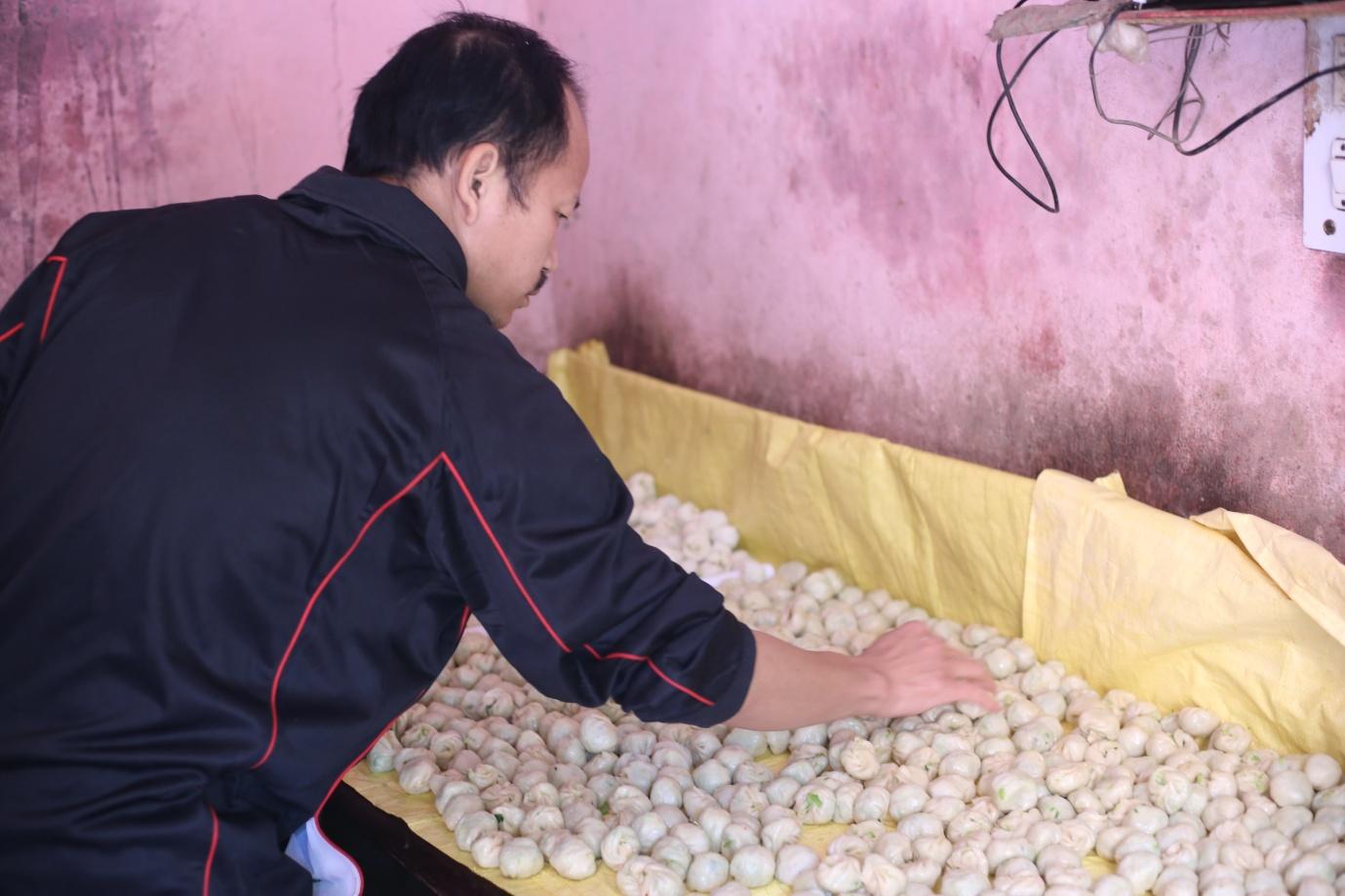 A locality in Chiraag village in Delhi is known as the Momo Village. This has a good population of Nepalese devoted only to the manufacturing of momos. They usually don’t set up stalls in the streets like others but only make momos on orders from street vendors. Hemraj, 43, is one such person from Nepal’s Dhankuta district. With his little daughter Deepshikha playing around, Hemraj is busy preparing momos along with his son, a brother and a brother-in-law in his spaceless, uncomfortable rented shop. 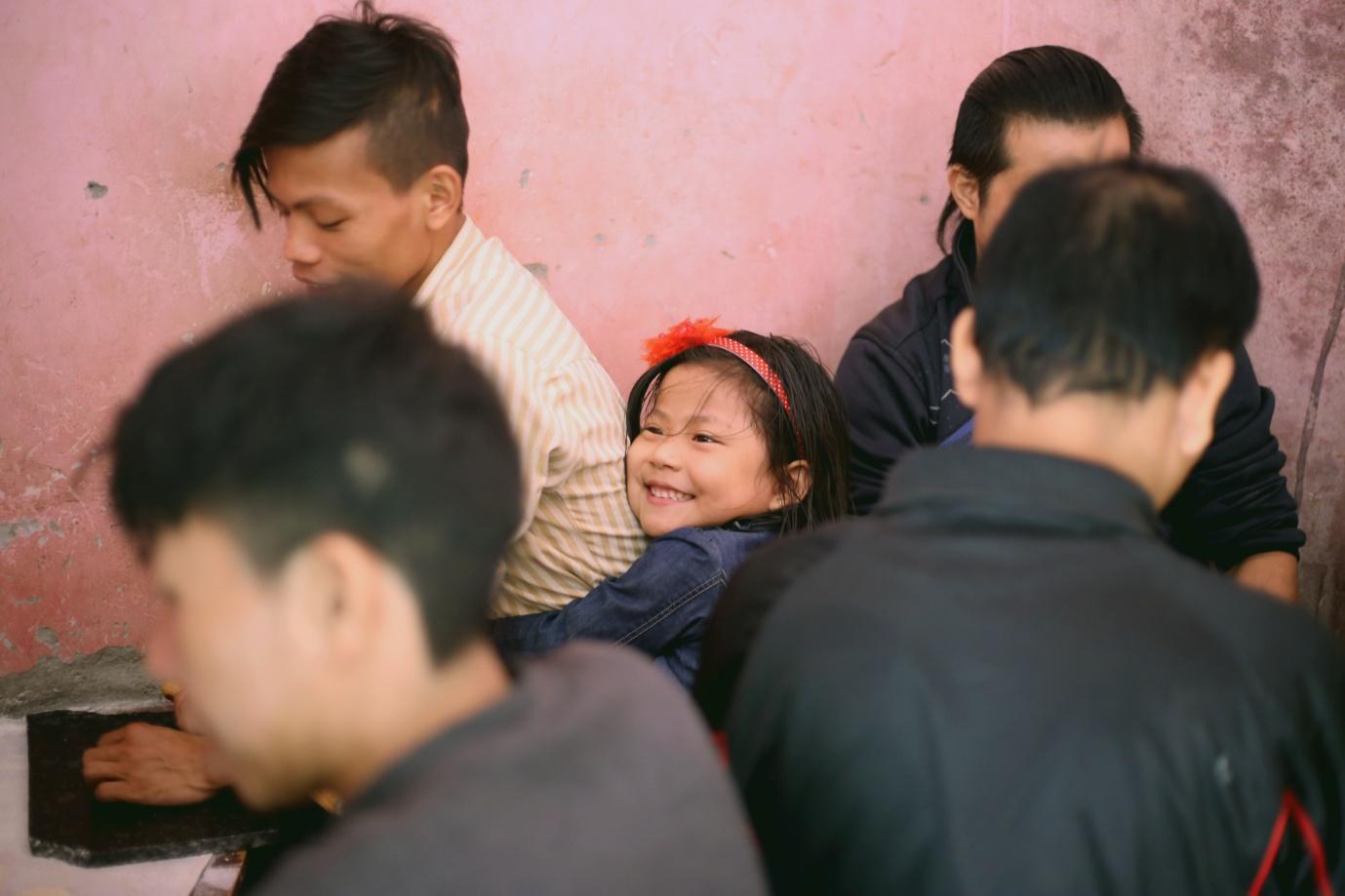 He has to prepare around 3000 momos by 2 pm. That is his everyday routine. He starts his job around 7am with a deadline of 2pm. It includes doughing maida, preparing masala, rolling and stuffing, oiling the stuffed momos, half-steaming them and finally drying the half-steamed momos. His daughter Deepshikha goes to a nearby private school. Deepshikha’s mother works as a maid. 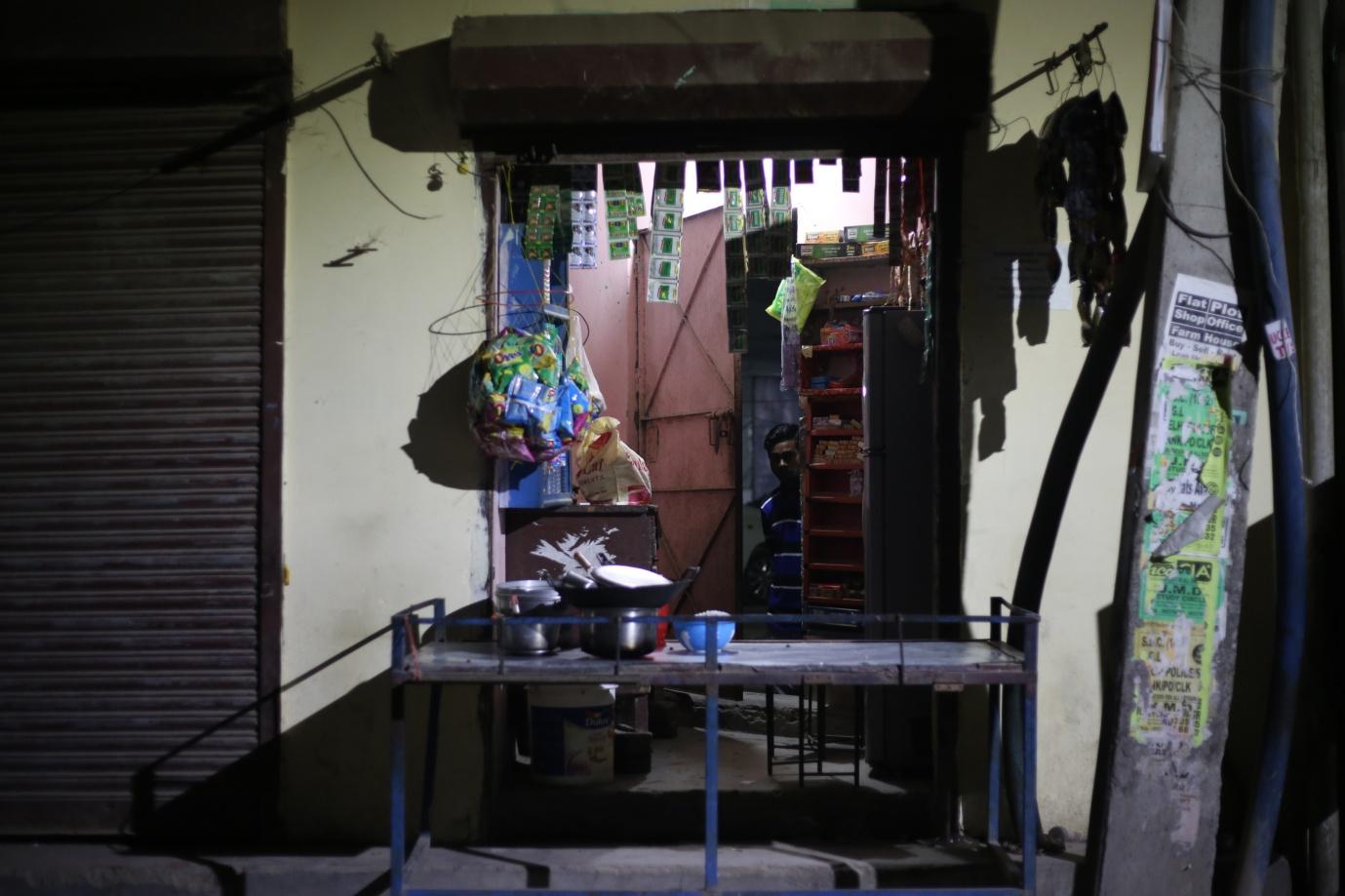 And then there are people who are neither from the North East nor from Nepal but still trying to get a foothold in this business. Monu, a resident of U.P., runs a small tea-biscuit shop in Maidangarhi area in Chattarpur. The little extension in front of his shop reflects a desire to earn, with his momo-chowmein business now an add on to his tea. He does not earn much, selling just 10 plates of momos on an exceptionally good day. But he believes this is because his shop is away from the main market. He does not know how to make momos though, his sister is the chef!