Women In The Films of Bimal Roy

A few days ago, a section of Mount Mary Road in Bandra, a Mumbai suburb, was renamed Bimal Roy Path with a plaque as a tribute to the memory and contribution of one of the greatest filmmakers of Indian cinema. He was a man who believed in his work, was low-profile to a fault and as everyone who knew him, was a man of really very few words. It would be in place to take a brief look at women in some of the films of this great magician of Black-and-White of Indian cinema.

The women in Bimal Roy's films had an identity of their own. Their stature was unimpeachable. They were emotionally 'independent'. They were not mere foils to the men or to the other characters in the film. They created a niche for themselves.

Do Bigha Zamin (1953) portrays Nirupa Roy as Paro, a peasant wife. She is left behind to cope with her small family of a small son and a sick father-in-law when her husband leaves for the city. She is realistic and credible in her naiveté and her earthiness. She takes her husband's letters to an educated lady (Meena Kumari in a guest role) to be read out to her. When the woman reads these letters, Nirupa smiles like a coy bride. She keeps count of the days her husband has been away by making chalk marks on the wall, displaying the natural anxiety of an unlettered peasant wife. In the city, she demonstrates her gullibility to be conned into an attempted rape by Tiwari. While escaping from his clutches, she is run over by a car and lands in hospital. Though totally dependent on her husband, she has a mind of her own. 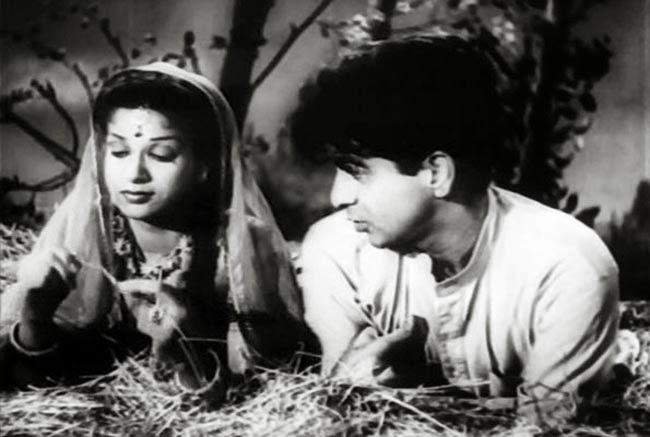 Bimal Roy’s minute detailing of interiors, scenes and characters is incredible in Biraj Bahu. In one scene, Biraj’s younger sister-in-law (Shakuntala) comes to the fencing that divides the sections in which the two brothers live and apologetically requests Biraj to accept a little help from her because Biraj is facing severe financial crisis. This is a moving touch that shows the bonding between the two women. Or, that small scene showing Biraj trying to cook some gruel for herself on a makeshift oven under a tree and a passer-by handing her alms taking her to be a beggar is a blend of shock and pain. It is emotionally hurting to see her accept the alms but this is what could happen in real life.

Kamini Kaushal as Biraj won the Filmfare Award for Best Actress for Biraj Bahu in 1955. Her performance, with its low-key smiles, anger, hurt, humiliation and shock, come across beautifully. The scene where she looks into the mirror, is shocked to find all her beauty gone and says, “accha hi hua” is touching. The other moving moment, albeit a bit overdone, is when the younger brother destroys the fencing between the two homes in remorse when Biraj fails to return.

“How many times have you read Biraj Bahu?” Roy had asked Kamini Kaushal before shooting for Biraj Bahu began. “‘I read it twice,’ I told him. He wanted me to read it twenty times. I did. When shooting began, I was so completely in harmony with the period, the characters and the ambience that I didn’t even feel I was acting. I understood why he had asked me to read the original novel in translation 20 times,” reminisces Kamini Kaushal in the documentary, Remembering Bimal Roy.

Madhumati is the biggest box office hit in his career. This film forms one of the most unique triumvirates of cinema talents in the history of Indian cinema. The script was penned by Ritwik Ghatak, the beautiful musical compositions were by Salil Choudhury, and the film was produced and directed by Bimal Roy. Madhumati evokes an aura of romance that has disappeared from the Indian mainstream.

Vyjayantimala in the title role, dances away against the backdrop of the hilly landscape, her ethereal beauty immortalized in Black-and-White, her performance first, as the love-struck hilly maiden, and then, as the ghost who comes back to invite her lover to a union beyond death, matches the delicate nuances of Dilip Kumar as her city-bred lover. In her double role as the city girl who is asked to play Madhumati's ghost, Vyjayantimala changes her body language, her style of emoting and delivering her lines, and above all, her interaction with the hero who is just an acquaintance asking her to help. 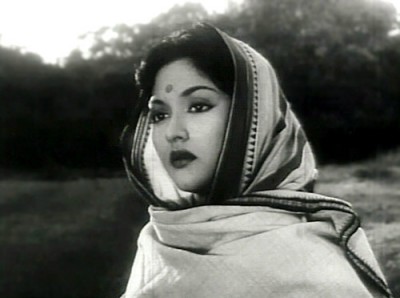 Devdas has two principal woman characters. Parvati, Devdas's childhood sweetheart who he cannot marry and for whose love he meets with a tragic death, has two dimensions to her growth. As a teenager, she is her childish, innocent self, a sweet girl prancing about in the woods with the boy she falls in love with. When she gets married to a much older man, a zamindar who has grownup children from a previous marriage, Parvati has compromised with her new responsibility as wife-and-mother within a new family. Devdas is part of a sweet memory, which she begins to relive with shock, as she discovers the ruined figure of a dying Devdas on her doorstep in the climax. The latter part of Parvati's character, the mature, mellow responsible and understanding wife, is stronger and more memorable than the former one. Parvati throws caution to the winds and breaks down completely the minute she hears that the dead man at her door is none other than her own Devdas.

Chandramukhi, the professional singing girl, falls in love with Devdas and is so influenced by his aloofness and his attitude and his complete devotion to the memories of Parvati that she gives up her profession for good, aware that her love will never be reciprocated. She slowly and surely metamorphoses from a woman of so-called easy virtue to a woman of quiet dignity, presented with more richness than it was in the novel. Vyjayantimala was nominated for the Best Supporting Actress of the Year by Filmfare for her performance. But she turned down the award on grounds that it was not a 'supporting' role. 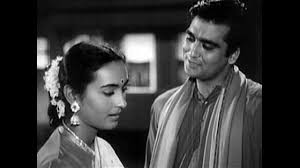 Through Sujata, Bimal Roy gives the women a voice they can call their own, not only through the soft characterization of Sujata, who is almost like a painting done in water colours, subdued, feminine and diffident, yet grateful to her adoptive parents without knowing the truth of her status, but also through the other female characters in the film. Rama for instance, is diametrically opposite of Sujata. Their upbringing is clearly filled by markers that show the difference. Rama has a good education but the script is completely silent about why Sujata was not allowed to continue her education. If Charu had objections, what was Upen Babu doing? The apparent ‘equality’ is thus shown up to be a façade. Is Sujata really a ‘daughter’ of the house? Or is she a convenient handmaid to help Charu run the household with clock-work precision and silent efficiency?

Sujata’s character is a poignant issue of impersonation. While exploring and trying to negotiate the right ‘match’ for Sujata, it is discovered that she fits neither into the (untouchable) caste she is born into nor into the upper caste she has been imbibed in and adopted by. She is a ‘Brahmin’ among untouchables and an ‘untouchable among Brahmins. She, along with the audience is conscious of her split identity. The fact that Sujata is an untouchable by birth is almost incidental, though it has a crucial importance in the unfolding of the narrative. Sujata’s associations are with Nature and we see her at regular intervals in close proximity and in happy harmony with Nature – watering the plants and flowers in the garden, cinematographed with the upper half of her face seen rising from a cluster of flowers, a chandramallika flower being he only ornament she adorns her hair with, etc.

Nutan, who performed the untouchable girl in Sujata, after some years, did another powerful role in Bandini. Sujata and Bandini marked the filmmaker’s return to realistic imperatives. Sujata, dealing with caste prejudice is more human than most films made on this subject while Bandini is considered by many as his finest work. The film is the story of a woman prisoner charged with murder. Told in flashback from the woman's point of view, the story is narrated so that for most of the time, Kalyani is present within the cinematographic narrative either directly or within the sound ambience of the film, which is also used at times as a strategy to move back into her past.

Bimal Roy used imagery and sound beautifully to convey the changing and sometimes volatile moods of Kalyani. As she is seated in the corner of her gray, grim cell facing the prison's high walls, she can hear the hoofs of the horse pulling the carriage taking away her lover, or that masterful scene in which Nutan murders her lover's wife with the hammering of a welding machine in the background heightening the drama! Bandini was based on Tamasi penned by Jarasandha, who documented the lives of prisoners through fiction.

The girl's uncompromising stance reaches a climax when, instead of marrying the doctor, she runs to nurse her dying lover in his last days. Not once does Roy try to rationalize Kalyani’s act of murder. Yet, in the ultimate analysis, Kalyani is more a tragic victim of sad circumstances than a diabolic killer.

Bandini is Bimal Roy's most complete film in the sense that it has eloquently depicted the 'complete' woman with an appeal that transcends the personal to enter the political, a significance that is more universal than individual. Had Bimal Roy not passed away of lung cancer as early as he did (1966), women on the Indian screen would have probably reached a higher degree of maturity, strength and realism more slowly, steadily and with greater conviction than they have today.