Just back after participating in the Standard Chartered Mumbai Marathon 2017, my batteries are charged and that feeling of exhilaration will keep the spirits high for days to come even in this dull and dreary weather of Delhi.

Though I have been to Mumbai innumerable times and spent a part of my college life there, it was my first experience as a marathoner. I was simply blown away by the spirit of Mumbai and more so by the Mumbaikers. This city never sleeps and is certainly the land of dreams. The people and their attitude make the city different.

The Mumbai Marathonis a yearly event and among the top ten marathons in the world. It is also one of the most popular because of having a cultural mix of the kind the city has and their spirited outlook of life. The sheer ability to ‘never say die’ in the worst of circumstances and to wholeheartedly open your door, window, wallet and heart in situations where you have no idea whom you're helping makes Mumbai different. 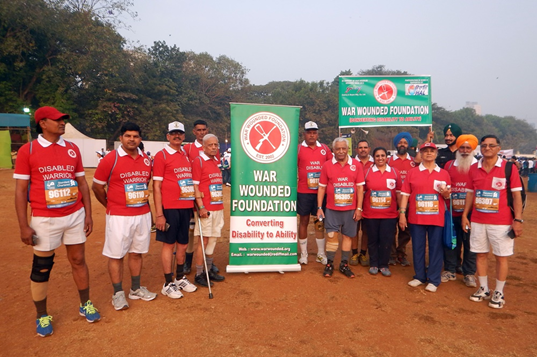 The marathon is an event where people from all walks of life participate including Bollywood celebrities, sports personalities, business tycoons and amateur athletes. People fly in from all over and it is only due to the spirit of Mumbaikars that it turns out to be an amazing event year after year. One has to witness and see and feel the encouragement and support by the locals on this day. Hats off to the helping hand from the city.

I was there to support the War Wounded Foundation team and take part with them in the Dream Run. The Foundation has been set up for the long-term rehabilitation of war-disabled personnel of the defence forces. In my mind they are all indefatigable and invincible... The true spirit of die-hard ‘Faujis’. For the last seven years, they have been participating in the Marathon and slowly but surely the Mumbaikars have started recognizing them.

These are men who have lost their limbs and organs, fighting the enemies of the nation, in different wars that have been imposed by nations inimical to us. There are others who have become disabled in other war like operations, like counter insurgenc operations in different parts of the country.

These are the men, belonging to the Indian Military, who may have lost a leg or an arm or an eye or more than one limb or organ, but whose spirits continue to soar. They run in the marathon so that the people of our country see for themselves that it takes more than the loss of a limb or an organ for the officers and soldiers of the Indian Army and the other two services to lose their spirit!

Although the war disabled President (Lt Gen Vijay Oberoi) and the Vice President (Maj Gen Ian Cardozo) of the Foundation are senior citizens, they also participate in the longer ‘Dream Run’ category, so that the whole group of war disabled personnel participate as one team. For those that don't know: both Generals Oberoi and Cardozo lost a leg each in the war, both rose to be 'Generals' in the Army… Always leading their men from the front.

General Oberoi says it is important that the war wounded personnel become productive citizens by participating in the economic development of the country and in turn being able to supplement their pension, including disability pension that is often embroiled in legal battles due to the lackadaisical attitude of the government. In his own words, “I wanted to provide long-term rehabilitation and financial independence to young lads rather than hand out freebies.”

Being war wounded soldiers themselves; there is no one better than Generals Oberoi and Cardozo to understand the woes of the soldier who is ready to lay down his life for his country without a blink of an eye. There are not many, who after retirement from the services, give back to their organization unselfishly, passionately and unconditionally.

The team this year comprised of the two Generals, Colonels Gulshan and Sanjeev, Mrs. Priscilla Cardozo and I being the two proud ladies supporting the team and the brave hearts that need mentioning:

L/NK Ashok Kumar: belongs to Tigrana village in Haryana. He sustained severe multiple bullet injuries in his left shoulder and left leg due to enemy shelling. He was medically boarded out of service with 75% disability when he was barely 26 years old.

Sub Satbir Singh: of 19 Rajput, belongs to Bhiwani Distt of Haryana. In 2003, while operating against ULFA militant in Manipur, he was grievously injured in an IED blast and exchange of fire with militants. Both his legs got severely injured with ACL tear both knees (nerves damaged) and damage to his right ear. He was boarded out with 100% disability.

Hav Madan Lal: of 18 Punjab, belongs to Hamirpur Distt of Himachal Pradesh. In 1993, he suffered severe injuries due to a grenade attack by militants while patrolling in Kupwara area of J & K. This resulted in damage to his liver. He was medically boarded out with 50 % disability.

Hav Gurdeep Singh: of 27 Punjab, belongs to Balachaur in Punjab. In 1991, he suffered multiple bullet injuries due to militant fire in a search operation against the militants, resulting in severe injuries to his left arm effecting ulnar nerve in Anantnag area of J & K. He was boarded out with 50% disability.

Nk Parupkar Singh: of 26 Punjab, belongs to Fatehgarh Sahib Distt of Punjab. He suffered severe bullet injuries in the right arm in an ambush by Tamil Tigers in Trinkomali area of Srilanka in 1991. He was boarded out with 50 % disability.

Nk Anand Kumar: of 19 Grenadiers, belongs to Bhiwani Distt of Haryana. He suffered severe injuries of his left leg and right eye due to enemy mortar fire while deployed in Pallanwala area of J & K in the year 2000. This resulted in amputation of his left leg below knee and permanent damage to his right eye. He was medically boarded out with 80% disability.

Nk Mahender Singh: of 19 Grenadiers, belongs to Jind Distt of Haryana. In the year 2000, while patrolling on the LOC in Pallanwala area of J & K, suffered severe injuries of left leg in a mine blast resulting in amputation of his left leg below knee. He was medically boarded out with 60% disability.

Hav Jagdish: Corps of Signals, belongs to Rohtak Distt of Haryana. He suffered severe injuries of right leg in a road accident on duty while posted in Babina, MP. He was medically boarded out with 80% disability.

It was heart-warming to see people cheering the War Wounded team, thanking them for serving the nation, saluting them and also stopping by to take photos with the team. A nation that doesn’t forget its soldiers will go a long way!

Having learnt of this NGO, Sonali Mandlik Patil, an army officer’s daughter, started a page on Facebook called, ‘Fauji Kids for War Wounded Foundation India’ in an attempt to start a fundraising effort along with other Fauji kids. She initiated this with a desire to gather all Fauji kids and others in a unified way to give back to all the gallant men and women who are part of the Defence services.

The Mumbai Marathon is not just about running but it is about great triumph, amazing stories, defeating odds and many people, who put everything behind to just run. The spirit of Mumbai on the day of the Marathon was simply electrifying. Just under half a lakh people ran…