LOOK AT WHAT THE BJP LEADERS ARE SAYING ABOUT THE DADRI LYNCHING: DOES THE PM CONCUR?

NEW DELHI: The communal campaign that led to the brutal murder of Mohammad Akhlaq in a village in Dadri, just 35 km from Delhi, has now been followed by an aggressive justification by senior leaders of the Bharatiya Janata Party. Let alone inflammatory statements from the front organisations like the Vishwa Hindu Parishad like Sadhvi Prachi who said, “those who consume beef deserve such actions against them.”

The statements by the BJP from the first hours of the lynching itself make it clear that there is no remorse, and no clamour for justice. Several have spoken in support of those who allegedly led the mobs, and no less a person than the Union Home Minister Rajnath Singh has dismissed the murder as “not communal”, maintaining “it should not be politicised.”

In the midst of the BJP cacophony that does not include a word of support for the poor man who was killed, his son who is struggling for his life, and his family that is terrified and running around for protection, Prime Minister Narendra Modi has maintained a studied silence. Given the fact that his Home Minister has taken a position, can it be presumed that the Prime Minister also shares this view. And that this is the viewpoint of the government of India?

Significantly while the Delhi chief minister Arvind Kejriwal was stopped for hours before being allowed to enter the village, the BJP leaders are facing no such hurdles and have been left free to move in and out of the village, making statements of the Sangeet Som kind with impunity. The CPI(M) has demanded Som’s immediate arrest.

The Citizen has compiled a series of statements by BJP leaders to edify its readers about the position taken on the lynching by the ruling party and dispensation of the country:

The Home Minister, Rajnath Singh, echoed Sharma’s statement that the killing should not be given a “communal colour.” “It was an unfortunate incident. But it is not proper to give communal colour to it,” Singh told reporters. “The incident should not be politicised,” Singh added.

“The case reported from the village was an outcome of anger towards the Akhilesh Yadav government. Police have never taken action in the cases related to cow slaughter. I appeal to the state government to stop atrocities on innocent villagers,” the BJP MLA continued. Hitting out at All India Majlis-e-Ittehadul Muslimeen (AIMIM) leader Asaduddin Owaisi and SP leader Azam Khan, Som threatened, “The visit of people like Owaisi from Hyderabad will disturb law and order. I request Azam Khan and Owaisi to stop making statements on this issue. Otherwise Hindus know how to retaliate.”

“Cases of cow slaughter will be dealt with in the same way like the Hindus did in Bisada” -- Bhoopendra Chaudhary, Hindu Raksha Dal President

Bhoopendra Chaudhary, President of the right-wing Hindu Raksha Dal too met with the families of the accused, condoning the brutal murder with the statement, “Hindus will not tolerate attacks on our mother cow.” “The cases of cow slaughter will be dealt with in the same way like the Hindus did in Bisada,” Chaudhary said.

“The (victim’s) family is in the wrong” -- Nawab Singh Nagar, former BJP legislator from Dadri

A former legislator from Dadri Nawab Singh Nagar spoke in the same aggressive vein maintaining that the family was at fault. “It is obvious that such an incident will lead to anger among people and there will be communal tension. If this was the case, the family is in the wrong. If they have consumed beef, they are also responsible. This is a village of Thakurs and they express their sentiments in a very strong way. If they have done this, they should have kept in mind what the reaction would be,” he said.

Nagar then referred to the accused as “innocent children barely 10-15 years old".

“Hindus should not be responsible for peace and order. Muslim victims should remain mute” -- Tarun Vijay, RSS leader

RSS leader Tarun Vijay in an article published in the Indian Express, says that the murder should not have been committed. However, in saying, “lynching a person merely on suspicion is absolutely wrong, the antithesis of all that India stands for and all that Hinduism preaches,” indicates that lynching when it is not rooted in suspicion is not “absolutely wrong.”

Vijay’s article then points a finger at the media for its coverage of the Dadri murder. “But I wonder why there was no outcry from the secular media and leaders when Tika Lal Taploo was killed by jihadis and his daughter was left alone in this world. The secular brand of communalism is more lethal sometimes than the bullets of violent people.”

It then moves to questioning “so-called liberal Muslims.” “Have you done anything to show Hindus that you stand with them when they are assaulted by the Andrabis? Muslim silence on Hindu woes is often taken as support for intolerant Islamists. In many parts of India, cow slaughter is a serious offence,” Vijay writes.

The article then states, “Sadly, secular celebrations of “beef festivals”, as well as the provocative butchering of a cow in a bazaar for political mileage, have pushed a society that worships the cow as mother to question the real motive of the seculars.”

Tarun Vijay then took to Twitter to say that it wasn't the Hindu community's responsibility to maintain peace and the Muslim community should remain silent.

"Why responsibility to keep peace and maintain calm is always put on the Hindus alone? Be a victim and maintain silence in face of assaults!!" Vijay tweeted. 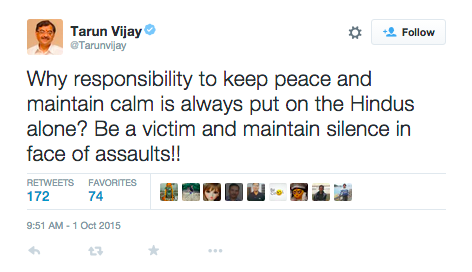 “Some people got agitated after police did not take them seriously” -- Thakur Harish Singh, BJP District President

In a statement that excused the brutal violence, BJP district president Thakur Harish Singh said, “The locals gave samples of meat to the police but they (the cops) did not take it seriously. Then some people got agitated.”

Sharma then excused the incident with the statement “when we hurt people’s sentiments, such clashes take place. This was not a communal riot. The Hindu community worships cows. Whose blood won’t boil if they see cow slaughter.”

In fact, Sharma blamed the police for not registering an FIR after reports of the alleged cow slaughter. "From Friday, we will go from village to village and mobilise people. We will not tolerate harassment,” he said.

Culture Minister Mahesh Sharma, in a bizarre statement, pointed out that no one in the mob had touched a 17-year-old girl who was in the house at the time of the attack. “You must have seen that whenever there is any buzz about cow slaughter, media, people all rush (to the spot). All those who love the cow rush (to the spot). It (the murder) took place as a reaction to that incident (cow slaughter). You must also consider that there was also a 17-year-old daughter in that home. Kisi ne usey ungli nahin lagaayi (no one touched her),” Sharma told The Sunday Express.

The attack was triggered by sudden outrage over cow slaughter,Sharma said. “Momentarily hai (It was momentary). Gaay ke maans par hum logon ka… andar se aatma hilne lagti hai (On beef… our soul starts shaking). You can kill other animals, mutton, and people don’t (react)… (but) when you name cow… We have linked the cow with our mother,” he added.

“What happened there (in Bisara village) that a calf had gone missing. There has been a spurt in the cases of cattle theft. Log raat ke time pashuon ko utha lete hain, wahin kaat daalte hain. They know such an art. They tie the four legs (of the animal) in a special knot, use some instrument, kill it. Within minutes, they skin it, pack its meat in a vehicle, and escape. Within five-seven minutes, they skin an entire adult cow. A gang of just 3-4 persons can do it. They take out everything (from inside the animal’s body), leaving just the skin and bones behind,” The Sunday Express quoted Sharma saying.

“In the same way, someone said that it was beef (in Bisara). It also appeared like beef. Then they announced from the temple that ‘beef was recovered’. ‘Where was it found?’ ‘It was found in his (Akhlaq’s) home’. Perhaps there was a trail of blood coming out of that home. People then reached his home. They got furious, a mob gathered, broke the door. That’s how it happened.” Sharma rejected allegations that the lynching was the culmination of a conspiracy. “A conspiracy cannot be hatched in two hours. A conspiracy requires a month, a fortnight,” he said.

“It’s a very sad incident. We condemn it. But don’t give it a communal colour,” Sharma concluded.