After the highly acclaimed movie Dangal highlighted the role that the Phogat family had played in putting women’s wrestling on the world map, the above dialogue transcended all boundaries to send across messages of women empowerment and grit. It was then just a happy coincidence that the lead star of the film Aamir Khan who had essayed the role of Mahavir Singh Phogat, got another opportunity to congratulate a real-life Phogat sister with the same dialogue after she returned from the Asian Games with the first-ever gold. 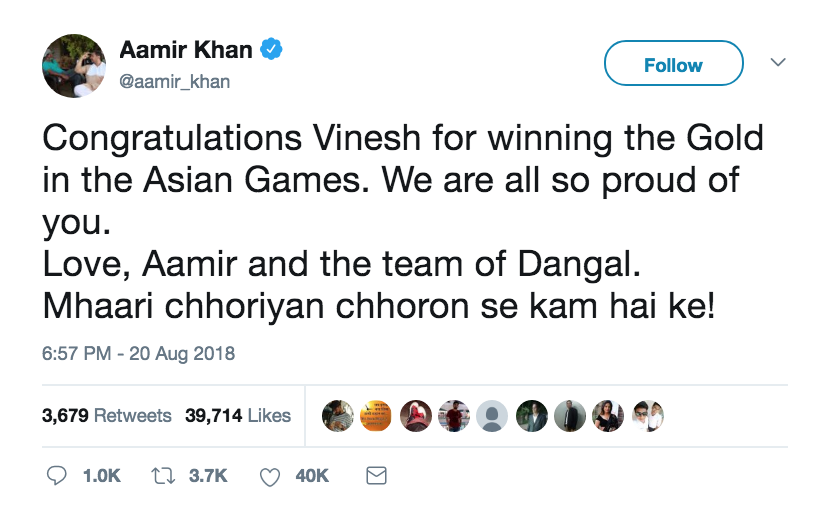 Vinesh Phogat, cousin of Geeta and Babita Phogat, was -- till just a few days ago -- remembered as the girl who exited the Rio Olympics two years ago in tears.

At the time, she was India’s best bet for a medal but as luck would have it, China’s Sun Yanan pinned down the then 21-year-old in an uncomfortable position that injured her knee. In visible pain and with the dream of an Olympic medal in tatters, she asked her coaches to allow her to continue her fight with painkillers but to no avail. Seated in a wheelchair, she watched Sakshi Malik romp home to a bronze, and even as she watched India’s wins with pride, Vinesh knew that the moment could well have been hers.

However, not one to back down, the wrestler fought serious mental challenges before being able to take the field again nine months after the unfortunate incident threatened to end her career. She spent a year in rehab at the Inspire Institute of Sport in Bellary and it was only five weeks ago, under the tutelage of Woller Akos that Vinesh started training for the Asiad. The Hungarian had a tough task ahead of him though. And even as Vinesh had won a gold at the Commonwealth Games a few months earlier, the Asian Games was a tougher event and the main focus was to get her physically fit.

Though she was fast in the first three to four minutes of the bout, she had the tendency of slowing down as the minutes ticked away, and through strength training twice a day Akos sought to rectify just that. With a lot of cross-training and weightlifting exercises, the intention was to build Vinesh’s core stamina and her practice routine underwent severe changes. 10 metre sprints sandwiched between pull-ups, chin-ups and push-ups were added and the result was there for all to see as she returned with a gold in the Madrid Grand Prix just last month. However, representing the country in the Asian Games was an altogether different ask but she showed that she was up for the challenge with technical superiority and mind games that pushed her opponent into the abyss.

Her journey to gold

As Vinesh took the field against China’s Yanan yet again in the first round in Jakarta, the images of the unexpected ending two years ago flashed in the minds of the audience. It had been the same opponent at an almost similar stage. Desperate to seek revenge for ruining her dream of clinching gold, Vinesh attacked Yanan even more tenaciously, not allowing the rival to attack her legs, lest she were injured again. An 8-2 win showed her roaring form and the two wins accorded in the quarters and the semis, against South Korea’s Kim Hyungjoo and Uzbekistan’s Daulatbike Yakshimuratova respectively, meant it was game-on in the finals. But her Japanese opponent Yuki Irie was no pushover.

With Vinesh strategically stronger on her right leg, some major changes were needed in her approach before the final was to begin. Japanese wrestlers traditionally rely on attacking their opponent’s right feet by moving on the right side and using their right arms to jostle the right leg. In a bid to counter this, Vinesh planted her weaker left leg forward and true to Akos’ assessment, with Irie needing more time to stretch back and plant Vinesh’s right leg on the mat, the Indian had more time to counter-attack, thus gaining 4 crucial points.

As the Indian flag fluttered high for the third time in Vinesh’s career, the magnitude of the win was yet to sink in. Braving doubts and low self-esteem, she had managed to silence the nagging thoughts in her own head and the new-found confidence is sure to work in her favor as she returns to fight it out in Tokyo two years later. As she walked away from the Jakarta Convention Centre, the chants were loud and clear. “Mhari chhoriyan chhoron se kam hai keh?”

No Action On The Ground But Plenty Happening Off It

When India Finally Won a Test in Pakistan