Shaheen Bagh and the Idea of India

On a cold wintry night of December 15 2019, a handful of Muslim women in their 70s, 80s and even older had come out of their dwellings in Shaheen Bagh to ‘protest against the proposed controversial Citizenship Amendment Act (CAA) 2019 that intended to make religion a factor in the grant of Indian citizenship’.

Seema Mustafa, reputed author and editor of The Citizen, India’s first major online daily, has now put together in a book numerous articles, essays and columns by 16 well known writers, journalists, academia, human rights activists, lawyers etc from varied faiths under the title SHAHEEN BAGH: And The Idea of India.

There is always a moment, Mustafa writes, “in protests across the world throughout history that changes the course of politics without the people realizing what really happened or why.” And the Shaheen Bagh SIT DOWN was one such moment. Why those elderly women, who were subsequently given the appellation of ‘Dadis and Nanis’, felt compelled to come out of their homes!

They came out of their homes because they wanted to ensure that their menfolk remained ‘safe and secure’, and further that their Indian citizenship is not questioned. Such an apprehension was not misplaced, thanks to the “continuous repression and victimization of Muslims, especially men, across the country – the lynching, arbitrary detentions and arrests during the past five/six years.”

In fact, Shaheen Bagh had become ‘a binding factor for all the struggles and protests not only against the CAA but subsequently also against the proposed National Register of Citizens (NRC) and National Population Register (NPR) that too were considered discriminatory.’

A central minister had urged the voters during the Delhi elections to ‘shoot the traitors’. A BJP contestant described the peaceful Shaheen Bagh protestors as ‘rapists’ and ‘killers’ who would “enter your homes if they were not removed”. The Delhi electorate however thought otherwise and gave a resounding defeat to BJP and a splendid victory to Kejriwal’s Aam Admi Party.

Its rabble rouser leader Kapil Mishra had made vicious speeches demanding that the Police must remove within three days the anti-CAA protestors, failing which the people would, ‘clear them out’. As if on a clue, pelting of stones began in the area on February 23; the following day the entire area had erupted in violence; there were pitched battles between the two communities that soon followed by ‘seemingly organized mobs’ who freely roamed around the lanes and the by-lanes beating Muslims, looting their belongings, torching their vehicles/motorbikes and even homes. . Fifty five people had died at the last count.

The very longevity of the Sit Down, its peaceful nature and positive impact had ironically alarmed the Home Ministry. “Thus tragically the protest that had started peaceably and had remained so for one hundred days despite threats and provocations, should lead, albeit indirectly, to such bloodshed and violence was a tragedy of our times,” rues Seema Mustafa in the book.

An unfortunate consequence of India Independence in August 1947 was the birth of the new state of Pakistan comprising the Muslim-majority states of west Punjab, Sindh, North Western Frontier Province (NWFP) and the East Bengal. A large number of Indian Muslims then migrated to Pakistan but many more had opted to remain in India – their birth place or janambhumi. Since then somehow, and for inexplicable reasons, the loyalty of the Indian Muslims is invariably looked at with suspicious eyes.

I wonder if such a suspicion is justified. Those Muslims who had stayed behind in 1947 did so of their own accord and free will, and are as much bonafide Indian citizens as me and you are. However, here I ask my Muslim brethren to peep into their conscience, and swear by Allah with hands on their heart if their loyalty unreservedly lies with India or do they at times suffer from an illusion of divided loyalty?

Fortuitously, I have many Muslim friends and enjoy cordial and friendly relations with them. I also have a few Muslim journalist colleagues. They are all educated and highly articulate, and talk the same lingua as I do. My personal hair dresser for the past many years has been a Muslim, and so are my masseur and orthopedist. Also my construction, carpentry and house painting contractors are all Muslims and I get along very well with them. In fact, Muslims are by and large an inseparable limb of India’s economy and predominate in many a trade and profession.

As per 2011 Census, Hindus constitute 79.8 and Muslims 14.23 per cent of India’s population; the remaining 5.97 are the sundry minorities. Of the 542 Lok Sabha seats, Muslims enjoy more than 10 per cent vote share in 218 constituencies across the country; their vote share goes up to 20 per cent in 70 of these constituencies.

Traditionally, Muslims have been voting against the BJP that is generally regarded as an anti-Muslim party. Thus the Indian Muslim will always remain as BJP’s bugbear and a major obstacle to its ultimate object of establishing an enduring Hindu Rashtra. How then to disenfranchise the Muslims has become BJP’s most compelling agenda. That explains the significance and the importance of Citizen Amendment Act (CAA), National Register of Citizens (NRC) and National Population Register (NPR) that were hurriedly passed last December in the Parliament and President assent obtained in days.

THE BOOK is divided into three parts. Part One carries ‘Ground Reports from a Protest’ with a joint write up by Sarover Zaidi, an art and architecture teacher, and Samprati Pani, a social anthropologist. Seemi Pasha too has contributed another piece ‘Voices from Shaheen Bagh: February-March 2020’. The article by Zeyad Masroor Khan, an eminent journalist and writer, explains, “How Shaheen Bagh became a Symbol of Dialogue and Solidarity”. Mustafa Quraishi writes another touching piece under the caption “I found my country in Shaheen Bagh”. It is a poignant narrative of how she was advised by her sister-in-law as also a friend (both Hindus) to migrate to another country in Southeast Asia and find a future outside India. And then I thought – “why should I leave? Isn’t that what exactly this regime wants? So then I end up living as a second class citizen in my own country.” How is that better than being a second class citizen somewhere else?

Part Tw expounds in depth “The Idea of Shaheen Bagh” and has contributions from Nayantara Sahgal, the Dehra Dun-based reputed storyteller and author, and Harsh Mander, human rights activist-columnist-author. Some of the other contributors are Professor Emerita Zoya Hasan of Jawaharlal Nehru University, Renuka Vishwanathan, a public finance specialist and a former secretary to the government of India, Subhashini Ali, a CPM leader besides Prof Apoorvanand of Delhi University. Some of the other prominent contributors are Enakshi Ganguly, a human rights activist, Nizam Pasha, a Supreme Court lawyer, Nazes Afroz, a veteran BBC producer, Sharik Laliwala, an independent researcher and Nandita Haskar, a human rights lawyer and writer.

Part Three is about ‘A Riot, A Witch-Hunt’. It has an article under the caption ‘Dissent is Contagious’ by Anirban Bhattacharya, head researcher at Centre for Equity Studies, New Delhi. Seemi Pasha again writes a piece “Terror and its Aftermath” and finally Seema Mustafa’s “Afterword”.

SEEMI PASHA, a Delhi-based independent journalist, has written a meticulous narrative about numerous anti-Muslim riots and communal clashes between Hindus and Muslims that had bedeviled the country’s body politic since the anti-Muslim riots of 1964 in Calcutta in retaliation against the anti-Hindu violence in East Pakistan. That was just the beginning.

Many more and worse riots followed in the various parts of the country. More abominable of those were the 1970 Bhiwandi anti-Muslim riots and 1980 Muradabad massacre when the Provincial Armed Constabulary (PAC) opened fire on a congregation offering Eid prayers in which around 300 people were reportedly killed. This is however not to suggest that the Muslim community invariably behaved like an innocent lamb.

On the contrary, it was the aggressor and instigator in several riots such as Godhra Train Burning in 2002, Vadodara riots in 2006, Kaliachak riots, Malda district in West Bengal in January 2016 and many more. In fact, those riots were like pockmarked spots on India’s supposedly secular façade.

As a reviewer, it is not my job to paraphrase the Book but only to highlight some of its salient features. Its editor Seema Mustafa has brought together a galaxy of well known writers, academicians and social activists who have postulated in their own way upon many of the sensitive issues that touch Muslim sensibilities, biases and prejudices.

In a way, Shaheen Bagh has given birth to a hitherto unknown genre in non-fictional segment. A special attraction of Shaheen Bagh is over 50 excellent photographs in colour. The writers deserve to be congratulated for writing on such a sensitive and delicate issue with utmost empathy. The book is a must for those of us who wish to delve into the whys and wherefores of this lingering suspicion about the loyalty of Indian Muslims. 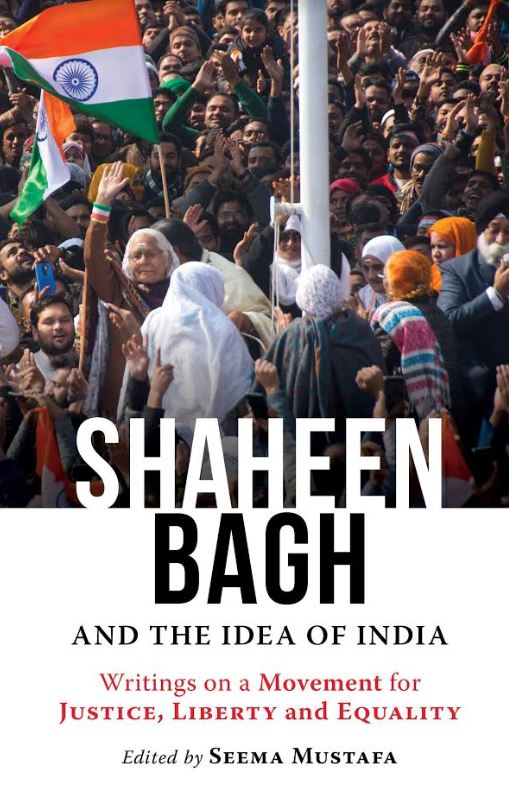