The Fisherman and the Yamuna

Fishing in the Yamuna River has been going on for centuries and it has been passed down from generation to generation. However, the fishing community is now facing serious threat due to increasing water pollution and restrictions imposed by the government. A glimpse of the polluted Yamuna at Kalindi Kunj, New Delhi.

The Yamuna now lies desolated, bringing untreated sewage, plastics and other hazardous waste from nearby industries and suburbs. This poses a serious health threat for the fishing community. Pollution is causing severe damage to the river and fish stocks are on the decline. Many fishermen have left the area since the government imposed the ban on fishing in June 2021 and are left pondering about their future. Fisherman BabuLal, 52, relies on fishing for his livelihood,despite the ban by the government.

Babu Lal (52) is a fisherman from Rai Bareli, Uttar Pradesh. Every morning, he throws his net into Yamuna’s toxic foam and prays for some kind of catch from the perished flora and fauna. After travelling 25kms from his makeshift home, he states that the catch is no longer good. According to him, the government has abandoned its duties by choosing to steal a poor community’s livelihood instead of cleaning a river. In the midst of the river yamuna, Babu Lal threw his net in the hope of a good catch.

While trying to catch fish one afternoon, he observes the water flow is lower than usual. “Fish have declined, especially golden ones, which are now rare in the Yamuna. "We used to catch 20 to 30 kg fish in a day but now we rarely catch 7 to 10 kg fish. You can see a lot of dead fish in the river, which is the bitter reality of Jumna,"says Babu Lal. A fisherman holds an empty net without a catch in Yamuna Left (Babu Lal) alongwith his son in the right (Raj Kumar) while fishing in the Yamuna. In the background of the Supernova Tower, Raj Kumar is helping his father on the banks of Kalindi Kunj. A group of friends wrapped up their fishing as lunch time arrived.Children are often seen helping their families at Yamuna.

A sad generational shift, Raj Kumar (24), works as a delivery boy in the evening shift at Zomato. He fishes with his father Babu Lal in the morning but says that the declining fish population has forced many to change their profession. “Only traditional old people like my father who have been fishing since they were born are still relying on the same”, he says, looking at the now polluted sacred river. Thousands of crores of rupees have been spent on various projects to clean the river; however, pollution is still on the rise, making Yamuna more poisonous day by day. 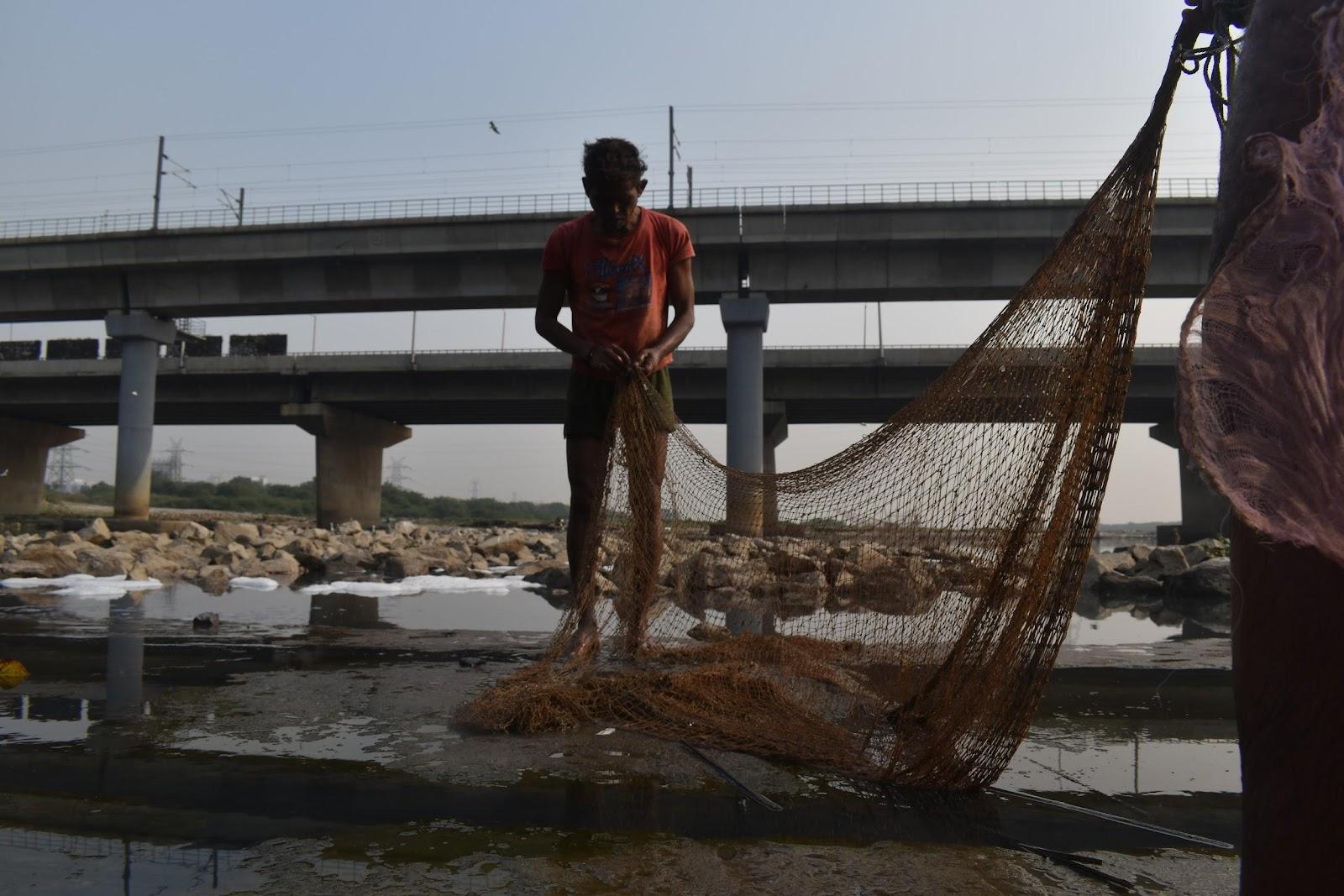