ALWAR: ‘Gauraksha Police Chowki’! Zipping by in a bus as a media person accompanying a fact finding delegation to Rajasthan to look into the lynchings by cow mobs, I could not believe MY eyes. A police chowki--just one step below a full fledged police station---set up for cow protection, or for that matter animal protection, in India seemed to be a joke. But no, it was not. It was for real.

We immediately stopped the bus to take pictures and spent part of the visit to Bharatpur, Alwar, Rajsamand and Udaipur in finding out what this was exactly about. Raesa, a member of the Communist Party of India from Alwar, had immediate information. “These police chowkis were set up by the Rajasthan government in Alwar and Bharatpur allegedly to control cow smuggling,” she said adding that there were 12 such cop stations in the state where some of the worst mob violence under the ‘cow protection’ banner has taken place. The police has failed to control the brutal violence against human lives in the name of cow smuggling. 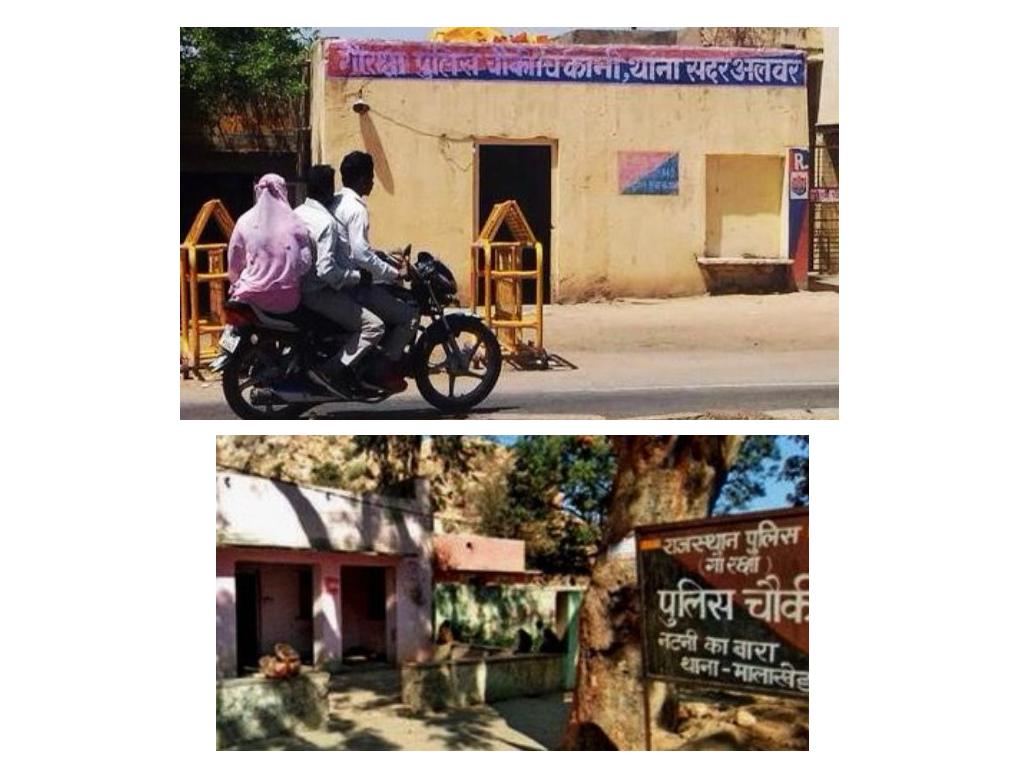 My first question, thus to Rajan Vishal,District Collector and Rahul Prakash,Superintendent of police in Alwar was about the existence of Gauraksha police stations, completely unheard of. Police stations are named after the districts, not for specific tasks that come under the larger purview of the law anyway.

Vishal replied,“ The prevention of cruelty to Animals Act was revised in 2017 by the central government in order to regulate the animal markets and curb trans-border smuggling of cattle. As per the notification no one can bring cattle to an animal market unless he or she has furnished a written declaration that cattle will not be sold for the purpose of slaughter.”

Almost confirming allegations made by rights activists about official police involvement, he said that these police chowki’s were established to keep a check on the vehicles crossing border areas “to Firozpur,Jirka and Nuh(Haryana) for cow slaughtering and smuggling purposes.’’

It all appeared to be a one sided propaganda. My questions remained unanswered. Do we really need a specific police station for the protection of an animal ? Does our Constitution permit it? Why do these exist only in Rajasthan? Why are cows given a special status over humans ?

Later the fact finding report by MP’s, Supreme Court advocates and representatives of the All India Kisan Sabha under the banner “Bhumi Adhikar Andolan”, after an extensive survey also questioned the prejudice evident through the trip.

We visited the families of those lynched, finding them living in penury, as all were dependent on dairy farming that had been snatched away from them. The fact finding report found that “prejudice and clear bias and religious profiling have led to numerous false cases being filed against dairy farmers as cow smugglers and systematic harassment.”

The report further noted that “certain elements of the police in the Mewat region are working in connivance with the communal forces to brand the villagers belonging to the minority community as criminals reminiscent of the British colonial branding of certain tribes as Criminal Tribes.” And stated that the police was found to be highly prejudiced.