Seven months and no bail hearing for Dr Khan

GORAKHPUR/NEW DELHI: “They terrorised us for days on end, a large number of policemen would break into our house in the late hours of the night, make us all get up and sit around, would threaten to take us into custody, my one year old baby would be howling, they would roam through our house, I cannot even begin to tell you what we have gone through,” said Shabista, the young courageous wife of Dr Kafeel Khan, who has now broken her silence to speak out for justice and her husband who has been in jail for seven months without bail.

Dr Khan was picked up on September 2, 2017 on Bakra Eid for the death of a large number of children at Gorakhpurs Baba Raghav Das Medical College who were all encephalitis patients and were hit by a disruption in the oxygen supply. This despite the fact that he was one of the very few doctors visible in trying to save lives.Before his arrest, and after, his family was subjected to inhuman treatment at the hand of Yogi Adityanath’s police.

Speaking to The Citizen, Shabista said that her husband had lost at least eight kilos of weight since the arrest, is a cardiac patient, has high blood pressure but has been housed with 130 hard criminals. She said his old mother, who was moved to address a press conference in Gorakhpur recently, and the family has been undergoing severe hardship and harassment. “They have made us untouchables” she said.

Initially when the family learnt that Dr Khan had fainted in jail their only focus was to “save his life” and have him shifted into better lodgings in jail. They met every single official concerned but nothing was done. In desperation the family went to meet Chief Minister Yogi Adityanath who merely repeated the oft heard platitude,justice will be done. And to the family’s plea to move him out of the general cell asked, “do you think people go to jail for rest?”

Not a single rule was followed with male police men entering Khans house in Gorakhpur at will. The harassment continued for days. They lost count. They were threatened, with the cops not even listening to the mothers pleas to leave as their little girl would howl in terror. Instead they would move around the house at will.

The police then moved to take one of his sisters (two are married in Lucknow) into custody after repeatedly going into her house as well and threatening her.. Terrified she called their brother Adil Khan one night who intervened, and was taken away by the police instead and kept in lock up for the night. At this point, on the day of Bakra Eid, Kafeel Khan who was then in Delhi surrendered for a crime that is still to be established and since then, September 2, 2017, he has been in jail. He had been sent by the family from Gorakhpur to Delhi as in the face of threats they were fearful of his life. “We thought they would kill him and sent him away,” his brother said. He was arrested subsequently.

Asked why they had remained silent, the family members said that if they spoke, or anything about them got into the media, it would have a direct bearing on Khan in jail. He would face the music as it were, and hence the family bore the harassment silently, trying instead to get justice from the administration and the government. But in vain.

Dr Khan’s bail application has not been heard for seven months, with the Allahabad High Court continuously postponing it as either the government lawyer has not turned up, or the reply by the government needs more details, etc etc. In what local lawyers admit is totally unprecedented the High Court at one point showed two dates for the hearing as “pending.” At the moment a new date for the hearing has still not been given with Khans lawyers having written to the judge for a date.

Interestingly the Allahabad High Court in what UP lawyers describe as “unprecedented” has given two ‘next’ dates for the hearing and shown both of them as ‘pending.’ 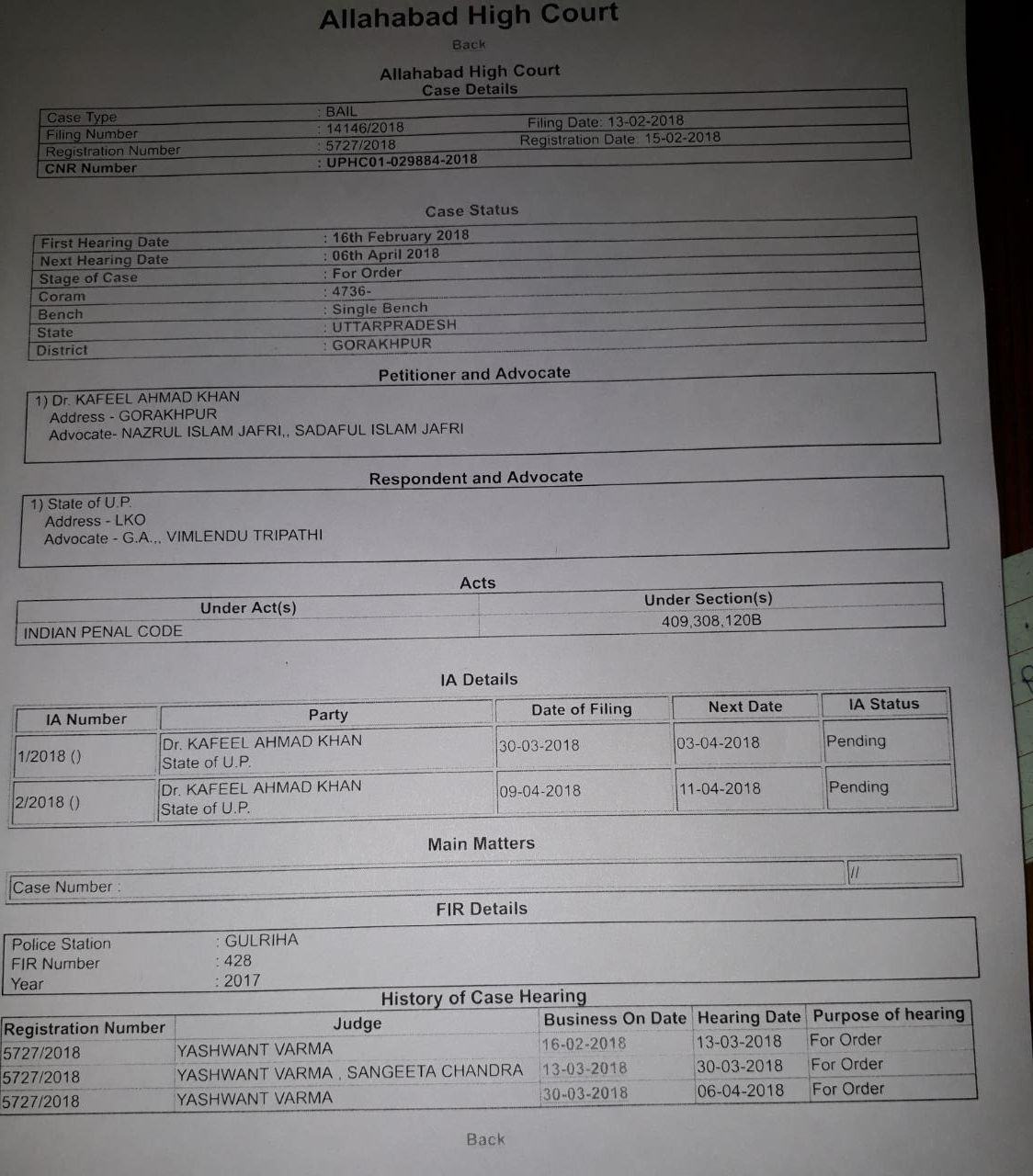 Two dates are given as April 4 that has come and gone, and April 11 of which there is no intimation to the family. March 30, 2018 was the last date that came up but Dr Khan’s bail case was not heard.

There is some optimism now following the Supreme Court’s bail to Manish Bhandari, the oxygen supplier to the Gorakhpur hospital. It was alleged that a shortage of supply of oxygen killed the children, even as Dr Khan worked around the clock to arrange for the same from other sources on the fatal days. A bench of Chief Justice Dipak Misra, Justice A.M. Khanwilkar and Justice D.Y. Chandrachud granted bail as it was told that Bhandari was in jail for last seven months.

The plea for bail was opposed by Aishwarya Bhati appearing for Uttar Pradesh. As Adil Khan told The Citizen, Manish Bhandari was the supplier of the oxygen then perhaps now Kafeel Khan will also be given bail.

Bhandari was booked for criminal conspiracy and criminal breach of trust under sections of the Indian Penal Code. But was unable to secure bail until the apex court intervened in a matter that should have been settled by the lower court without delay.

The difficulty for Khan is that he cannot even move the Supreme Court for bail, as his High Court hearing has not even come up. As the local lawyers said, these doctors are all in for first time offences, are not criminals, and yet they are being harassed and victimised by the Yogi government beyond all comprehension.

Significantly, the head of department and doctors senior to Dr Khan who were directly in charge did not make an appearance during the crisis and today remain completely free. There is no case against them. Khan who was at home when he got a message that there was a disruption in the oxygen supply rushed to the hospital as his wife said, and got into trouble. Shabista said that he had not called the media, and was just doing what he felt was his job as the children were in jeopardy. What kind of justice is this?