Despite Indian Media Blackout, "Modi Go Back" Protests In London Have Major Imapact

LONDON: Hundreds of protestors marking the venues visited by Prime Minister Narendra Modi, but not a word of it appeared on Indian television and was barely---if at all--covered by the Indian media. The British and the world media, however, recognised the protesters not just through their coverage but also in a question to PM Modi asking him what was his message to the protestors outside. Needless to say he did not answer the question.

The demonstrations were large given the odds, with even the Nepalese in London joining in in protest against the blockade of goods and fuel to their country by India. Most other rights groups, including a vocal Sikh contingent, joined the protests all all shouted slogans centering around “fascism”, “genocide”, asking Prime Minister Modi to go home. And shouting “Cameron Shame Shame” when the Indian Prime Minister was being hosted by the British Prime Minister for lunch at 10 Downing Street. 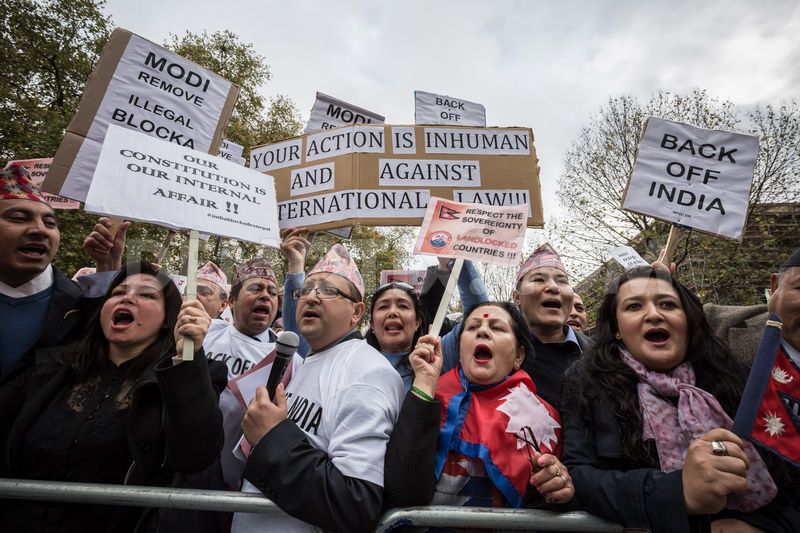 Nepalese in London join the protests

The “black out” by the Indian media of the protests was made even more stark as the British newspapers came out with detailed reports. The Guardian reported for instance: Several hundred demonstrators representing Gujarati, Sikh, Tamil, Kashmiri, Nepali and women’s groups chanted ”Modi go home” and “David Cameron shame shame” as the Indian prime minister was welcomed at about lunchtime on Thursday. Modi, a Hindu nationalist who was elected after a landslide victory last year, was banned from the UK, US, and several European countries until 2012 after anti-Muslim riots a decade earlier in Gujarat, in which thousands died. “ A tiny group of less than 50 Modi supporters were also present, but at a distance.

Prime Minister Modi who in the initial schedule was slotted to visit Cambridge University cancelled this. The Ministry of External Affairs spokesperson in Delhi of course claimed that he had never accepted the invitation extended by the University. In fact senior Professors and academics of the University wrote a letter in protest to the Vice Chancellor Leszek Borysiewicz stating as reported in The Citizen earlier, "Given that your invitation comes at a time when several prominent Indian writers and intellectuals are returning their state honours in protest against the ongoing assault on civil liberties and academic freedom under Mr Modi's government , we believe that Mr Modi's presence at our institution will bring the university into serious disrepute.” 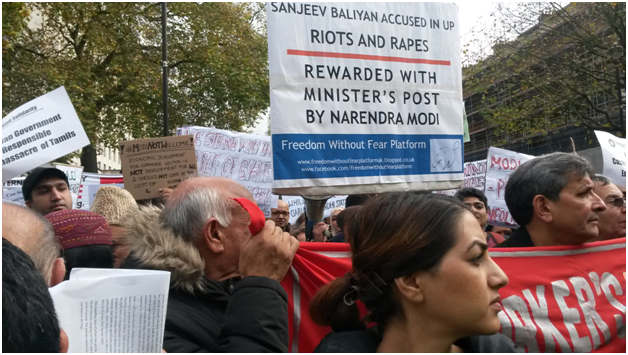 The University authorities at the time had said that the visit would go ahead but the heated debate and spate of protests planned by the students and the faculty together seems to have ensured it being quietly dropped from the PM’s itinerary.

The highlight of the protests came a day before PM Modi’s visit to London with a light projection drawing a comparison with fascism, on the walls of the British Parliament. This move by the protestors received worldwide attention, and despite the audacity did not even attract a knuckle rap from the British police. 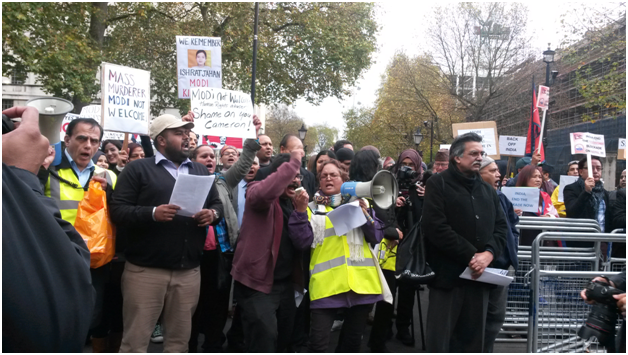 The protests will continue through the visit with the ‘Modi Go Back’ campaign making its presence felt on the streets of London with slogans and placards like “HIndutva is a Threat to Indian Unity”, “Stop Religious Persecution in India”, “Modi not Welcome in UK.” There were more provocative slogans and placards as well, all duly reported and commented upon by the free British media unlike the Indian media that seemed to be following unwritten ‘instructions’ till the last channel. Indian cameras passed by the protestors making sure that the lense remained focused in the opposite direction.