Farmers Protests - Then and Now

Jat farmers of Western Uttar Pradesh and Haryana have made their presence felt several times in the past as well. Huge protests have taken place in past decades, under kisan leaders like Charan Singh and Mahendra Singh Tikait. Both cut their political teeth on farmers issues, with Charan Singh going on to become the Prime Minister of India on the basis of the farmers support across north India.

Singh’s son Ajit Singh was unable to step into his fathers shoes, and the huge welcome he received on his first visit to Baghpat, slowly dwindled to levels where even this constituency became uncertain. I remember how the roads were lined with farmers all the way from Delhi to Baghpat to get a glimpse of their icon's son… and how overwhelmed Ajit Singh was with the attention. A Jat farmer brought the desert to him, swimming in ghee and he was ordered to eat it. Ajit Singh was left with no choice and he battled through the ghee, but was unable still to enter the heart of this community.

The most striking difference to my mind between the huge mobilisation then and now is the presence of women from all the states. Punjab of course, leads but women farmers have joined the protests in the patriarchal settings of Haryana and UP as well. Driving tractors, they have broken through the patriarchal shield and left their homes to raise slogans, and camp with the menfolk at Singhu, Ghazipur and Tikri borders.

A video of an 80 year old woman farmer from Muradnagar (UP) driving a tractor has become viral. She drives effortlessly as she gives an interview with at least eight to ten men piled up on the tractor. She is one of about ten tractors that were returning from Ghazipur. Asked why there were not more women, she smiles and says ‘you know what these men are like’ or words to that effect, but adds that more and more women are joining the protests by the day.

The participation of the women in protests is always a sign of intensity and depth, how deeply the issues have penetrated the homes. That women have been given the green signal to leave the hearth and the home as it were, and in the process ensure the participation of entire families in the protests. Of course 20 years ago patriarchy was even more entrenched but it is too early to say whether the large turn out of women actually constitutes a serious challenge to feudal patriarchy that rules these districts of north India.

Significantly, the farmers have had to contend with the specific demands of women with the little stores that were opened at the protest venues now stocking sanitary pads and other such female requirements. Portable toilets were set up for the women, and essentially patriarchal protest sites were made gender sensitive. The protests, thus, acquired a deeper hue with women and children becoming integral to the agitation across.

A second striking difference is the visible effort by the farmers to cut across caste and community barriers. Charan Singh and Tikait pandered to such considerations, and while not always being hostile to others, remained Jat leaders in the best of times. The effort this time has been to democratise the struggle, and join hands with all other communities and states. Rakesh Tikait is a case in point as he is his fathers (Mahendra Tikait) son and yet has doubled efforts to ensure he is not seen as just a Jat farmer leader.

The farmers of all communities have made a special show of embracing each other, be it the Sikhs of Punjab, the Hindu Jats of Haryana and Western UP, the marginal farmers of these states, and now even the Muslims. Rakesh Tikait drank water brought to him by a Muslim in front of thousands of farmers, endorsing the message ‘we are all in this together.’

In fact, often earlier local farmer leaders sought to make their meetings and protests as per the dominant community. But now they are working as obstacles to prevent efforts to divide them into compartments, insisting that there is no division between them. And calling out those working to disrupt their unity. Significant and interesting.

A third difference is the willingness to share the leadership. This is again a shift from earlier times when the personality and not the collective dominated. It is true that after his tears galvanised farmers of the Jat land, Rakesh Tikait has emerged as a major face of the movement. But for the initial and crucial weeks --- as even now---the leadership has remained with 40 farmers organisations spread across the states who have been working closely to mobilise, set the strategy and agenda, without allowing turf and ego to come into play. In fact, the leaders continue to support each other publicly and ensure that strategy evolves around consensus. 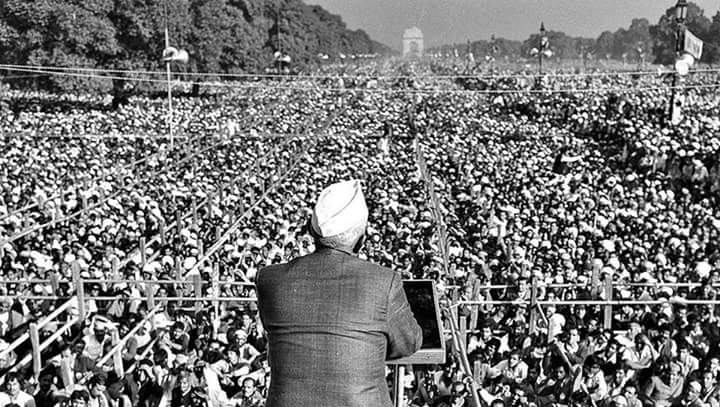