The war in Ethiopia between the Government and its Eritrean allies and the Tigray People's Liberation Front(TPLF) continues with an increasing death toll and a catastrophic humanitarian crisis.

Reports put the death toll in the 13 month war at thousands of civilians with 400,000 facing famine conditions in Tigray and 9.4 million people needing food in the northern region. In recent comments Tedros Adhanom Ghebreyesus, the Director-General of the World Health Organization Recent said “ 'Nowhere in the world are we witnessing hell like in Tigray”. He added that while WHO had been permitted to send medicine and medication to other regions of Ethiopia, it had not been allowed to send any into Tigray since July 2021. Doctors were using expired drugs and their stock was also getting exhausted.

A recent move by Prime Minister Abiy Ahmed, a 2019 nobel prize winner and former Army Lieutenant Colonel, to pardon some leading Tigrayan politicians arrested over the past year, and suggest a national dialogue. Among those pardoned were Eskinder Nega, leader of the opposition Balderas for Genuine Democracy party; Jawar Mohammed, the owner of a media company, and Bekele Garba. Also released was Abraha Desta, a former member of the federally-appointed Tigrayan administration and a critic of the TPLF.

These developments had raised dim hopes, as voiced by the UN Secretary General, that the Ethiopian Government could be thinking of arriving at some political arrangement to end the war. The remote possibility of a suspension of the war was also voiced by some American Administration officials who said there was a moment of opportunity, if the parties were willing and able to seize it.

The TPLF leadership had also called on the UN for a no-fly zone for hostile aircraft over Tigray, arms embargoes on Ethiopia and Eritrea, and a mechanism to verify that external armed forces had left Tigray. They also demanded that Abiy step down. Abiy for his part continued to do what he had promised repeatedly—lead his army on the frontlines to a victory against the TPLF.

The former US Special Envoy Jeffery Feltman had said in November 2020, after discussions with the PM and TPLF leadership, that "nascent progress" toward getting all parties to Ethiopia's conflict into negotiations on a ceasefire risked being outpaced by an "alarming" increase in military operations.

On 11th January US President Biden had called Abiy, who won the recent elections by a landslide , to urge him to “accelerate progress toward a negotiated ceasefire” and open up humanitarian access across the country. The Ethiopian Government’s immediate response on the ground was an airstrike in which at least 17 people, including women and children, were killed. Subsequently on the same day missiles hit a flour mill in Mai Tsebri, in the Tigray region, killing at least 17 people and wounding dozens.

The attacks took place hours after the Ethiopian government had issued a call for “national reconciliation”. One consequence of the attacks was that aid organisations suspended their operations in an area of northwest Tigray where 56 civilians were killed by an air strike.

The war in Ethiopia had started on 4th November , 2020 when Prime Minister Abiy Ahmed began a military campaign in the country’s northern Tigray region, hoping to vanquish the Tigray People’s Liberation Front, considered to be his most intractable foe and accusing them of attacking army camps. His becoming PM in 2018 had ended nearly three decades of TPLF dominance over Ethiopia. Abiy claimed that the TPLF wanted to hang onto central power. The Tigrayan leadership denied any such intention and instead accused Abiy of wanting to centralise power to the detriment of the regions.

But despite the PM promising a swift campaign, in June 2021 the government’s army suffered a major defeat and the fighting moved to the southern part of the country. The TPLF recaptured most of Tigray by June before advancing into the neighbouring regions of Afar and Amhara. In late October 2021 , Tigrayan rebels captured two towns near Addis Ababa, the nation’s capital. The government declared a state of emergency and called on citizens to arm themselves. Fears that the TPLF forces would march on the capital Addis Ababa Fears of a Tigrayan forces’ march on Addis Ababa had led the United States, France, Britain and other countries to urge their citizens to leave Ethiopia.

By the end of November 2021 things had changed on the ground. The supply of armed drones reportedly by Turkey, the UAE, China and Iran enabled the government forces not only to thwart any advance by the TPLF on Addis Ababa but forced them to retreat from the northern Amhara and Afar regions. The government dismissed statements that the TPLF forces were retreating voluntarily to create an environment for peace. Abiy was seen in uniform on state TV in what appeared to be Afar.

Both Ethiopia and Eritrea had initially denied that Eritrean troops were assisting the Ethiopian government. But lately after the TPLF accused Eritrean troops of attacking them and being engaged in massacres, the Eritrean President Isaias Afwerki said on TV that his troops would prevent Tigrayan forces from attacking Eritrea or threatening the stability of Ethiopia. The United States had repeatedly called on Eritrea to withdraw its forces.

As the fighting showed no sign of abating concern focused on the humanitarian and human rights aspects of the conflict. Amnesty International and Human Rights Watch in a joint statement said that people in western Tigray interviewed by phone in November and December had said that Amhara security forces and militias were engaged in abuses and killing Tigrayan civilians attempting to escape the violence.

The UN Human Rights Council had held a special session on Ethiopia at the behest of the European Union. A resolution was adopted to set up a three-member panel of experts for one year to collect evidence and identify those responsible for violations with a view to future prosecutions. The Council voted to send international investigators amid warnings of looming generalised violence after a senior U.N. official said there had been violations on all sides and mass arrests under a government crackdown. .

Ethiopia had criticised the move and said it was "extremely disappointed" and vowed not to cooperate, describing the mechanism as "politically motivated". The African Group of countries wanted the resolution to be rejected, claiming that the investigative mechanism was "counterproductive and likely to exacerbate tensions". But six African countries including Senegal and Sudan abstained.

Earlier the state-appointed Ethiopian Human Rights Commission had worked with the U.N rights office to investigate accusations of abuses, and claimed it was was ready to do so again. The joint investigation led to the conclusion that all sides in Tigray's conflict had committed violations that could be treated as war crimes. Tigrayan groups said it had ignored well documented mass killings by the government troops.

Diplomatic efforts led by the African Union to try to reach a ceasefire had not achieved anything. The Union had sent Olusegun Obasanjo, a former president of Nigeria, as a mediator but the effort proved useless in achieving any breakthrough. The recent attempt by President Biden to talk Abiy into a peaceful political settlement had also not been fruitful.

Given Abiy’s own personality and the continuing support from Turkey, the UAE, China and Iran it was unlikely that the PM would agree to any political talks or negotiations until the entire country was under his control and the TPLF had been effectively decimated. That could take time and till then the people of Tigray would, as Tedros Adhanom Ghebreyesus, said, continue to live in “hell”. 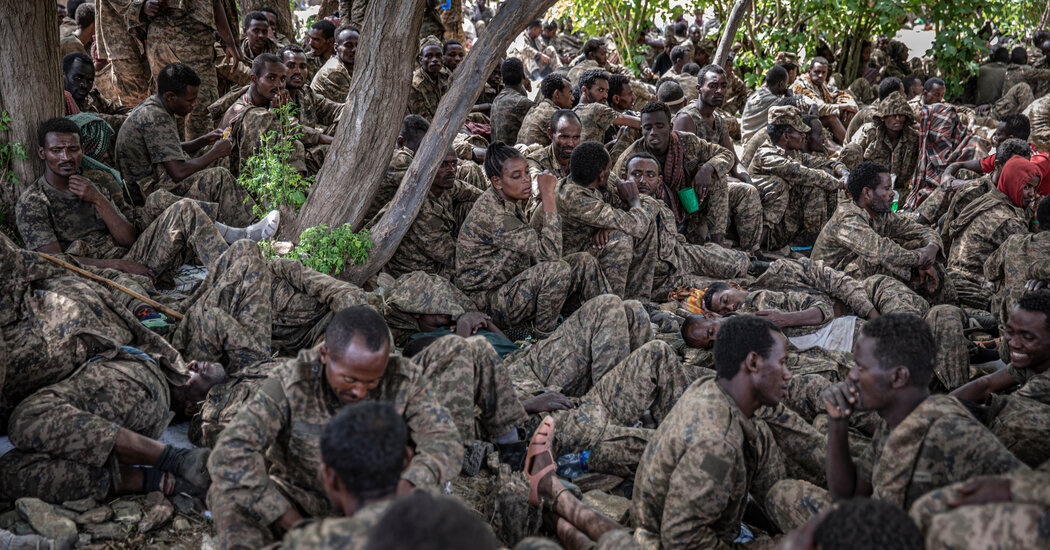