Women take to social media to name and shame harassers

A year since the beginning of the #MeToo movement on social media which sought to expose incidents of sexual harassment and assault committed by those in positions of power, women in the Indian media and entertainment industries have come out with their own stories of violation and harassment.

Former actress and Miss India winner Tanushree Datta set the ball rolling with allegations that she was harassed on set by veteran actor Nana Patekar, with the complicity of director Vivek Agnihotri and choreographer Ganesh Acharya.

Then, on October 6, a former employee of Phantom Films – a production house set up by directors Vikas Bahl, Anurag Kashyap, Vikramaditya Motwane and producer Madhu Mantena – accused Vikas Bahl of sexual misconduct against her back in 2015 in an article on HuffPost India. The survivor claimed that Bahl misbehaved with her in her hotel room when the team was on tour for promoting a movie, and kept gaslighting her afterwards. She also said she had informed Anurag Kashyap about this that very year, but that no action was taken by either Kashyap or Phantom Films.

Kashyap later took to twitter to announce the dissolution of the production house, and issued a two-page statement about the incident: 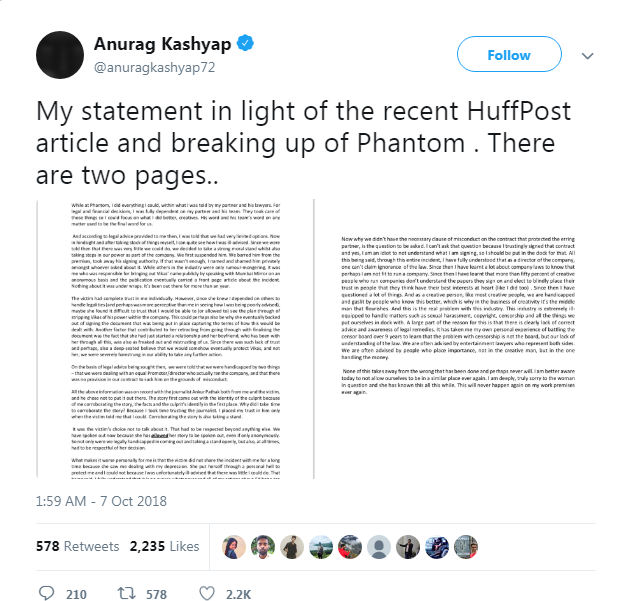 Actress Kangana Renaut, who worked with Bahl on the movie Queen – which was about women’s empowerment – recently came to the support of the Phantom Films employee, and accused Bahl of misconduct against herself in 2014. “He’d bury his face in my neck, hold me really tight and breathe in the smell of my hair,” she said in an interview with India Today.

The #MeToo movement raised a furore on the Indian social media on October 4, when Twitter user Mahima Kukreja tweeted against YouTuber and comedian Utsav Chakraborty, accusing him of sending her unsolicited pictures of his genitalia. A number of other women, including minors, responded to Kukreja’s tweet, claiming that he had harassed them with messages and asked for nude images. Comedy group All India Bakchod, whose sketches often featured Chakraborty, took to Twitter and issued a statement saying that “the accusations describe a pattern of behaviour that is unacceptable”, and delisting all videos featuring Chakraborty from their YouTube channel.

Chakraborty initially denied the allegations in a long Twitter thread, citing mental health issues, but later posted an apology, saying he couldn’t think of himself as a victim any more and asking “how to make things right”.

East India Comedy’s Sapan Verma was also accused of catcalling and harassing a woman when she was auditioning for a TV Show, but denied the allegations saying that he could “very confidently verify” that the incident never took place at all.

Women also came out on Twitter against HuffPost India’s former trends editor and comedian Anurag Verma for sending them inappropriate videos on Snapchat. Verma later apologised for his behaviour, saying that he recognised that he sent the content wrongly believing it to be funny, and recognising that his actions “have been problematic”.

Bestselling author and columnist Chetan Bhagat, too, issued what seems to be an apology on Facebook, after a woman journalist’s WhatsApp screenshots of him insistently trying to ‘woo’ her made the rounds on social media platforms. Confirming the screenshots to be authentic, he said that he had “felt a strong connection” with the woman in question and “misread the friendliness”. He clarified that no lewd exchanges or physical exchanges took place between him and the woman, and also stated his apology to wife Anusha Bhagat. 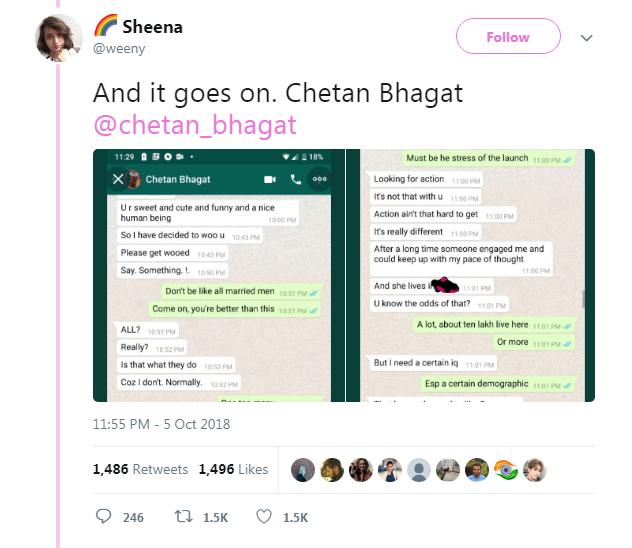 Many women in journalism and news media also took to social media to expose sexual offenders in the industry. The #MeToo fire against offenders in news media began on October 5, when journalist Anoo Bhuyan of The Wire accused Mayank Jain, a reporter at the Business Standard and an ex-employee of Scroll, of making unwanted sexual advances towards her. Many other women, including Feminism in India editor Japleen Pasricha, shared their accounts of similar experiences with Jain, enclosing screenshots of their conversations with him. Jain has yet to respond to the allegations. He has, however, left all media-related groups on WhatsApp and Twitter. 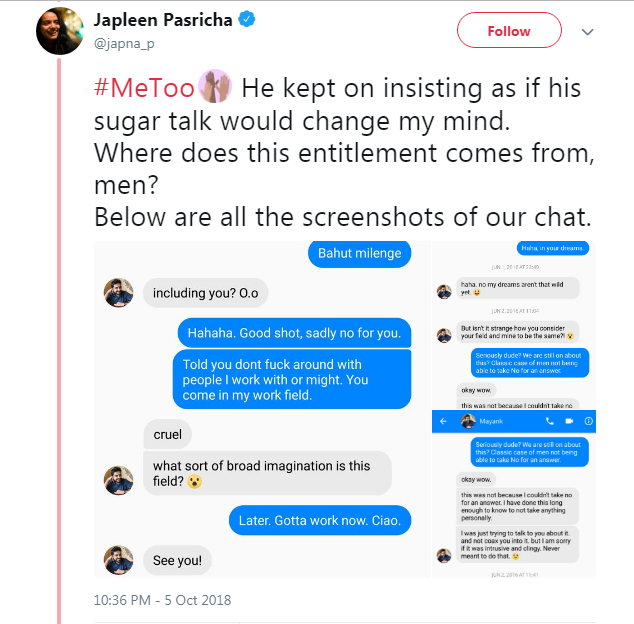 Author and journalist Sandhya Menon then shared three accounts on Twitter of harassment against herself by prominent media editors, sparking debate about the way employers deal with reports on such actions of sexual misconduct.

Menon first shared an instance of being harassed by K.R. Sreenivas, who is currently the resident editor of The Times of India in Hyderabad. Her account dates back to 2008 when she and Sreenivas both worked for the Bangalore Mirror, and accuses the latter of having put his hand on her thigh and saying that he and his wife had grown apart, while dropping her home one night. Menon later reported the incident to HR, but says her complaints were dismissed.

Sreenivas responded to the allegations on Twitter by submitting himself to investigation and citing TOI’s decision to carry it out under a “highly empowered committee” against sexual harassment “headed by a senior woman”. However, Menon believes that the investigations may not yield much result considering that the woman heading the committee had said in 2008 that she knew the man, and found it unlikely that he had committed any such behaviour towards her.

Later, journalist Pavitra Jayaraman responded to Menon’s tweet with her own account of harassment at Sreenivas’s hands while she was interning with Femina Bangalore as a 20 year old.

Menon then tweeted about an account relating to Gautam Adhikari, former editor-in-chief of DNA in Mumbai, alleging that Adhikari forcibly kissed her on a night out and then told her not to disclose the incident to anyone. Menon’s tweet was met with a response from former TOI journalist Sonora Jha, who accused Adhikari of calling her to his hotel room to discuss flexible hours and then forcibly kissing her, back in 1995 when he was the executive editor for the paper. Adhikari, however, in an email to Scroll said that he “did not recall any of this”.

Lastly, Menon talked about harassment over text message from Hindustan Times associate editor in New Delhi Manoj Ramachandran back in 2005. According to Menon, she was 25 years old and taking shelter from the floods in Mumbai when Ramachandran took her number from a mutual friend and proceeded to text her an “I want to fuck you”.

Menon also shared anonymous stories of sexual harassment sent to her by other women. One such account accuses novelist Kiran Nagarkar of molestation during an interview. The survivor, who later identified herself as Poorva Joshi, said that “the environment was one of the most uncomfortable ones” she had been in, and accused Nagarkar of sitting too close to her on the sofa, insisting on a hug after, and lingering his hand on her arms, making her uncomfortable. 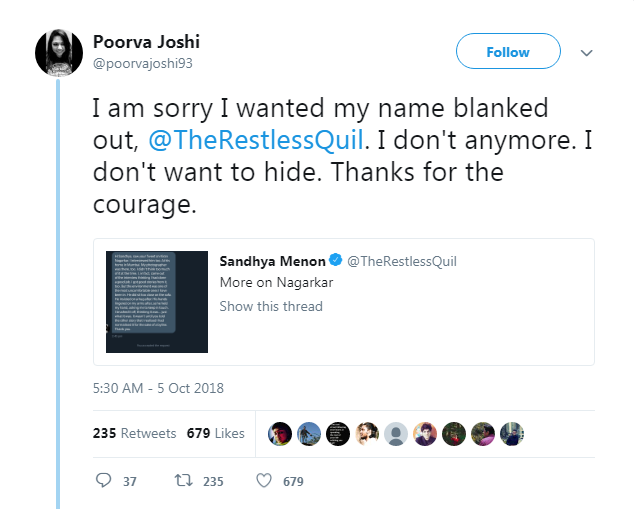 Another anonymous account shared by Sandhya Menon accused poet Sudeep Sen of inappropriately touching a woman, and advertising professional Mihir Chitre for unwarranted sexting. While Sen is yet to respond to the allegations against him, Chitre tweeted an apology on Friday, saying that his “idea of asking someone out or flirting has clearly been wrong enough for it to hurt some women” and that he does not want to defend the hurt he has caused.

Ex-lawyer and former Hindustan Times correspondent Avantika Mehta accused the newspaper’s national political editor Prashant Jha of making her uncomfortable with his sexual advances sent through text messages. Mehta first spoke out against Jha in an anonymous account on FirstPost, but later identified herself as the victim on a Twitter thread, saying that she did “everything and beyond not to piss him off” when he said he wanted to hit on her, and enclosing screenshots of their conversations. She clarified that she was no longer employed with Hindustan Times at the time this harassment took place and hence could not report it. 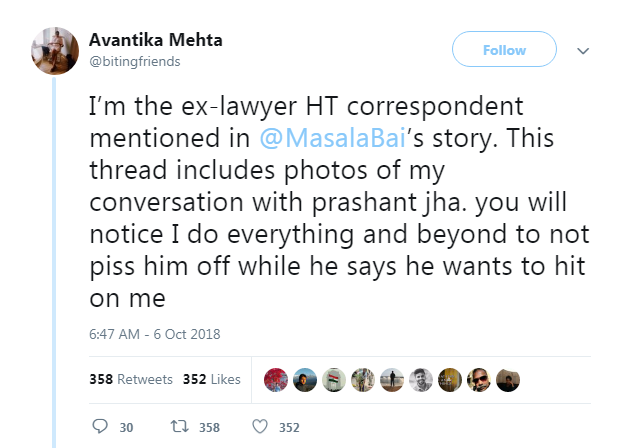 Two female journalists, who studied with The Quint’s senior journalist Meghnad Bose at the Asian College of Journalism, Chennai, in 2015, also accused him of sexual misconduct, after journalist Divya Karthikeyan shared an anonymous tweet accusing Bose of inappropriately touching a woman. One of the victims alleged that Bose “bullied and harassed” women, and inappropriately asked her to “sit on his lap” many times back in college. 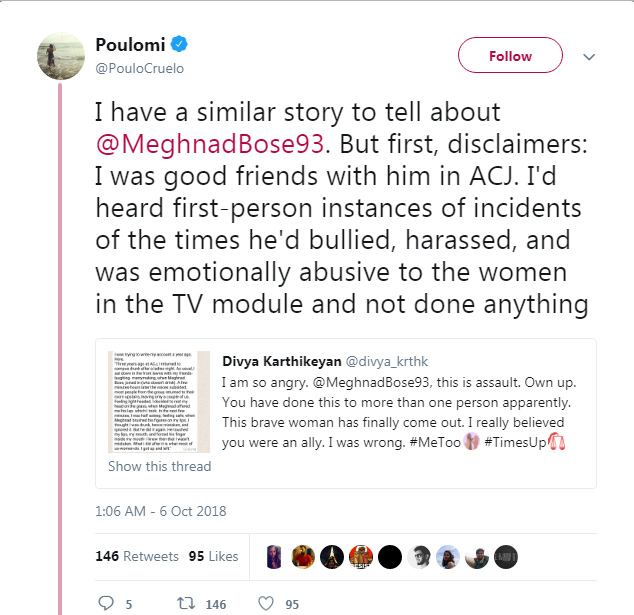 Another journalist, Theja Ram of The News Minute, accused Bose of making sexist comments. Bose later took to twitter and issued an “unconditional apology” to all his victims. 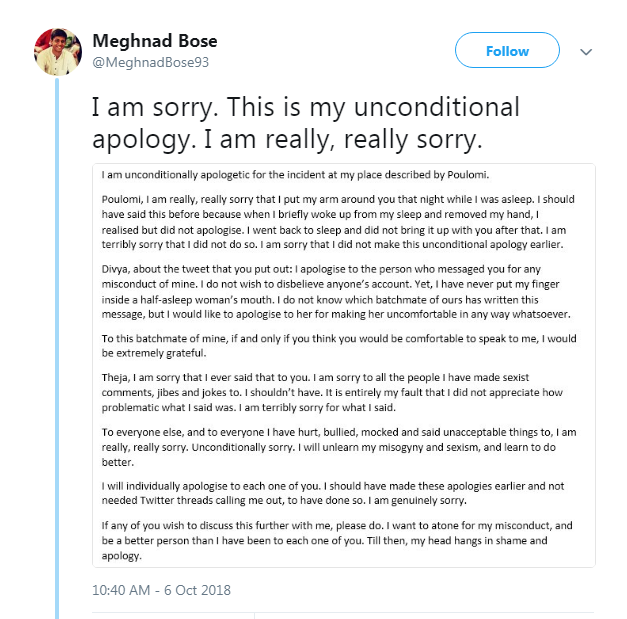 The Millenium Post’s executive editor Arya Rudra was also accused of sexual misconduct and harassment. Reporter Anindya Tripathi in a facebook post accused Rudra of making sexual innuendos, bombarding her with phonecalls, gaslighting her, and stopping her from going home. Rudra has yet to respond to the allegations. 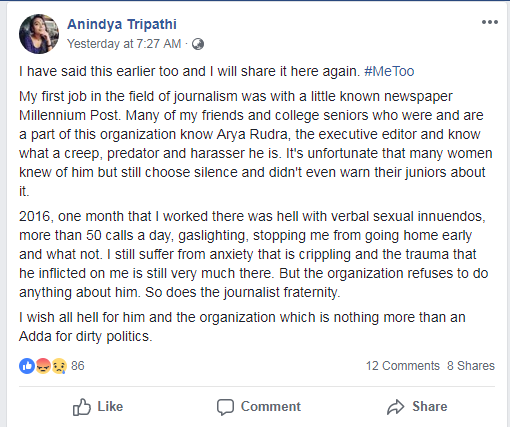 Many other women in the media shared their #MeToo stories on Twitter without naming the harasser. Journalist Rashmi Sinha accused a present-day deputy executive editor of a news channel of approaching her to sleep with him.

Journalist Dilpreet Taggar accused a former head of guest team at Times Now, who is currently employed at Republic TV, of “unprofessional behaviour and crass remarks” in a tweet. 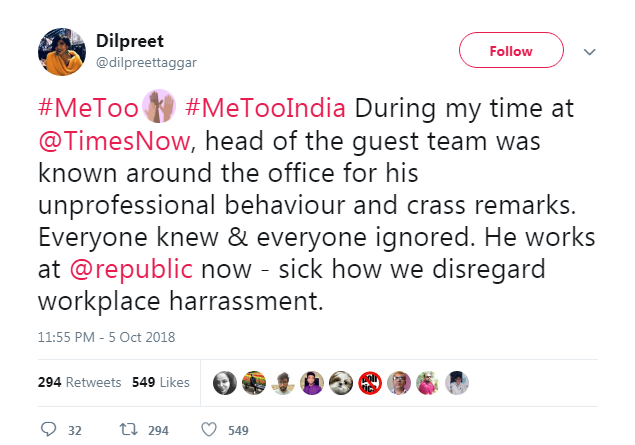 NDTV subeditor Niharika Banerjee tweeted about facing harassment by a senior copy editor at The Economic Times during an office party. 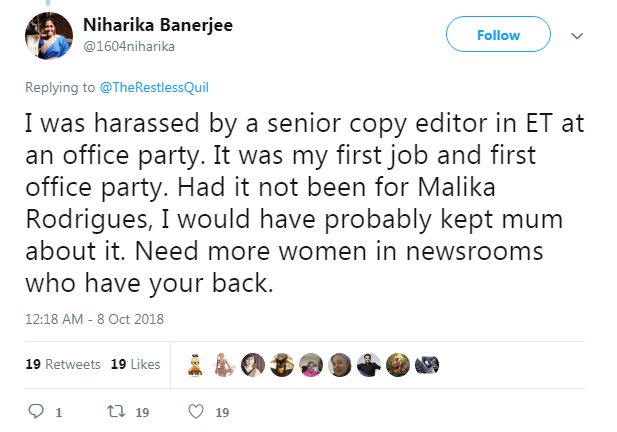 Meanwhile, some journalists also took to Twitter to share incidents of harassment from people outside the news industry. The Caravan’s Nikita Saxena accused an advertising executive she was once interviewing of having inappropriately kissed her on the cheek without her consent. 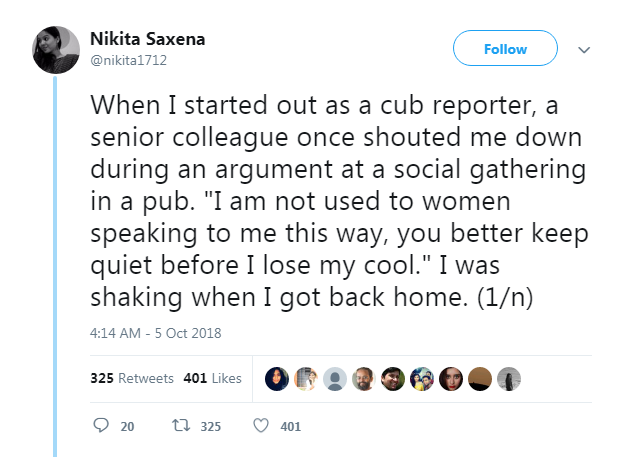 Saxena’s tweet started debate on the lack of power journalists have over their sources, and how they often have to undergo harassment for the sake of a byline. Journalist Neha Dixit said in a tweet that a senior woman editor once told her to “put up with it” when a source puts his hand on her thighs and gives her information, highlighting the connivance of senior professionals in cases of sexual misconduct. 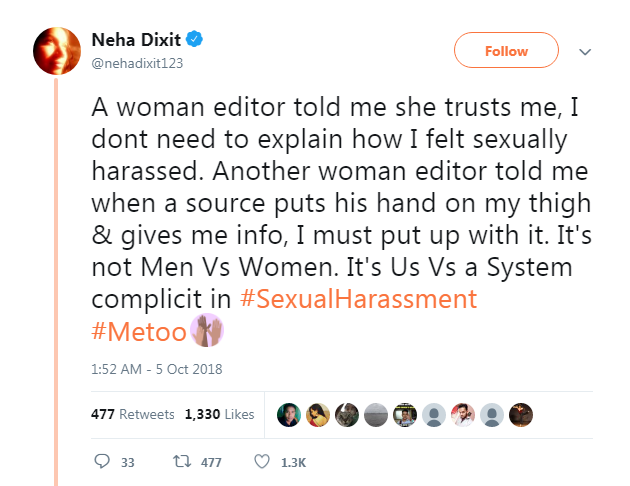 The scores of allegations against media professionals have sparked discussion on due process with regard to sexual harassment in the workplace. Employees at The Times of India issued an internal petition to editors, emphasising “the importance of carrying out a thorough and swift investigation”, and further stating that “as a newspaper that has proactively covered the #MeToo movement and written editorials thundering against sexual harassment at the workplace, the least we can do is practise what we preach”. Meanwhile, Hindustan Times officials have also stated that they will begin investigations against the accused employees very soon. Similar notes have emerged from officials at HuffPost India, Business Standard and The Quint, all of whom have employees who have been accused of misconduct under this latest phase of the #MeToo campaign.

In a press release issued on Monday, the Delhi Union of Journalists’ Gender Council welcomed the movement, saying that it “expects that the managements of all the various publications that the accused journalists work for will take cognisance of the complaints, refer them to the Internal Complaints Committees mandated by law, examine the charges and take due action if the accused are found guilty”. The statement further called “for solidarity and a re-examination of existing practices and attitudes at this difficult time, so that the workplace becomes safer and provides all journalists, irrespective of gender, with equal opportunities in these challenging times”.

This is a crucial juncture for the Indian media and entertainment industry, where employers need to review their mechanisms for dealing with complaints of sexual harassment and take action against such instances at the workplace. Only then will the #MeToo movement achieve fruition.