Star Power and Spectacle in Elections 2019

The 2019 Lok Sabha elections were abuzz with celebrity involvement. Most famously perhaps, there was the ‘non-political’ interview of the question-averse Prime Minister Narendra Modi, for which Akshay Kumar, a Canadian citizen known for his roles in several patriotic Hindi movies was brought in.

The interview, broadcast when campaigning was at its peak and involving a major star from the film industry, shows how much the 2019 elections relied on the star power to sway the public.

Kanhaiya Kumar, the CPI candidate from Begusarai, had celebs like Swara Bhaskar, Javed Akhtar and Prakash Raj campaigning for him in his constituency. Bhaskar tweeted in his support that “Kanhaiya Kumar is a principled politician & an admirable & fine orator. Hope he gets to display these skills & his sincerity in the Parliament.”

While Prakash Raj tweeted saying that “Begusarai is rising up to Kanhaiya Kumar. As I travel with him I can see hope in the eyes of the people. I can sense empowering n ensuring a citizen’s voice. I’m proud to be by his side.” 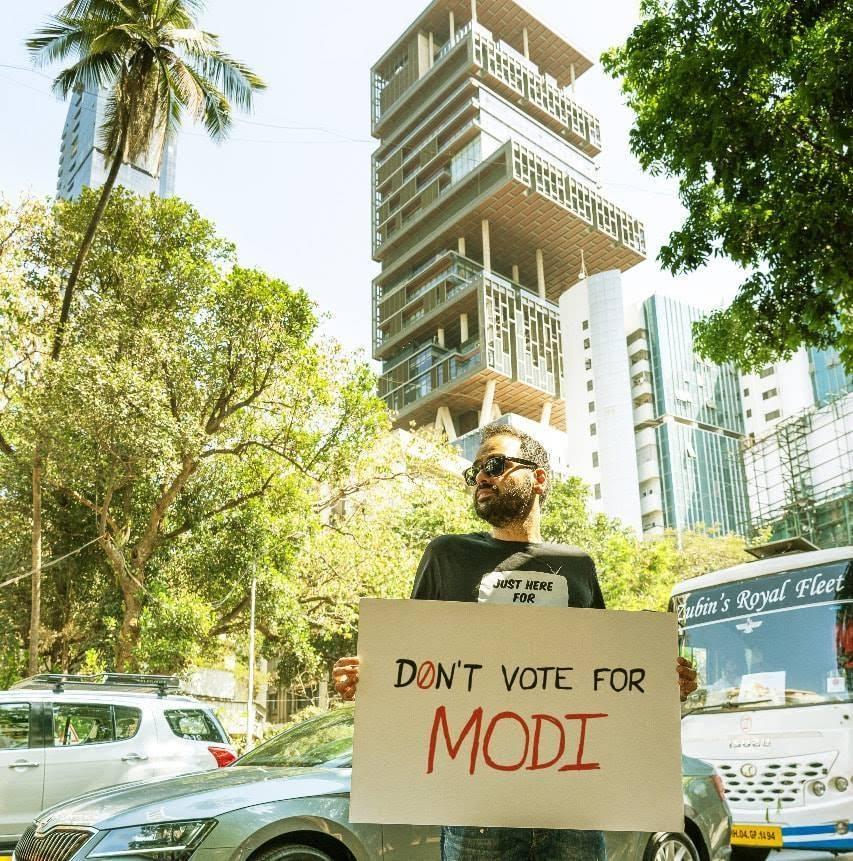 Comedian Kunal Kamra holds a placard in front of Antilla, home of the family of Neeta and Mukesh Ambani, urging people not to vote for Modi

There were celebrities like Akshay Kumar and Vivek Oberoi who came out in open support of the BJP. Around 900 artistes including Pandit Jasraj and Rita Ganguli issued a statement on April 10, asking the citizens of the country to vote for the BJP or its allies.

This came in response to a statement issued on April 5, which over 600 artistes including Naseeruddin Shah, Ratna Pathak Shah and Anurag Kashyap jointly signed, urging citizens not to vote for the BJP or its allies in the upcoming elections. The BJP “has given free rein to Hindutva goons to indulge in the politics of hate and violence”, the statement said.

An ‘Artists Unite Against Hate’ march was held in Mumbai that had over 100 performers, artists, writers, actors, and directors from the city come together to convey that there is no place for hate in a democracy.

There were publicised individual endorsements as well. Kangana Ranaut termed Narendra Modi “the most deserving and the rightful leader of the democracy.” While Bollywood filmmaker Tigmanshu Dhulia said, “I am not a Modi fan, and it will be sad to see him as the PM” again.

What explains this need to share? The Citizen spoke to Richwik, a freelance political consultant, who told us the Hindi film industry has no ethics. “The recent interview of the PM by Akshay Kumar, we all know what it was. The film industry does it solely for money. If offered the same amount of money, Akshay would have taken a similar interview of Owaisi as well.”

On YouTube and at smaller venues meanwhile, several performers and comedians have been speaking against patriarchy and casteism, and the politics that promotes such practices. Kunal Kamra and Varun Grover are perhaps the best recognised.

Grover, a co-founder of the performance group Aisi Taisi Democracy, says it was conceived as a satirical political/musical act that would tell the truth about our times, crafted in the form of stories and songs. In their performances the group haven’t stopped at criticising practices, but have singled out and attacked the likes of Modi and Amit Shah. 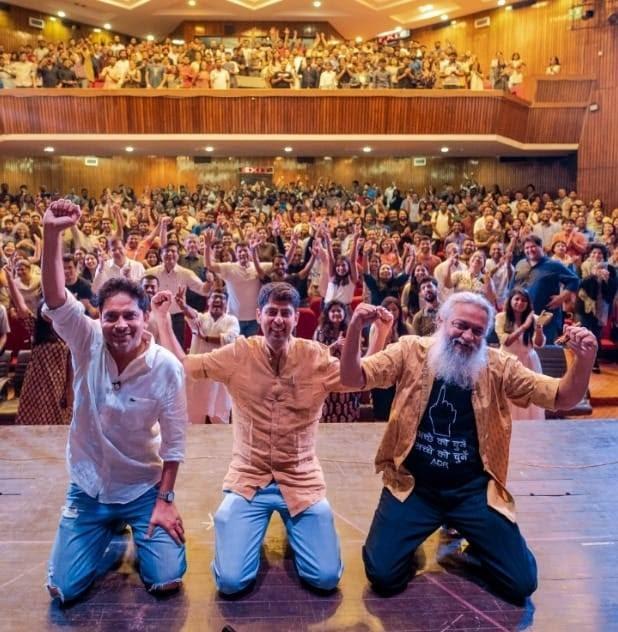 (Left to right) Sanjay Rajoura, Varun Grover and Rahul Ram of Aisi Taisi Democracy, at the end of one of their tours

Kamra, in his reply to a tweet sent out by Gautam Gambhir saying he was ashamed to have Kejriwal as his CM, said that he is “more ashamed to have a PM like Narendra Modi.”

Gaurav Tripathi, a performer who became popular through YouTube, believes that the reason everybody is coming out to talk about such issues is because we feel what is happening at present is dangerous. “I think some artists genuinely believe in their ideologies. Most of the artists align their ideologies in college times. Only now it's easier to assert them,” he told The Citizen.

Asked why he feels ideologies are easier to assert now, Tripathi said, “Do you think people should not speak casteism and communalism right now? I think any sane person would.”

The parties have made sure to have prominent voices rallying to their cause. The Samajwadi Party roped in Poonam Sinha, mother of Sonakshi Sinha and wife of Shatrugan Sinha, to fight from the Lucknow seat. The Congress is fielding Urmila Matondkar from Mumbai North. BJP MP Hema Malini, formerly known as the ‘dream girl’, is up for re-election and vouched in a widely shared video for the volume of work she has been done in her constituency - so much so that she doesn’t remember any of it.

Our star cricketers weren’t far behind in voicing their political opinions. Ravindra Jadeja tweeted “I support BJP. Jai Hind.” Virat Kohli, who made headlines with his statement that the people of India who like cricketers from any other nation should go live in that country, is thought to share camaraderie with the PM, in a reversal from his remarks against jingoism just a few years ago.

Gautam Gambhir recently joined the BJP and is its candidate from East Delhi, while Virender Sehwag has been sending out tweets on communal lines for quite some time now.

The involvement of influencers and celebrities was at the maximum throughout this election. Are more and more segments of our society being drawn into polarised, partisan camps, along the lines of election politics in the United States? Even as our politicians act increasingly like stars and godmen themselves?

Whether or not it was effective, and just which star-studded camp won the day, will become clear when the results come out on May 23.

This Coronavirus Wasn’t Made in a Lab—But Was it Leaked? 4 minutes ago

Puritanical Yes, But How Does Tablighi Jamaat Justify Media Baying for Blood?

The Time For Communicative Leadership: Lessons from Aotearoa

Both Governments Responsible for the Tablighi Jamaat Debacle