Saibal Mitra’s new film Chitrakar (The Last Mural) in Bengali brings in a whiff of fresh breeze in Indian cinema largely devoid of biopics on painters, sculptors and muralists. Like the subject of his film, Bijon Bose, who refuses to compromise with commerce, Mitra too refuses to bend down to commercial expectations from his feature films. He admits that Chitrakar mirrors his own frustrations with the monetary terms on which the film industry runs today because “it makes me question where we can call cinema an art or not.” Mitra succeeds in portraying the old and visually challenged artist Bijon Bose’s discontent with a mercenary society.

The character of Bijon Bose is brought out brilliantly by Dhritiman Chatterjee as the aged, blind man with a distinct tremor in his voice, moody, edgy, angry and irritable, who hates company and prefers to live and work alone which he really cannot because of his disability and his age. He has very introspective interactions with Death who appears in a black robe and a painted face. These are the only scenes that fail to rhyme with the sombre mood and honest treatment of the film with a touch of surrealism that does not belong. Yet, this throws up the perspective of the muralist in him while a major portion of the film presents the point of view of the other characters – the old retinue, the art gallery owner who packs off the young painter Tithi with an ulterior motive, and the dedicated student of the painter.

“I have worked with Dhritiman Chatterjee in my films Dronacharya and Sajarur Kanta. This film would have been impossible if he had refused to portray Bijon Bose. The character is loosely modelled around the original painter Binode Bihari Mukhopadhyay while Satyajit Ray’s documentary The Inner Eye on Mukhopadhyay was a ready frame of reference. It is also a tribute to the American painter Mark Rothko (1903-1970). His refusal to compromise to commerce was another inspiration for the story,” says Mitra who won the Bengali Film Journalist Association’s best director award for his short film, Dhakudar Katha (2000). Mitra has made four feature films, sixteen shorts and documentaries. Most of his films have been screened in festivals in India and aboard. But none of them have been commercially successful.

Why Rothko? The core of the narrative is inspired by a real incident in Rothko’s life. In the 1960s, Rothko began to use of darker colours like maroon, brown and black. Around this time, he received several commissions to do murals for large-scale public works. Among these was a group of murals for the Four Season’s Restaurant in New York’s Seagram Building which Rothko withdrew from subsequently. 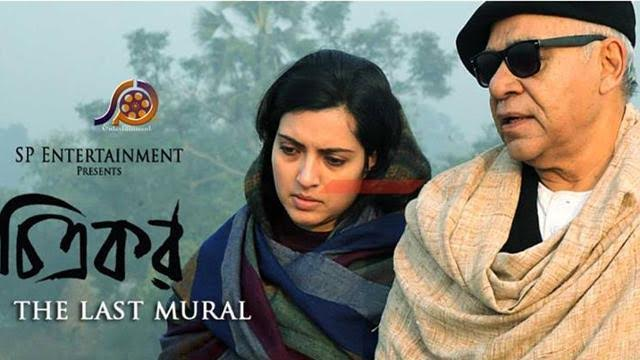 Bijon Bose is approached by Tithi, a young artist who is completely frustrated with her own works because they do not sell and is commissioned to go to a small place called Ekla (Alone) to help Bijon Bose create a mural for a new restaurant in Kolkata. Does Bijon agree to create the mural? The film then shifts to the sometimes harmonious and sometimes volatile exchanges between the old muralist and the young painter who are both artists but whose perceptions of art are distinctly different. Tithi feels she has begun to understand how this artist’s mind works but Bijon feels she does not understand anything, not art and not his art.

The entire process of painting, of creating a mural is fleshed out in precise audiovisual detail intercut with arguments, quarrels and music between the old man and the young woman. Bjion Bose begins by folding and cutting figures out of brown paper sheets to create figures of men and women for the huge mural and then uses these shapes as models with small pieces of mosaic tiles that are stuck to a large wall, one by one, till it takes a cohesive shape. Another beautiful piece of innovation by the director lies in that large water colour paintings of landscapes cover the entire screen and one can see some of the characters come alive within the painting and move on, which adds a surrealistic dimension.

“Through this film, I have tried to raise questions about how anyone and everyone during the post-modern era can become an artist, why do many of us state equivocally that art is dead, or, does an artist have the ability to create something that can really be called a work of art? Who does an artist create a work of art in the first place – does he create it to be sold in the market? Does he create it as his own way of self-expression or his beliefs in things that exist beyond art? Or, does he create art works for the common man out there?” asks an angry Mitra.

The art direction by Gautam Bose who created the mural and the other paintings for the film is spellbinding. Add to this Pandit Tejendra Narayan Majumdar’s musical score with a couple of Tagore songs and a lovely lyrical number (thumri?) that gives “the feel of the place where Binod Bihari Mukhopadhyay lived and worked, that is in Shantiniketan and he considered Tagore to be his guru and his mentor,” says Mitra. There are a couple of Tagore songs with one heavy Hindustani number (thumri?) that sets the ambience of the entire film.

Asoke Dasgupta’s cinematography captures the painterly quality of the outdoors juxtaposed against the darkness of the shady interiors where Bijon argues with Death and the brightness of the studio floor where brown paper sheets are being folded and cut and transferred onto colourful mosaic tiles to be pasted on the wide board across the wall. Arpita Chatterjee as Tithi, Arun Guhathakurta as Death, Debdoot Ghosh as the hep art gallery owner in Kolkata and Subhrajit Dutta as the disciple of Bijon fit into their characters quite convincingly. But the footage could have done with some sharp clipping because it is just too long.

This is just one side of the story. Another side that was brought across by Ray in his The Inner Eye explored the process of how an artist who is gradually and steadily losing his vision engage in a creative art form that is almost impossible to create without vision. Mitra explains it through small detailing. We see Bijon Bose seated at the break of dawn to watch the sunrise across the river. He tells his old retinue, “Just watch, the sun will now rise,” and his smiling old retinue says, “I do not think, Sir, that you have lost your entire vision.” Bijon smiles and the sun comes up.

In another scene, Tithi asks him why he has shifted from lighter colours for his art works to bright primary colours like red, blue and green and the old artist sarcastically says, “It seems you know everything but in reality, you know nothing.” One student of Bijon tells Tithi that she is really lucky that she is able to observe at first hand the creation of this beautiful mural from beginning to end. Tithi is frustrated when Bijon refuses to give away the mural to the restaurant and feels her long stay at the small bungalow with the old artist has been in vain. But she finds that the old man has left a handsome cheque for her for assisting him. This, ironically zeroes in on the film’s bottom line – for some artists, like Tithi, art is dead and is only for sale while for old artists like Bjion who is visually challenged, art is for the artist and for the work of art itself, to live on till eternity. But Tithi opens the cheque a bit wistfully, questioning whether her ideology has shifted now.

India’s Guest This Republic Day: “I Wouldn’t Rape Her Because She Doesn’t Deserve It” 13 hours ago

In Some Ways This is Anti-Politics