Lest We Forget, There is More to The Argumentative Indian Than the Censor Beeps

KOLKATA: The censorship imbroglio over asking beeps to be inserted in place of words like “cow”, “Gujarat” and “Hindutva” used by Amartya Sen by Pankaj Nihalani and team in Suman Ghosh’s documentary on Nobel Laureate Amartya Sen has effectively drowned any discussion, review, debate on the film itself.

This is a sad reflection on how prolonged emphasis on meaningless censorship squabbles can defeat the very purpose for which a film is made – to shed light on the life and times of Sen as a fine human being, as one of the greatest living economists in the world today, as a teacher and as an ideal speaker for more than five decades now.

He made news with his directorial debut, Podokhhep which won the National Award for the First Film of a Director. His second feature film was Dwando, his third was Nobel Chor and his fourth was Kadambari, a loosely structured, fictionalised account of Tagore’s relationship with his sister-in-law Kadambari. He also made a much appreciated and widely screened short feature called Shyamal Uncle Turns off the Lights. 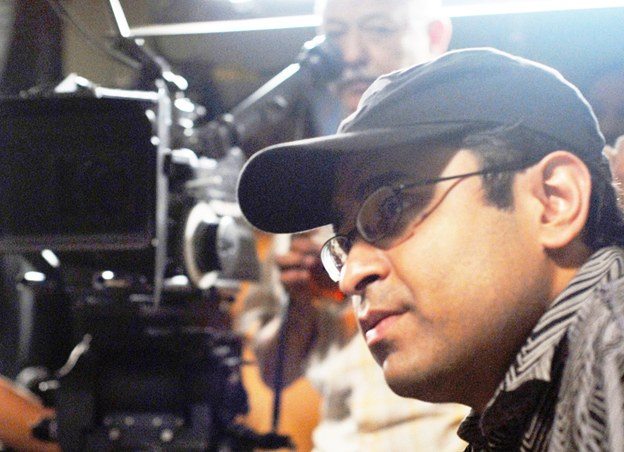 This is the first and till date, the only documentary that focusses entirely on the Nobel Laureate. The film is filled with the complex details of Sen’s Welfare Economics and Social Welfare Theory that fetched him the Nobel Prize in Economic Sciences in 1998 discussed mainly in a question-and-answer session with his former student Prof. Kaushik Basu, Professor of Economics at Cornell University and then Chief Economic Advisor to the Ministry of Finance, Government of India.

“It was Amartya Sen, the humanist, who motivated me towards the making of this film. The fact that I am an economist and an aspiring film maker at the same time gave me the confidence to take up such an ambitious and tough project. It took me two years to do the research while one entire year went into the shooting because the film features other Nobel Laureates, scholars, academicians who I could meet only after a long wait that stretched for months. But in the end, the project was worth waiting for. Besides, I needed to plan the structure of the film carefully,” says Ghosh.

The film made way back in 2002 could be screened in Kolkata first only in 2012. When asked why it took so long for the film to reach a Kolkata audience, Ghosh said, “Unfortunately in India documentaries are not viewed and telecast as much as in other parts of the world. So after I made the film when it was picked up by Icarus Films for distribution in North America I tried my best to reach out to the audience in India. It had some screenings in Delhi, Chennai and at Presidency College but I had no clue about how to get a market for documentaries. Fortunately now the scenario is a bit better.” He said this in 2012 but he certainly thinks differently now that the CBFC has stalled the theatrical release of the film in India.

The film has since been rechristened The Argumentative Indian after Sen’s path-breaking book. On June 27 this year, this documentary had its European premiere in London. The South Asia Centre teamed up with the Bagri Foundation London Indian Film Festival to present this fascinating documentary. It was again premiered in Nandan, Kolkata where Sen addressed a Q & A post screening. 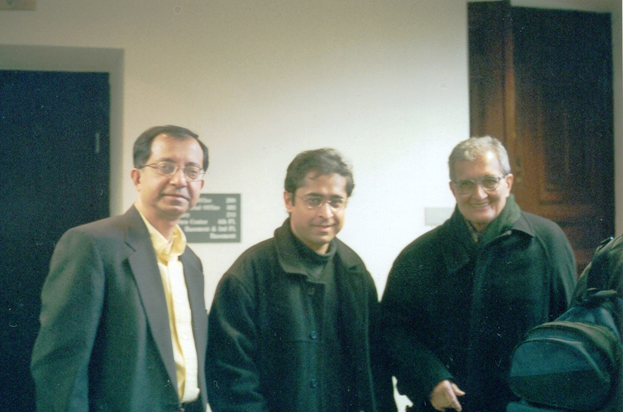 Ghosh blends the personal evolution of Amartya Sen and his theories as an Economist and Philosopher fluidly so that every member of the audience can relate to Sen’s evolution and teachings and carry something home with him to ponder over, to wonder about and to be influenced by. The film, shot over a year, spans the life story of Amartya Sen tracing his early boyhood in Manikganj in Bangladesh with his shift to Dhaka where his father was a professor and then to Santiniketan where he lived with his mother and maternal grandfather, Acharya Kshitimohan Sen, a close associate of Rabindranath Tagore and an authority on the philosophy of Hinduism.

An interesting comment came from Sen’s mother who said that when her son called up in 1998 to tell her that he had won the Nobel Prize for Economics, she simply said, “I don’t believe you,” making the audience laugh. Dhiresh Bhattacharya said, “Presidency College played a minimal part in his winning the Nobel Prize. Cambridge gave him a different language, a different way of thinking and a different approach to the subject.” Ghosh’s film also carries excerpts of interviews with PM Manmohan Singh.

“It is difficult to capture the depth and breadth of his scholarship in a small documentary with a running time of less than an hour. While I was making the film, one line from what Prime Minister Manmohan Singh said about him when I interviewed him arose in my mind. He said, “This man is a puzzle to me,” and I tend to agree with him,” says Ghosh. Sen talks about his shift to Santiniketan where he says, “I loved the open air and the general air of freedom it had.” 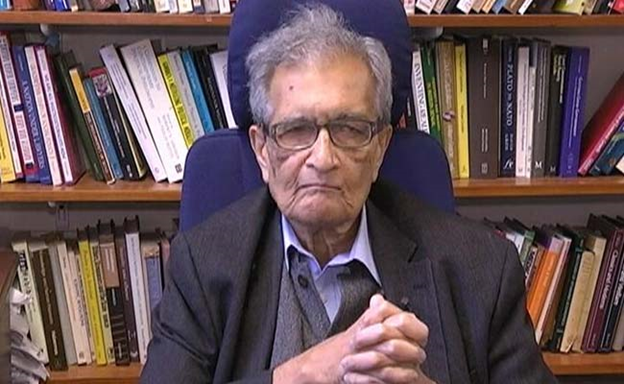 Many of us were not aware of one significant fact which comes across in this film. Sen was diagnosed with cancer soon after his 18th birthday. “I detected a swelling in my mouth, a nodule in my palette,” which the first doctor he visited could not detect. The experts at Medical College Hospital advised that it be cut off immediately he rightly did not listen to. A medical student who was his hostel room-mate said it might be carcinoma. Sen began to read on his illness and diagnosed his condition accurately proved by a biopsy conducted at the Chittaranjan Cancer Hospital.

“This self-diagnosis was very significant because I had diagnosed my illness only on the basis of my reading. I was seeing myself more as an agent than as a patient. For one year, I had to undergo radiation. It was unknown then because the Hiroshima bombing was just eight years old and few were aware of the effects of radiation then. It was a time for reviewing one’s vanity. It was a challenge I had to face. I had a kind of aggressiveness about it which was important for me,” says Sen. He adds that he was given five years to live and more than five decades later, he is still alive.

The camera scans the vast geographical canvas of Sen’s world opening with his teaching a class at a University abroad, panning to capture the statue of Mahatma Gandhi, through the open fields of Santiniketan touching two little boys running across the fields, to the Ashrama at Santiniketan and across the murals on the walls to a brief glimpse into Pratichi.

There are scenes of College Street along Presidency College, shots of Sen walking down the green fields of Trinity College near Cam Lake, Cambridge as the camera meanders across figures of Alfred Lord Tennyson, Francis Bacon and so on capturing the essence of his nostalgic account of the beginning of his stint as Master at Trinity College which he served from 1998 to 2004. The film has touches of his sense of dry, British humour.

“There is a lot of romanticism associated with Sen's work in Economics and Philosophy which I thought needed to be elucidated. For example, as Sen mentions in the film, Social Choice theory and Welfare economics for which he got the Nobel is very technical. But Sen tries to water it down as much as possible. I agree that even then it might be inaccessible to a lot of people. I have carefully tried to balance the film with other topics such as his mother's reaction when she hears about the announcement of the prize from Sen himself or his battle with cancer at an early stage of his life which should be palatable to one and all,” Ghosh explains.

Shirsha Ray was in charge of the cinematography at the India end. Slawomir Grundberg and Jason Longo were the UK and US camera persons. Jason also did the editing. Strains of a Tagore song float across the soundtrack during the camera’s wanderings at Santiniketan. The film closes with an off-screen recitationby Victor Bannerjee of “where the mind is without fear and the head is held high” from Tagore’s Gitanjali.

“It was intentional to use Tagore minimally as it would be aesthetically reiterating the obvious. Rather, I use a lot of Western Classical music - pieces by Beethoven, Mozart and Haydn- since that captures the essence of the man. Amartya Sen is a confluence of the West and the East....the choice of music alludes to that,” Ghosh sums up. “Interacting with Amartya Sen at such close quarters,” he adds, “helped me to be a better person. His penchant for knowledge and curiosity towards a lot of things in the world is infectious and I have tried to imbibe whatever little I could from him.”

According to latest reports, Sen has put his foot down very firmly on the CBFC’s direction to ‘beep’ these words and Ghosh says he will release it on the Net and no arguments please!