Lurking around every corner are the haters…the critics…the cynics…all waiting to pounce. They will always have a reason or two or more to judge you. It’s simple: it just doesn’t matter how you choose to live your life — whether you build a business or work a corporate job; have children or choose not to have children; travel the world or live in the same town all of your life; go to the gym 7 times a week or sit on the couch every night — whatever you do, the hidden detractors are there…waiting…and hungry to use you as bait!

This is something you have to deal with yourself. There’s no one else that can fill in your shoes at such a time. For one reason or another, someone will find a reason to project their insecurities, their negativity, and their fears onto you and your life – that unfortunately is how it is. With that in mind, it is easier to talk about being judged and criticized.

Here goes: Surprise! Surprise! The biggest critic in your life is none other than you. It's easier to complain about the outside critics, but the biggest critic in your life usually lives between your own two ears. Working up the courage to move past your own vulnerability and uncertainty is often the greatest challenge you’ll face on the way to achieving your goals.

When I started as a freelancer, it wasn't the criticism from outsiders that held me back. It was my own mind worrying that people would think I was the underdog because I left my ‘real job’ to ‘pursue my passion’. 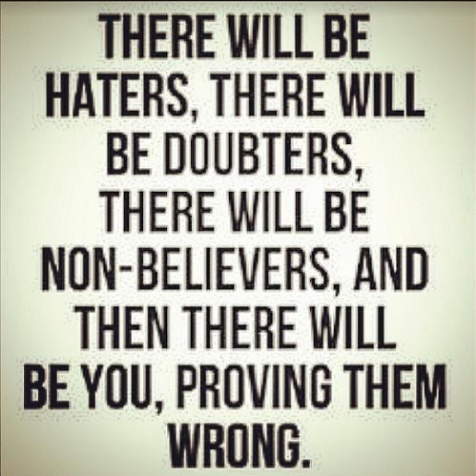 When I started writing, it wasn't the hurtful comments from readers that prevented me from getting started. It was my own fears about what they would think if I wrote about the things I cared about and what was closest to my heart.

Those are examples of the types of internal fears and criticism that so often prevent us from getting started on our goals. It can take a lifetime to learn that just because people criticize you it does not mean they really care about your choice to do something different. Usually, the haters simply criticize and move on. And that means that you can safely ignore them and continue doing your thing.

But that is easier said than done because we all like to be validated. Some people like it more than others, but everyone wants to be respected and appreciated to some degree. I certainly do. I know that when I chose to take a risk and share my writings with the world, at first I did wonder about what my friends and family would think and how the people around me would see me because of that choice. Would this help my quest to write about what I see, what I believe in and what I stand up for? Would this hurt my reputation? Should I even be worrying about my reputation?

Especially with writing, these questions created an internal struggle for me. On one hand, I believed in myself and I knew that I wanted to contribute something to the world around me. But on the other hand, I was worried that people wouldn’t approve of my work and would criticize me when I started sharing the things I cared about or believed – women’s rights/freedom of speech/religious tolerance/the right to live life the way you want etc.

You can either be judged because you created something or ignored because you left your greatness inside of you. Eventually, I decided that it was more important to contribute something to the world than it was to protect myself from criticism. The truth about criticism is that it’s almost always in your head.

Even though the vast majority of readers are mostly positive or neutral about my work, the critics are still heard loud and clear. The tendency to hold onto negative criticism is natural as we remember negative emotions much more strongly and in more vivid detail. I now believe that hate mail means I am doing a good job in getting feathers ruffled and making people defensive – as I am closer to nailing the truth than before. What I don’t like is when people start ignoring your work entirely and make judgments about you as a person instead.

And that brings me to the main point: it doesn’t matter what you do, there will always be someone who finds fault in it. You need to focus on the road in front of you. If you look at the side, then you’ll end up hitting it. The same could be said for your life, your work, and dealing with critics. Criticism and negativity from other people is like a wall. And if you focus on it, then you’ll run right into it. You’ll get blocked by negative emotions, anger, and self-doubt. Your mind will go where your attention is focused. Criticism and negativity don’t prevent you from reaching the finish line, but they can certainly distract you from it.

This is my preferred approach to criticism. When someone dishes out a negative comment, I use that as a signal to recommit to my work and to refocus on the road ahead. Some people are determined to take things personally and tear down the work of others. Life is too short to worry about pleasing those people.

First and foremost, don’t be the hater. Don’t be the person who tears down someone else's hard work. Rather than beating the haters back with insults, win them back with sincerity. Most people don’t want to be convinced that your work is wonderful; they just want to know that you care. The world needs more people who contribute their gifts and share their work and ideas. Working up the courage to do that can be tough. Support the people who display that courage.

If you're dealing with criticism, then don't let the wall keep you from seeing the road. Focus on the path ahead. Finally, and most importantly, make the choices that are right for you. People will criticize you either way!

Periods, Pads and a Pandemic: Promoting Menstrual Hygiene in India 7 hours ago