A Multitude of Voices Mark 100 Years of Jallianwala Bagh Massacre

Jallianwala Bagh: Literary Responses in Prose and Poetry is a collection of voices put together in a single volume by editor Rakhshanda Jalil. The writings take a powerful stand against the Dyers of yesteryears and the Dyers of today as the world refuses to forget the Jallianwala massacre of innocent people a hundred years ago.

Brigadier-General Reginald Edward Harry Dyer, it may be recalled was commander 45th Infantry Brigade at Jalandhar when he was called to Amritsar on 11 April, 1919. Amritsar was tense. In an exhaustive introduction to the book, Jalil gives a list of events that eventually led to the Jallianwala Bagh killings on 13 April, 1919 on orders of Dyer.

Punjab, bastion of the British strength in India from where came not only the richest grain for the white sahibs and memsahibs but the finest fighting men of the Indian army. Now Punjab was up in arms against the Rowlatt Act passed in March 1919 by the British government allowing political cases to be tried without jury, and imprisonment of suspects without trial.

Gandhi was furious. He called for a satyagraha against the draconian Rowlatt Act that restricted freedom of expression and strengthened police powers. Gandhi Ji was arrested and barred from entering Punjab and all meetings and public gatherings were forbidden. Congress leaders Dr. Satyapal and Dr. Saifuddin Kitchlew were deported out of Amritsar, making their followers angry.

On April 13 a large number of people, mostly Sikhs, had poured into the city from surrounding villages to celebrate the Spring festival of Baisakhi. Local leaders called upon people to meet in the Jallianwala Bagh to pass a resolution against the Rowlatt Act. Around 20,000 people collected. Dyer arrived with 50 riflemen and two armored cars with machine guns and opened fire on the unarmed crowd including women and children without warning. Within 20 minutes over a 1,000 civilians were killed and many more wounded.

The protests that followed had frightened the British who were reminded of the first war of independence fought against the colonialists in 1857. Rabindranath Tagore returned his British Knighthood. The city echoed with cries of Gandhi Ji ki jai, Hindu Muslim ki Jai, Down with Rowlatt Bill.

The Hunter Committee finally held Dyer guilty of a mistaken notion of duty. He was relieved of his command and prematurely retired from the army after he confessed to the Committee that he felt it was his duty to fire on the crowd.

“I think it quite possible that I could have dispersed the crowd without firing but they would have come back again and laughed, and I would have made, what I consider, a fool of myself.”

During the interrogation, Dyer said that he wanted to create an impression on all of Punjab and therefore his order to open fire, making Zafar Ali Khan, father of Urdu journalism write in verse:

Go and live in the jail and eat arhar dal, you too must enjoy the hospitality of the sarkar, and then say that martial law remain in effect for ever, or else you too will become a denier of General Dyer.

The horrific act by Dyer is described as one that added a sixth river of the blood of Hindus, Muslims, Sikh women and children to the five rivers of Punjab. It remains etched in the collective memory of society to this day. Ever since, generations have continued to wonder what kind of a human being does, what Dyer did.

In an extract from The Crown and the Loincloth, Chaman Nahal, novelist and Professor of English who died in 2013 tries to imagine what Dyer might have been thinking? How much hatred did Dyer nurse against Indians before he gunned down so many of them in cold blood?

If anything that Dyer hated the most in this land, even more then its climate and the slimy creatures that dwelt in it was the way the Indian towns were built. He didn’t know whether it was by design or accident. Yet each town without exception was a web of intricate narrow alleys and alleyways, impenetrable by anyone except those fully acquainted with the pattern.

Just before the massacre, Dyer is imagined strolling through the Bagh. He had never been more happy in his life. He had known India for 55 years and always found it to be treacherous. Its people. Its landscape. Its seasons and climate. Its cities-yes, its cities especially.

Dyer was born in the cool and protected town of Murree, nestling in the hills. Yet he could not stay protected for long. Soon he was exposed to the heat of the plains and the desert sand. It was the very incarnation of cruelty, that heat. His young mind could think of nothing in the muddle, and the relief of a few years in England for education was no relief really; he was back to make his career in the same muddle. And these slimy Indians who could bear that heat stoically enough…they made him throw up.

Dyer often thought back of the days when the supreme authority or protecting the Raj was vested only in an army General. Like Clive. Or Warren Hastings. A civilian by definition could function only in a law abiding community and these Indians, by what stretch of imagination could you call them law abiding? They had scheming, plotting minds which could only come up with irritants. The civil authority was incompetent to cope with rebels; the army alone could do that.

Navtej Singh’s contribution is a gut wrenching story written originally in Punjabi about a tired reporter attending a state function at the Jallianwala Bagh. The scribe is half a asleep and imagines that the audience and speakers of the day are those massacred in 1919 and who have woken up to tell their respective story one at a time.

I am a mother and I have countless daughters. My daughters dwell in several villages and towns of Hindustan, in fact, they are everywhere. Jallianwala Bagh, my daughters in these villages have been forced to lie naked with the fathers and brothers of the Dyers of today. Their salwars have been stuffed with leeches and crushed chillies. They have been stripped naked for the debauchery of the police and the soldiers.

Jallianwala Bagh: Literary Responses in Prose and Poetry introduced and edited by Rakhshanda Jalil is published by Niyogi Books, 2019 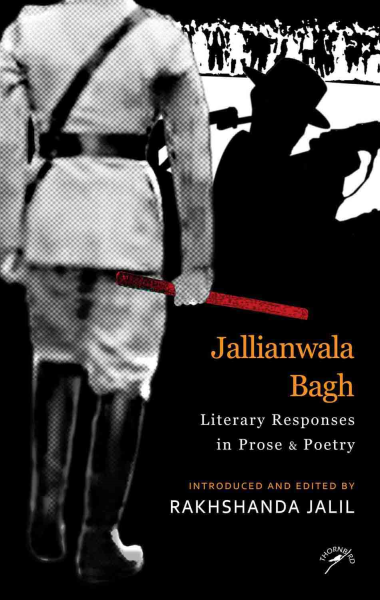 The Term ‘Migrant Worker’ as Territorial Barrier 16 hours ago

A Confession of Corrections to Guru Dutt 16 hours ago

Qila Mubarak Patiala, On the Verge of Reclaiming Lost Glory 17 hours ago

Literature and Epidemics: In Death, Some Geniuses Sang of Life

Poet of a Shared Paranoia

Backstage by Montek Ahluwalia, A Book that Won’t Ask Why