Every evening as the sun goes down in the month of Ramzan, many Dilliwallahs are drawn to the Muslim dominated areas of the city. Those who dream of perfect kebabs, rich mutton korma, delectable phirni and the likes, end up at Matia Mahal, the de facto centre of Mughalia cuisine in the city.

The plan is to partake in the iftari feast and in the bargain, get a whiff of Ramzan festivities too. To have this experience they are ready to sweat it out, rather profusely, in the narrow lanes and among a jostling crowd. 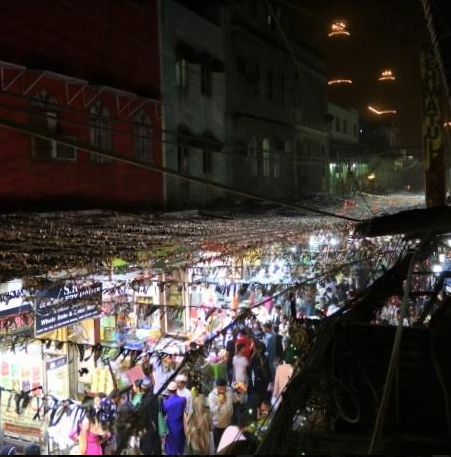 But first, it has to be made clear that the right word to describe the cuisine we are talking about is the Mughalia cuisine and not the prevalent usage of the term as Mughlai cuisine. As per the well-accepted authority on Indian cuisine, Sohail Hashmi, there is no such thing as Mughlai food. The correct usage as per him is Mughalia cuisine. And we have no reason to dispute that.

The remnants of the famed Mughalia cuisine still survive in some form in the Old Delhi. What started as a pure indulgence of the Mughal emperors and nobles, and attained the levels of almost an art form, has continued in Old Delhi even though the Mughals have long gone. Matia Mahal presents a window to that rich culinary past. 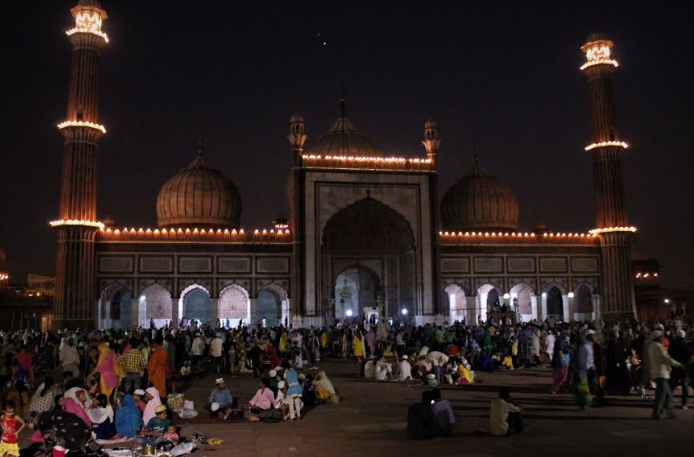 Matia Mahal, near Jama Masjid, is a narrow, busy, congested and quintessential Old Delhi street which hides within its folds, nooks and corners, the glimpses of Delhi’s culinary regal past.

A well-spent culinary evening here would include an assortment of kebabs, curries, sweet savouries and much more the street has to offer. 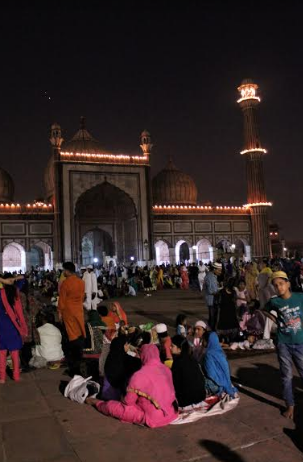 Matia Mahal literally means market of the earth colour palace. The palace though is no longer traceable today. Instead, there is a street lined with shops selling all sort of things besides food. For the month of Ramazan, the street adorns a festive look. 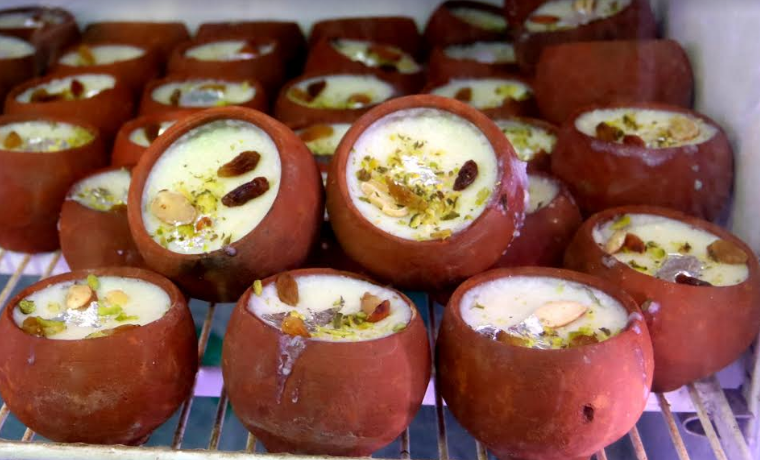 The street Matia Mahal starts just opposite from the Jama Masjid’s Gate number 1. Your culinary journey would start the moment you step anywhere close to the mouth of the street. Amidst the jostling crowd of shoppers, beggars and stream of people venturing into and out of the street you will spot a few kebab stalls on your right. You are now at the mouth of the famous food street.

Warning: things can get a bit too crowded and thus uncomfortable here in the evenings, especially during the month of Ramazan. Also, the street floor is far from clean and could be a sort of a culture shock for the uninitiated. The beggars too can be a persistent irritant. The best policy would be to not indulge them. If you want to do your bit for the poor, which you would come across in big numbers in the street, then the thing to do is to buy food coupons from the restaurants in the street. You will notice a lot of poor people squatting next to the restaurants. These are the people waiting for the visitors to buy food coupons from the restaurants who would then feed these poor. 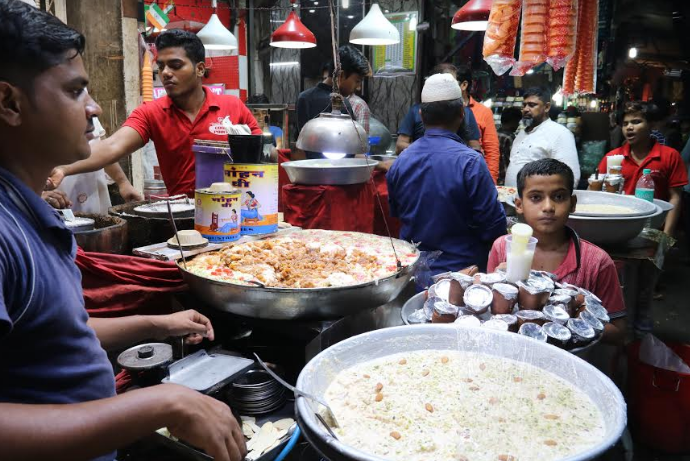 There are many eateries here, from the famous to the nameless.

Just after the famous Kallan Sweet shop, which specializes in keema samosa, on your left, as you enter Matia Mahal, you will spot the famous Karim’s and just next to it (and if seasoned connoisseurs are to be believed, it is much better than Karim’s) Al Jawahar. Al Jawahar has now separated into two different outlets, located next to each other. 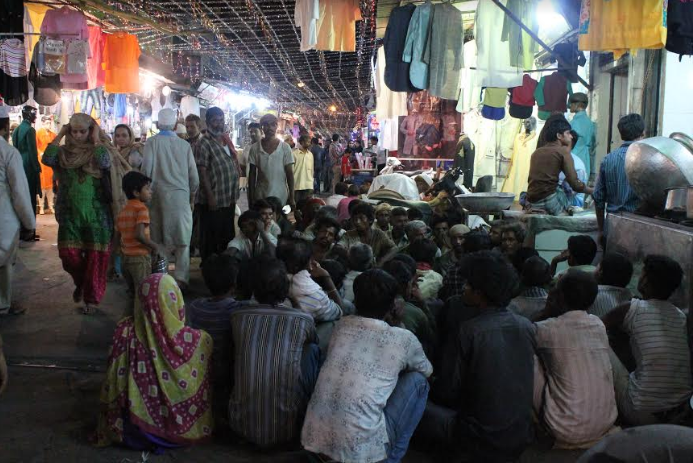 These are the two big places that offer the best of Mughalia cuisine in Delhi. Karim’s is a few steps inside a lane. You will see the deghs displayed on a platform with a chef pulling out food from it on to plates which are then ferried by men to one of the three sitting areas around, where food lovers wait to dip their pieces of khameeri rotis in the curries. It is very atmospheric.

Karim’s and Al Jawahar, are famous for the curries such as Mutton Korma, Mutton Stew (pronounced as ishtu, and inspired by the British stew), Mutton Aloo and Nihari. This rich fare is to be consumed with Khameeri roti (bread). They also do a to-die-for mutton burra and an acceptable biryani. One can also order the roasted raan, which is a complete leg of lamb done in a tandoor. 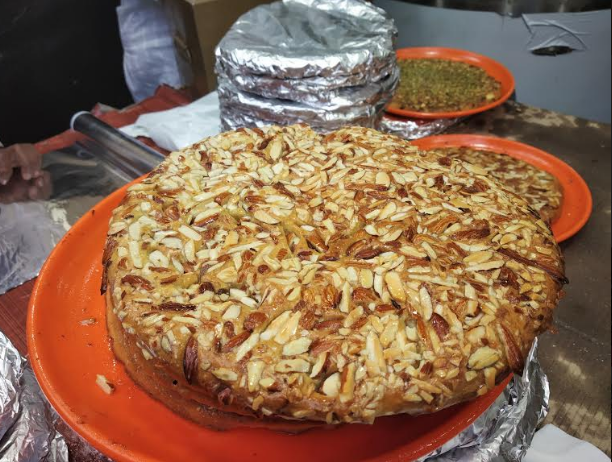 Importantly the Matia Mahal also has much more to offer in terms of food beyond the two old institutions of Karim’s and Al Jawahar.

Let us explore further and get into tikkas, seekh kebabs, fried chicken and much more. 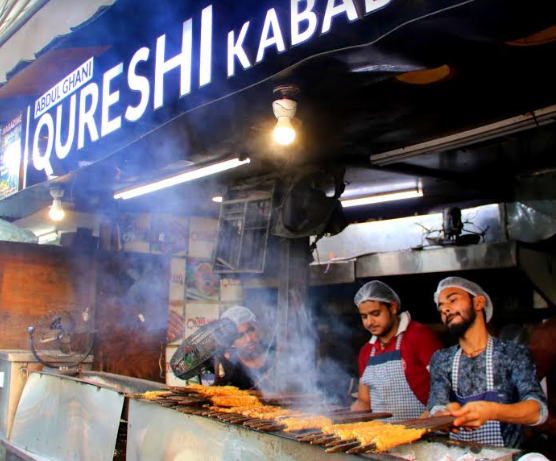 As the evening sets in, a number of Kebab stalls come up in Matia Mahal. Most do justice to the kebabs. But when it comes to kebabs the outlet that draws the most food lovers is the Qureshi Kebab Corner. If you manage to jostle your way to the cash counter and place your order, then they will serve you excellent steaming seekh Kebabs or tikkas sprinkled with sauce and onions. You will see most people stand and eat their portions of kebabs right at the shop though Qureshi’s have started a sit-down dining room a little inside the lane next to the shop. The Qureshi kebabs corner is located on the main road leading to Matia Mahal, near Jama Masjid Gate number 1, if you are coming from Daryaganj.

A bit further down the street is a small joint (located next to a bakery shop) which gives a new meaning to a famous preparation called ‘butter chicken.’ The ‘butter chicken’ (roasted chicken pieces in a tomato based gravy) a famous invention of the North Indian Punjabi’s or by some accounts, the invention of the Indian restaurants in London, gets a new meaning here. 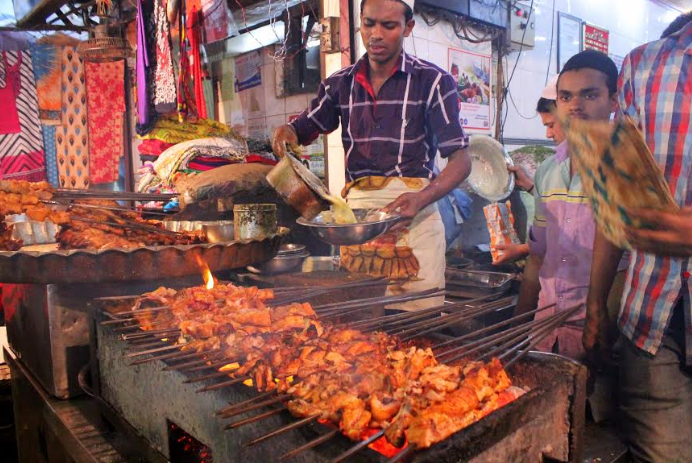 Just watching the liberal and no holds bar use of butter in the preparation is enough to give you a heart attack. And you can actually see the whole thing being prepared as it is done on the street-side stalls set up in front of the shop in full public view. The guy roasts the chicken pieces over burning coal, simultaneously melting a huge piece of butter in another pan next to chicken pieces. Then he pours the melted butter over the roasted chicken, puts some special sauces over it, mixes it thoroughly and serves it to you.

The sweet side of it

On your right just past Karim’s area number of small outlets (all call themselves Cool Point) which sell traditional desserts such as Shahi Tukda and Pheerni (a traditional preparation of rice and milk). Just opposite the Phirni stalls is a shop selling mawa jalebi, a speciality from Burhanpur (MP). It looks like a deep reddish-brown jalebi and tastes somewhat like the good old gulab jamun. Definitely worth a try.

A few shops down the road on the right is the newly opened shop selling a rich sweet bread (a variant of traditional sheermal) from Meerut (UP). Covered with a rich layer of dry fruits, it demands a strong heart to deal with.

There are a couple of bakeries too selling buns, rusk and special breads, which are available here only, such as sheermal and bakarkhani. Sheermal is a flat bread looking like a tandoori roti, but it is a bit sweet. You never eat a sheermal with korma. It is appreciated as it is, with no accompaniments.

Further down the street you will come across a fork in the street. Take the one on your left. This is the Chitli Qabar area. Past a few shops here on your right is another famous shop called Sheeren Bhawan. Though you will come across a number of stalls selling sevaiyan, which come up especially during Ramzan, as you enter the Matia Mahal, Sheeren Bhawan offers the best lot.

It is famous for selling sevaiyan (vermicelli) and other such sweetened traditional snacks (like Khajla) which are to be consumed with milk. Further down the road, you will come to another sweet shop that is famous for its keema samosas (mince meat patties). This is the Ameer Sweet Shop. They also have excellent jalebis.

The whiff of perfect Biryani

If you are interested in Biryani, then ask here for Mhd. Toufiq Manpasand Biryani. You will be directed to a small kiosk further down a narrow lane which sells very good biryani. The Biryani they sell is the famous achaari Biryani which they claim to have invented.

Besides the above mentioned there are numerous other roadside kebabs, fried chicken and phirni makers here who also need to be appreciated by the food lover visiting here. The food fare becomes richer during ramazan days with many sevaiyan and kebab stalls coming up.

The best way to reach the place is to find Gate Number 1 of Jama Masjid. Jama Masjid is the most prominent Old Delhi landmark. I would advise you to take the Delhi Metro Train to reach the place. There are two options here. One, reach the Chawri Bazar metro station on the yellow line and from there take a rickshaw to Matia Mahal. The second option is to take the relatively new Red Fort line that operates between Kendriya Terminal and Kashmere Gate and get off at Jama Masjid station from where Matia Mahal is at a five minutes walking distance. 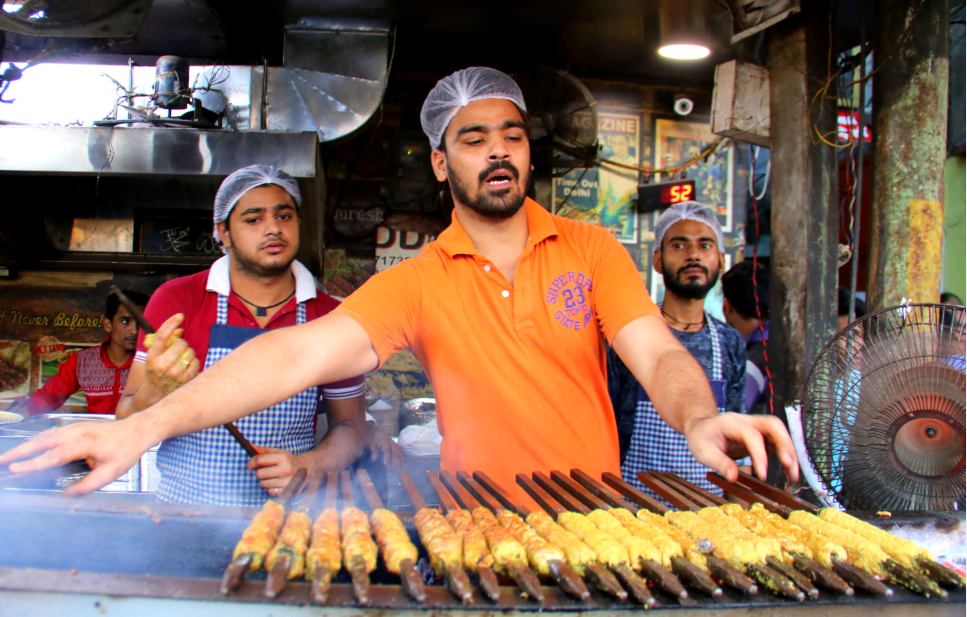