Farmer-Government Talks : A Sliver of Hope

Focus on repeal of laws

NEW DELHI: For the first time in the seven rounds of talks with the farmers on January 4. 2020 the government was not rigid in insisting it will not repeal the laws. The Ministers leading the talks reserved comments about the laws to vague assertions rather than the firm ‘no question of it’ stance taken in all the previous meetings between the government and the representatives of the 40 farmer organisations.

This has opened the window slightly, more as the farmer leaders said that they will return for the meeting on January 8 only if the government was prepared to discuss the repeal of the three controversial laws. “Otherwise there is no need to call us for the next meeting,” the kisan leaders said. The Ministers after brief consultations amongst themselves, fixed January 8 for the talks.

The farmers organisations have decided to focus on the repeal and take up the other issues, including MSP, after this is done. This strategy was evident in the talks on Monday, with the leaders refusing to discuss any other issue except the repeal of the three farm laws. This will continue as the strategy for the next round as well, as the organisations representing the farmers are now in no mood to be distracted by the smaller issues while the larger one is hanging fire.

The pressure on the government is increasing by the day. Also the groundswell of support has also ensured rare unity amongst all the farmer organisations with leaders asserting, “we are all on the same page, all totally and completely united.” One senior leader smiled, “if anyone now dares move away he will be politically lynched by the people, so unity will remain intact.”

As the support is increasing dramatically by the day. What appeared to be a Haryana and Punjab movement has moved into western Uttar Pradesh, Rajasthan, Madhya Pradesh, Maharashtra from where farmers have physically joined the lakhs camping around Delhi’s borders. Huge rallies are being held on a daily basis in all other states including Bihar and West Bengal with south Indian states coming out in full support with two week long dharnas, huge meetings, and statements in support of the farmers braving the bitter cold in Delhi.

The farmers of Andhra Pradesh, Karnataka, Tamil Nadu, Kerala are all on board with the farmers and the protest that is showing no signs of abating, with the numbers only increasing, despite the rain, and the death of at least 60 farmers at the protest venues. The farmers struggle has ignited the imagination of the people, with empathy and support pouring in through songs, statements, speeches. And the government being roundly criticised for being ‘heartless’ and ignoring the plight of the kisans suffering silently in the cold and rain.

Interestingly, the spirit of the farmers is not down with the highways replete with langars and hot cups of tea for all who pass by. Travellers from Chandigarh to Delhi are stopped by farmers offering them tea and food, and when they refuse they are told they just have to partake of the fruit, with bananas being thrust into the cars. The generosity of spirt has brought warmth to the protest, that has turned the protest sites into a swirl of united, passionate humanity. Not in hundreds but in the lakhs.

As the farmers said, if they can survive this winter cold and the rain, it will only become easier weather wise as the days pass. All are now speaking of the march to Delhi on January 26, pointing out that “Republic Day is for the people, and we are the people.” The government is running out of options in the face of this firmness, unable to use violence except to stop more farmers from joining those already at the borders. There is anger about the tear gas used on farmers trying to enter Delhi, but instead of scraping the crowds away this high handedness is visibly adding to the farmers determination to stay put.

Divisions within the farmers would have emboldened the government but this solidarity is showing no chinks. Significantly during the talks the government said that there were organisations that supported the laws to which the farmer leaders present demanded they be named and identified. The matter was dropped for the time being. There is some hope in the air of a favourable resolution, but all involved are treading very cautiously.

Cover Photograph: Farmers refuse to eat lunch offered by the government, have their own food at Vigyan Bhawan. 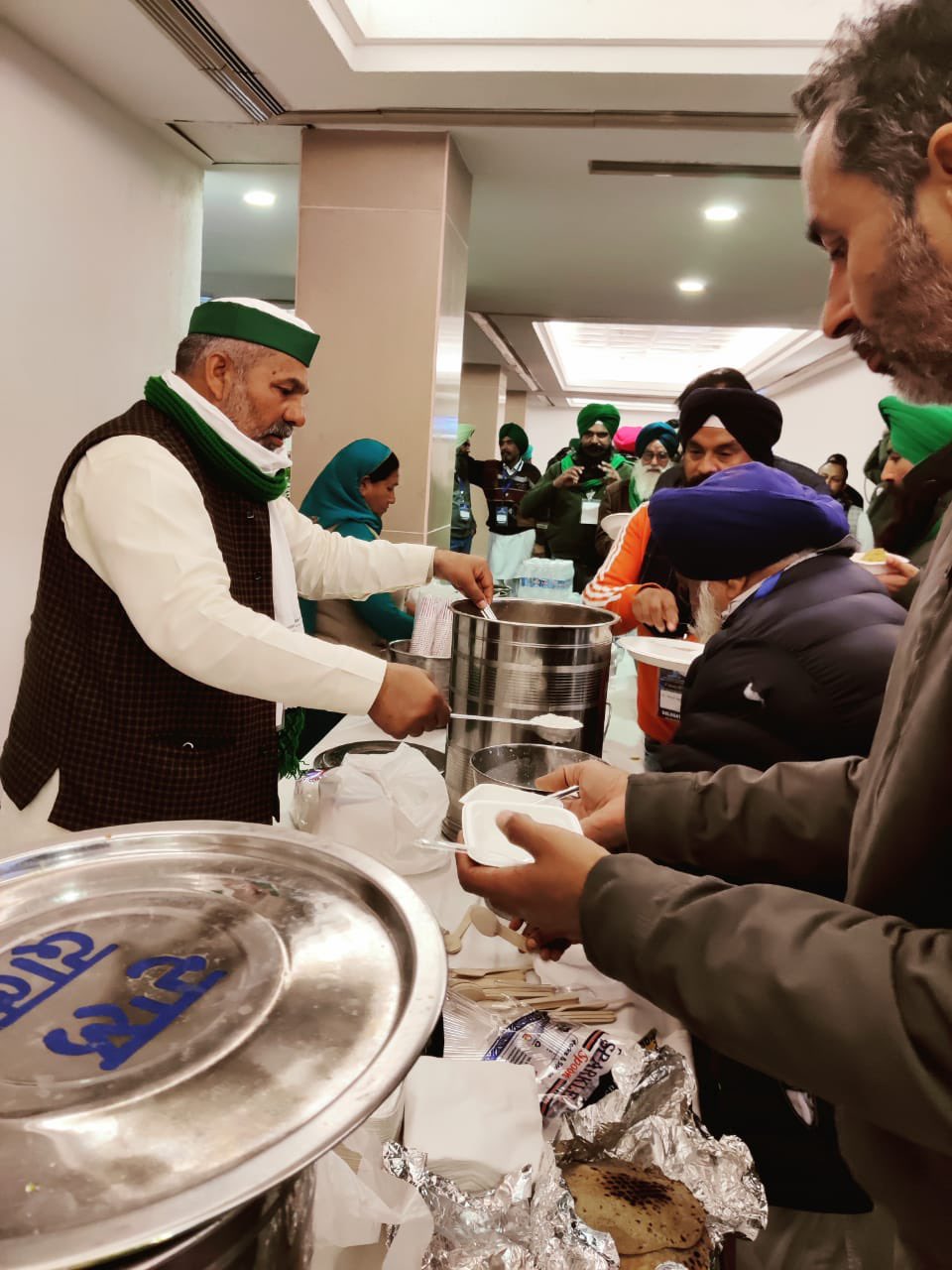