Internationalising the issue keeps the government on the defensive

Many non-resident Indians have organic links with Indian Punjab. Most Punjabi NRIs are Sikhs from rural areas with agrarian roots now settled in countries like the USA, UK, Canada, Australia. Many also live in the Arab countries, Europe and east Asia.

Punjabis began migrating to the western world and east of India from the late 19th century. The “opening of the west” to Asian migration in the 1960s and the Gulf oil boom of the early 70s led a fresh spurt of migrations.

This trickle has now become a virtual deluge. The opening of foreign universities especially in Canada, Australia, New Zealand has ensured massive migration of educated youth to these countries. Less educated, less wealthy youngsters are moving to Saudi Arabia, the UAE, Greece, Italy, the Philippines.

Initially confined to Doaba and parts of Ludhiana and the Moga district in Malwa, emigration is now a pan Punjab phenomenon. There is hardly a village or mohalla in Punjab which does not have an NRI today.

Punjabi Sikhs have a visible, organised and vociferous presence in Europe and North America. The events of 1984 have led to a more assertive Sikh identity. Organised around gurdwaras and sewa (service), Sikh institutions like langar (free community kitchens) are well regarded for their selfless service in the western world.

Sikhs have also been active in local politics rising to high positions: Harjit Singh Sajjan is defence minister in the Canadian government while Jagmeet Singh heads the opposition New Democratic party in Canada. Many Sikh and Punjabi origin MPs and local politicians have come up in the western world, giving the local Sikhs voice and weight in their societies.

NRIs have kept up continuous interest and connections with Punjab. Their investments, remittances, donations and tourism have played a big role in the prosperity of Punjab providing extra income to their families back home. Many have also played an active part in charity and village development.

They have also taken deep interest in the politics of Punjab right from the days of the Ghadar Party. This interest ranges from sarpanch elections in their native villages to national level politics. It has included support to the radical Simranjit Singh Mann in the 90s, and the pro NRI party of Balwant Singh Ramoowalia at the turn of the century.

In the last 10 years NRIs have in large number supported outfits advocating political change, first PPP and then AAP in the state. The revolution in communications ranging from cheap airfares, internet connectivity, social media and digital media channels have ensured that Punjab and its diaspora are better connected than ever before.

Interest and support for the farmers’ movement was steadily building up among the NRIs as in Punjab. Most rural NRIs have agricultural lands in Punjab and see the three “black laws” as threatening their incomes and land wealth. Moreover they see this assault by the Modi government as a threat to their existence and “hond”.

Diaspora support reached a crescendo after November 26 as live images of youth and farmers breaking barricades at Shambhu and many other places during their Delhi Chalo campaign were beamed to their homes, trucks and businesses.

The courage, grit, sacrifice and dignity shown by farmer agitators struck the deepest emotional chords of Punjabis the world over. This ensured that almost the whole Punjabi NRI community came out in support of the agitators.

Demonstrations in front of Indian embassies, protests in public parks and streets, and car rallies have taken place in more than 50 locations the world over including Vancouver, Toronto, California, New York, London, Melbourne.

This resulted in widespread coverage by the international media. NRI pressure and lobbying led to support being extended by Canadian PM Justin Trudeau, UN Secretary-General Antonio Guterres, US incoming Vice-President Kamala Harris, MPs in the UK and many more.

NRI organisations like Khalsa Aid, the Sikh Council of New Zealand and individuals have come forward in large number to provide donations, sewa, langar, books, blankets, medicines and more to the protestors at Singhu, Tikri, Ghajipur and Shahjahanpur.

NRIs have also been motivating and sponsoring people from their villages to reach Delhi in large numbers. The participation of students and second-generation NRIs in this movement has broadened the extent, depth and scope of NRI support.

Aggressive, assertive and articulate young activists have been at the forefront of agitations and mobilsation, and social media campaigns on various platforms. They are playing an important role in creating awareness, spreading the message and countering rival propaganda.

NRI support has been crucial during these farm agitations. It has not only made the movement more potent by providing material, moral, managerial and manual support, but ensured the Government of India remains on the defensive by internationalising the issue.

In the longer term a common struggle will likely strengthen the already strong bonds between “native” and “foreign” Punjabis, and help young NRIs stay connected with their roots like their forefathers before them. 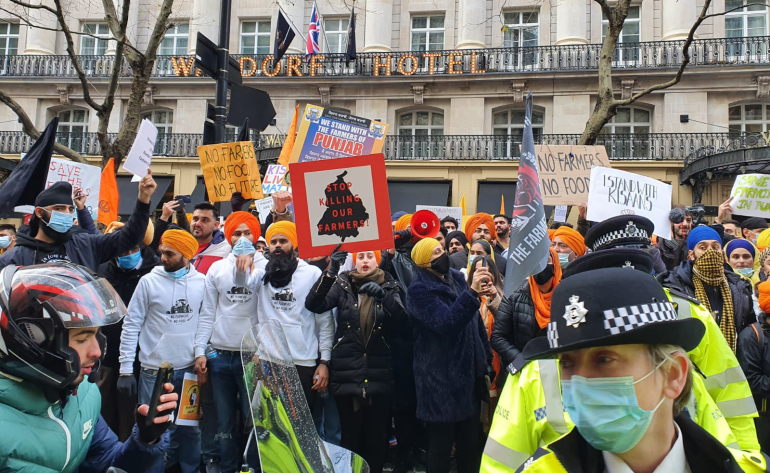