Beech ghar - the home of communal harmony. At least that is how we knew it, the big sprawling house of Rafi Ahmed Kidwai and his extended family that included his brother Shafi Ahmed Kidwai and his offspring, including my mother. The kothi was home to the entire Kidwai clan, with spouses and children who would return to Masauli, our village in Uttar Pradesh, every year with kids and grandkids in tow to touch base with their reality.

The reality was inspired by the Kidwai’s full participation in the freedom struggle, where Beech ghar became central to Rafi Ahmed Kidwai’s tryst with destiny. He sold his land to survive the long struggle, his family set synthetic clothes on fire, everyone including my grandmother wore khadi, and the stories young children grew up with were of harmony, sacrifice, struggle and resistance. My grandfather was stabbed to death as the Partition unleashed hate, while he as the civil servant in charge of Dehradun was trying to settle the chaos, and douse the fires. No one spoke of the assailant, his identity was never a matter of discussion in the family, even though my grandmother was widowed in her early 30’s with three children.

Rafi Ahmed Kidwai was the head of the family and as a Minister in free India’s first Cabinet was allotted a house in Delhi. My mother was allowed a marriage of her choice, her chosen spouse being a dashing officer from the Indian Army. My father would always speak in awe of the Kidwai household in Delhi, the level of honesty that matched his own, where jaggery was used for tea when the sugar rations ran out.

Beech Ghar was home to us all. Aunts, uncles, cousins would all travel distance to be there at least once a year for a long spell of several weeks coinciding, now that I come to think of it, with our school holidays. For us the visits were more frequent and Masauli for children was liberation from the restrictions of city life. Suddenly our extra cautious mothers turned into laughing teenagers, leaving us to enjoy the entire village as our playground.

One day we would be on an elephant stealing mangoes from a particularly unpopular grand uncle's orchards. Another day we would be following the elder cousins through the dark streets, as they shared stories of ghosts and devils. A third day we would be in a sugarcane field enjoying the luscious cane fresh from the field. Next we would be drawing water from the wells. Or at least contemplating the same.

The tolerance of Masauli shaped our thoughts. There was no Hindu or Muslim, no Shia or Sunni, no Dalit or Brahmin in our carefree world. Just humanity, love and happiness. We indeed were privileged as the generations of independence sought to cleanse the trauma of Partition with the feel good narrative. My mothers generation grew into India with positivity, and ensured that this was passed on to the children who followed.

We were proud Indians, walking through this country with the sense of ownership that all citizens shared. In later years as a journalist when I travelled often to Pakistan I realised how fortunate we were in a democracy. I also realised, and I shared this with a senior Indian diplomat who was surprised, that as an Indian Muslim I was less acceptable to Pakistani civil society than the Indian Hindus. I tried to find the reason for this and a progressive Pakistani scholar gave me the answer. I was a symbol of India’s success with democracy, and rejection of theocracy, that made some believing Pakistanis uncomfortable.

And that was true. My father also coloured by the Sufi softness of Masauli, a rare individual who had it in for the clerics and made sure they knew it, made himself very unpopular by insisting to Pakistanis that they could never win a war against India, as their generals were potbellied, too used to air conditioned comfort and certainly not fighting fit. In short the Indian Muslim did think (s)he was several feet taller than the Pakistani, a special breed in a special democracy.

Rafi Ahmed Kidwai’s wife ---Nani Ammi to all--- lived for years after his untimely death in 1954. A petite woman she lived in the very basic rooms behind Beech ghar, sitting on a charpoy, ascetic to the core, and immersed in prayer. She had a big smile for all of us, special village treats like batashas which we loved, and we as children loved sitting with her just because of the love she radiated. She was religious but not communal, in fact don't even know what that meant.

So was my grandmother, who after her husband was killed, went to Gandhi for work. She was crying inconsolably and he told her to regain her strength and come back. Anis Kidwai --Apa to all including her own children---went back, and then teamed up with Mridula Sarabhai and Subhadhra Joshi to travel through India during and in the years after Partition and help the women devastated by the violence. Anis Kidwai became a Member of Parliament in later years, and the three women never gave up on strengthening democracy and secularism in India. What an amazing trio, and while many might have found Mridula Sarabhai with her short hair cut and brusque mannerisms a little rough, we as children loved her because we could sense the softness within.

Masauli taught us equality, not only of religion, but also of gender. The Kidwai women were all educated during those times, encouraged to work, and had a say in all affairs. My mother did her MA from Lucknow University at a time when there were few women in that institution, let alone Muslim women. And before she was married, worked as a sub editor in the National Herald. Her younger sister set up a home for destitute women, far ahead of its times, where the women and their children were given shelter and were part of decision making. A lovely, happy place despite the sufferings that all the women had undergone, we would spend entire days there, playing with the children who were being educated as well.

In the process we imbibed the values of democracy, the confidence, and the tolerance. We were told we were Indians, equal to all, less than none. Slowly those generations that made Masauli central to our lives died, and we as adults have moved away from our roots. Busy lives and nuclear families came in the way, some cousins went abroad, others were immersed in their own families and Beech ghar lay forgotten. Empty, crumbling….

My last visit to Masauli a few years ago was saddening. Beech ghar was lying empty, with not a scrap of furniture. It was as if no one had lived there. Its beautiful verandahs had never been home to intense discussions, full of well known political personalities who would gather there over chai and cold water from the matkas. That the family had never come together, to sing and play and talk through the nights. That those who had died had returned to dust, with the memories being extinguished by the likes of us.

Until yesterday. When a cousin posted this photograph we learnt that an uncle had started repairs on the building and was bringing it back to how we remembered it. And with it the memories came rushing back. And the lessons of democracy were rekindled. Along with wonderment how far the Indian Muslim and India have travelled since. From being integral to the idea of India how s(he) has been attacked and isolated and humiliated.

Sometimes I think this began when we drifted away from Masauli, our roots, our life. Or perhaps it was just a coincidence. But now we seem to be hurtling down a slope of hateful mud, and abusive waters where the Indian Muslim is being compelled to redefine his or her status within a democracy s(he) was so very very proud of.

I would like to think, and find myself thinking, that perhaps that every wall that my uncle repairs to restore Beech Ghar will infuse new life into our Idea of India and repair our democracy. But then as the old and wise would say, life is not as easy as that! 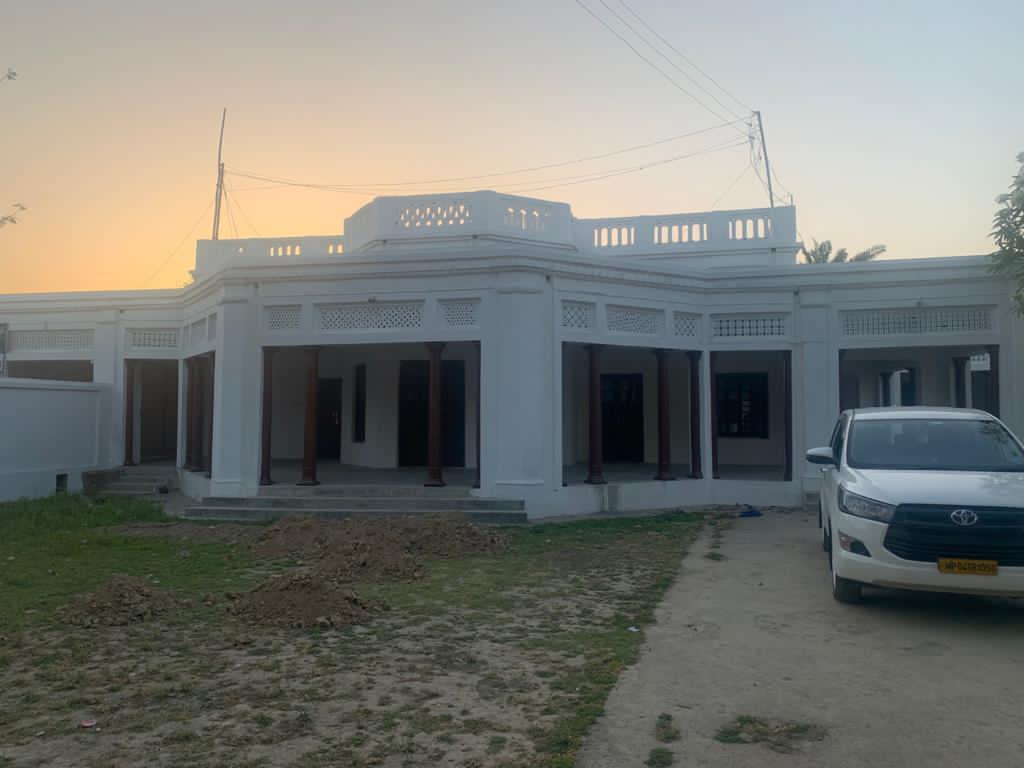