Reporting in India is Dangerous Business, More So for Rural Scribes

(Note: The New York City based non-profit, Committee to Protect Journalists released its report on press freedom in India on the 29th of August 2016. The report highlights two major points, among others: 1) Reporting on corruption in India can be lethal and there is little recourse to justice. 2) Assam, Uttar Pradesh and Kashmir are the most dangerous areas to report from (statistics do not put Chhattisgarh in top three), given their volatile institutional structures and complex civil societies.)


This report by the Committee to Protect Journalists does more than tell us that reporting in India can be a dangerous business. Rural and small-town journalists are at greater risk of being killed in retaliation for their work than those in the big cities but, as this report shows, factors such as a journalist’s location, outlet, level in the profession’s hierarchy, and social background add to that risk. The language a reporter writes in and, most importantly, what they are writing about—especially if it challenges the powerful—increase the vulnerability. 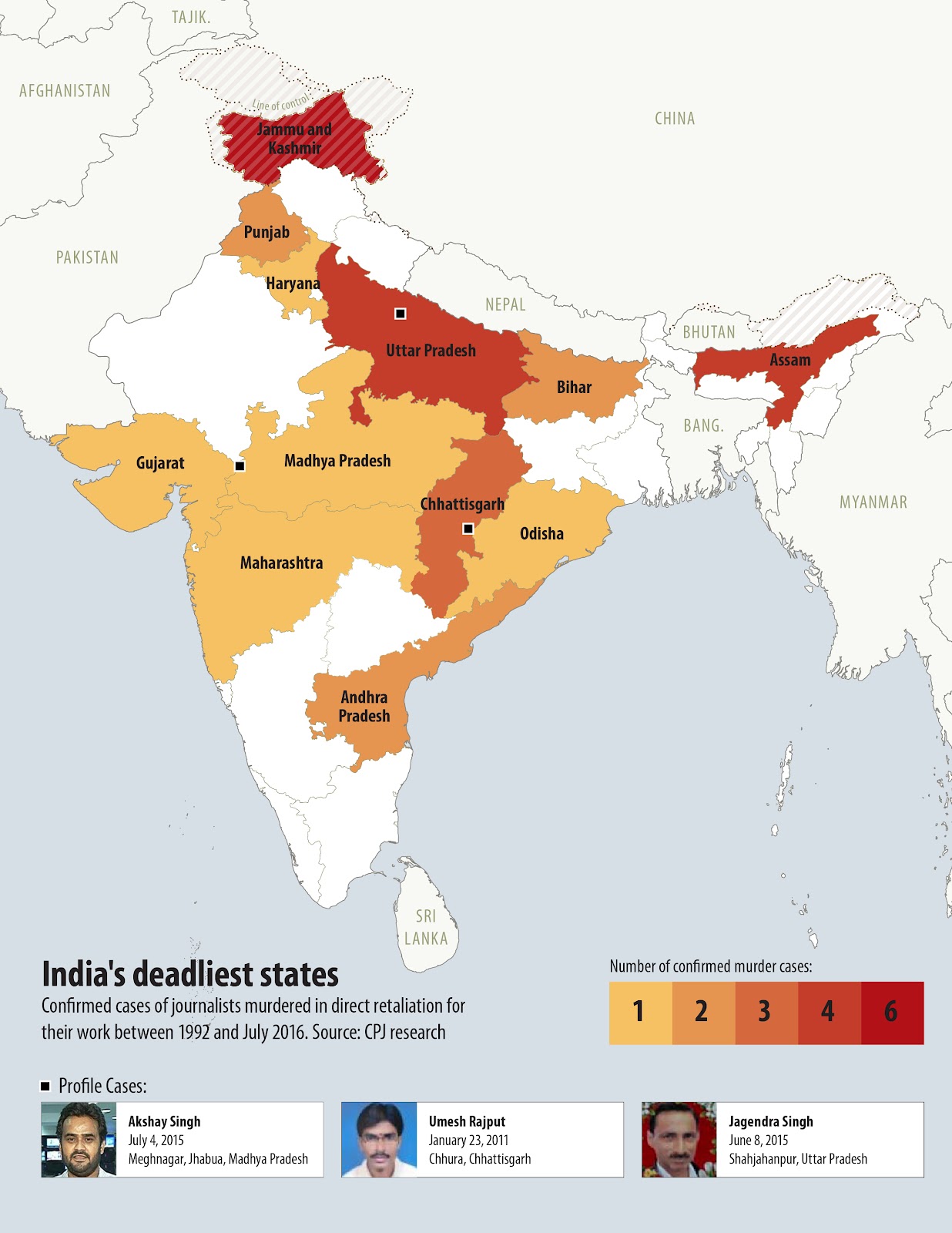 In the three case studies this report focuses on—and in CPJ’s list of 27 journalists who have been murdered in India in direct relation to their work since 1992—it is hard to find a single English-language reporter from a big city. That is, one who was working for an English outlet of a large corporate media house. And one who was covering something that challenged the interests of the mighty. The list is replete with rural or small-town journalists. The majority reported for Indian-language publications, sometimes well-known ones. Often they were freelancers or low down in the outlet’s pecking order. Mostly they worked in print—though there are exceptions. Like, for example, Saidan Shafi and Altaf Ahmed Faktoo who were shot dead in separate incidents in 1997 while working for the state broadcaster Doordarshan TV, in Jammu and Kashmir. Or Akshay Singh, who was part of the investigations team for the popular channel Aaj Tak in Delhi, and whose case features in this report.

While rural and small-town journalists often have to cover multiple beats, those included in CPJ’s list focused mainly on corruption, crime, and politics: three beats often closely intertwined. This hasn’t changed too much in the past three decades, but it has become worse with the retreat of the mainstream media from covering rural India in any depth.

When I joined the profession in 1980, most major papers had an agriculture correspondent and a labor reporter. The position of full-time labor reporter is extinct. And the agriculture correspondent now covers the agri-business and the Agriculture Ministry, not the farms. Big media tries to make up for this shortfall in coverage by running the occasional “Invisible India” page. But the truth is, rural India isn’t invisible.

The countryside has many resourceful reporters—though often they are treated as nothing more than bag carriers by journalists visiting from the metros or overseas. But the stories from rural India are innumerable and compelling. That is why, in late 2014, after decades of full-time reporting from rural India, I helped launch the People’s Archive of Rural India, an independent non-profit. The People’s Archive of Rural India is dedicated entirely to reporting on what we believe is the most complex part of the world: one with 833 million humans speaking 780 living languages.

This decline of mainstream coverage of rural India is backed up by data from the Centre for Media Studies in Delhi. Between 2014 and 2015 the center monitored six major newspapers (three Hindi-language, three English-language) and found only about 0.23 per cent of news came out of rural India. And that news occupied less than 0.25 per cent of the space on front pages.

The elite sections of the national media, particularly English outlets, are better protected. There is a built-in insurance that comes with working for powerful media organisations that have access to those in government. Individual journalists at these outlets are relentless in their pursuit of hard-hitting stories. But media as a whole has shown little interest in rural India. And still less in challenging the established order. The small-town journalists (even if a handful work for big media) will often find themselves alone and abandoned when trouble strikes.

The lack of interest in coverage of rural India, except in terms of “markets” or when natural disaster strikes; the work imposed on rural journalists—many of whom have to drum up news as well as advertisements for their publications; the coming of contract employment; and the death of journalist unions, most of which collapsed by the end of the 1990s. All these factors and more have heightened the vulnerability of the rural journalist. Very often, the more independent-minded journalist has no option but to be a freelancer or stringer.

Today, in Chhattisgarh state, some journalists have had to pull out of areas or stop working on particular stories. It has become too dangerous. A March 2016 report by a fact-finding team of the Editors Guild of India documents accounts of intimidation, arrests, and worse against journalists there. Especially those reporting on human rights violations. And, as the guild findings state, often there is little security offered or back up from a journalist’s managers or outlet.

As some of those interviewed by CPJ for this report said, even within the media there can be a tendency to undermine the legitimacy of rural journalists. Are they really journalists? Aren’t most of them corrupt? Those sweeping and generalised dismissals are seldom made in relation to urban journalists.

With India’s ranking on CPJ’s impunity index, which lists countries where journalists are murdered and their killers go free, this report comes not a day too soon. As well as the solutions suggested in this report, there are other ways that we can try to address the challenges. The public can be made more aware of what’s going on—both its nature and scale. We can try to pursue the cases of those murdered, try our best to push them through the courts faster, and do our best to see that the killers are brought to justice. And we can try to compel governments and police to act more fairly, justly and quickly. We can also ask media owners to take the safety of their journalists more seriously. Failure to do so won’t just further endanger fellow journalists, but journalism itself.

The Committee to Protect Journalists offers the following recommendations:

To the Central Government:

To the Central Bureau of Investigation:

To the Uttar Pradesh state government:

To the Chhattisgarh state government:

To the Indian media: