Youth On The Move: Break Barriers in Drone Technology

In 2015, a team of students at IIT Kharagpur had developed prototype of an ultra-modern autonomous underwater vehicle (AUV) that can defy the current standard of manually operated drones.

Named Kraken 3.0, it is be capable of conducting underwater surveillance, repair large underwater pipes and even help in finding and retrieving black box of an aircraft that crashes or is downed at sea.

The name ‘Kraken’ comes from the legendary sea monster believed to inhabit the oceans in vicinity of Norway and Greenland. Kraken 3.0, the underwater surveillance robot is the successor of Kraken 2.0 developed at the Robotics Development Centre of IIT Kharagpur.

Kraken 3.0 is a task oriented robot that can also be programmed to undertake specifically assigned tasks like: underwater survey; identifying and picking up lost objects or debris, and; conducting repairs under the hull of a ship. The robot has multiple cameras and sensors onboard that allow it to change direction if it identifies any obstacle in its path.

The 1.3 meter long Kraken 3.0 has six-thruster models that can rotate in all five directions, allowing it to get a clear view of the underwater condition. It is completely autonomous and does not require human navigation help from a control station, as once underwater it takes its own decisions. A powerful on-board computer is part of the machine.” 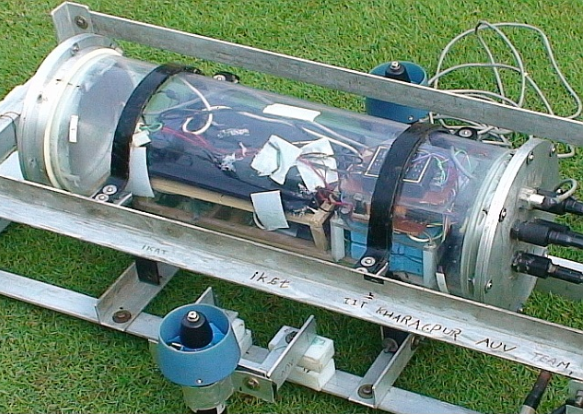 Close on the heels of Kraken 3.0, students of IIT Madras have been working on less conventional rudders, crucial for developing stealth ships. They hope to hope to develop fin-like blades, inspired by animals like penguins, turtles and fish, which can be super-efficient propellers and whiplash-like rudders.

These blades respond faster to commands and their dual functions mean they can save both in terms of fuel consumption and costs. Such bio-inspired propulsion systems can be used in ships remotely, underwater and in aerial vehicles as well.

According to the Ocean Engineering Department of IIT Madras, aquatic animals make use of a variety of propulsion systems but the IIT Madras team focused particularly on penguins and fish, which have better hydrodynamics and cause less disturbance.

Just like aquatic animals that navigate without a ripple on the water's surface, these systems can steer a vessel underwater without creating any disturbance, making them hard to detect. The penguin-inspired system developed by students of IIT Madras has two fins that use the pressure difference between the upper and the lower surface of the fins to generate propulsion, rotating and swinging to move forward.

The other system inspired by fish has two side fins near to the fore end (where the pectoral fins of a fish are) and a tail fin; both the pectoral and tail fins help propel and manoeuvre but the tailfins give larger thrust. The team tested propulsion and rudder systems on ship models in two different sizes at varying speeds; several parameters including self propulsion, thrust force, flapping amplitude, flapping frequency, forward speed, lift and drag.

Certain devices were found to be having an efficiency rate of 80% when compared to an average rate of 65%. Countries like the US, Japan and China are involved in research of bio-inspired propulsion systems.

Another piece of good news is that the National Centre for Excellence in Technology for Internal Security (NCETIS) at IIT-Bombay has developed a Ground Penetrating Radar (GPR) at 920MHz, which can not only detect tunnels but also landmines buried in soil. Presently, it is being tested for ruggedness to establish it can work in all terrains and conditions.

Now 14-year old wonder boy Harshwardhan Zala, Class 10 student of Sarvoday Vidhyamandir in Bapunagar, has signed a Rs 5 crore memorandum of understanding (MoU) with Gujarat Government during the recent ‘Vibrant Gujarat Summit’ held during January 2017 for productionizing an ‘Aerial Mine Detector-Neutralizer Drone’ designed by him. The robot will help detect and neutralize land mines on the battlefields.

Incredibly, Zala commenced work on the prototype of the landmine-detecting drone only in 2016, and created a business plan too. According to him, "The inspiration struck when I was watching television and learned that a large number of soldiers succumb to injuries sustained due to landmine blasts while defusing them manually”.

He spent over Rs 5 lakh on the three prototypes of the drone. His parents (father an accountant in a plastic company and mother a homemaker) contributed approximately Rs 2 lakh for the first two prototypes, while the State Government granted Rs 3 lakh for the third prototype.

Wired to locate and destroy, the drone is equipped with infrared, RGB sensor and thermal meter along with a 21-megapixel camera with a mechanical shutter that can take high resolution pictures. The drone is designed to send out waves that cover eight square metres while flying two feet above the surface; the waves detect land mines and communicate their location with a base station.

The mine-detector-neutralizer drone also carries a bomb weighing 50 gram that can be used to destroy the landmine. He has registered for a patent and has set up his own company 'Aerobotics', which he wants to make bigger than Apple Inc or even Google, Inc.

Zala's desire to get his product patented and produced was fuelled during a visit to the headquarters of Google, Inc. headquarters in the US where he shared a project idea with several investors after observing the way they work. Zala has several other plans that he wants to execute.

This is excellent news for an India on the move. Not that Indians ever had a dearth of innovative ideas, but such individuals were generally lured away by foreign firms. Now it is India that should optimize such talent.

Significantly, the Indian Army signed MoU with IIT Gandhinagar in December 2016 to set up a R&D Cell focusing on finding solutions for the Army.

The Mine Kafon operates in three phases uses separate robotic attachments: one, ‘Mapper’ - using a 3-D camera, GPS, and a computer, the drone maps the terrain, turning any given area into a precise grid; two, ‘Detector’ - sensors and a retractable arm keep the metal detector 1.5 inches above the ground as it geotags mine locations; and three, ‘Detonator’ - a gripper arm places a small, explosive detonator onto each mine. The drone then triggers the explosives remotely. 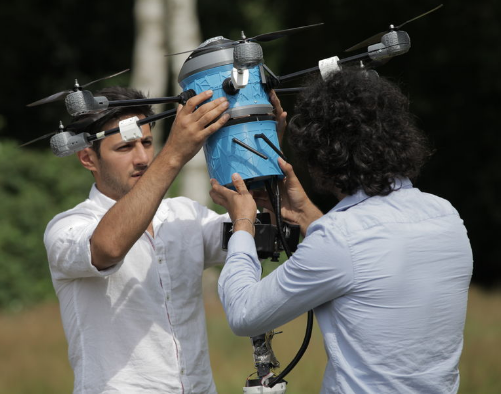 (Cover photograph: 15 year old Harshwardhan Zala making a demonstration of his land mine destroying drone to officers of the Rapid Action Foce in Ahmedabad)