Governments Keep No Promises: Desperate Tamil Nadu Farmers Return To Delhi With Poison By Their Side

NEW DELHI: Two young farmers from Tamil Nadu pulled the wooden plough in place of bulls, drawn by a widow Rani, 40, who had lost her husband because of deep debt and harassment, at Jantar Mantar in the heart of Delhi. Half naked farmers who are back in Delhi, cash strapped, debt ridden, desperate, walked with her in a procession as Rani, who is now being targeted in place of her husband, lost her bulls to the bank collecting the debt. 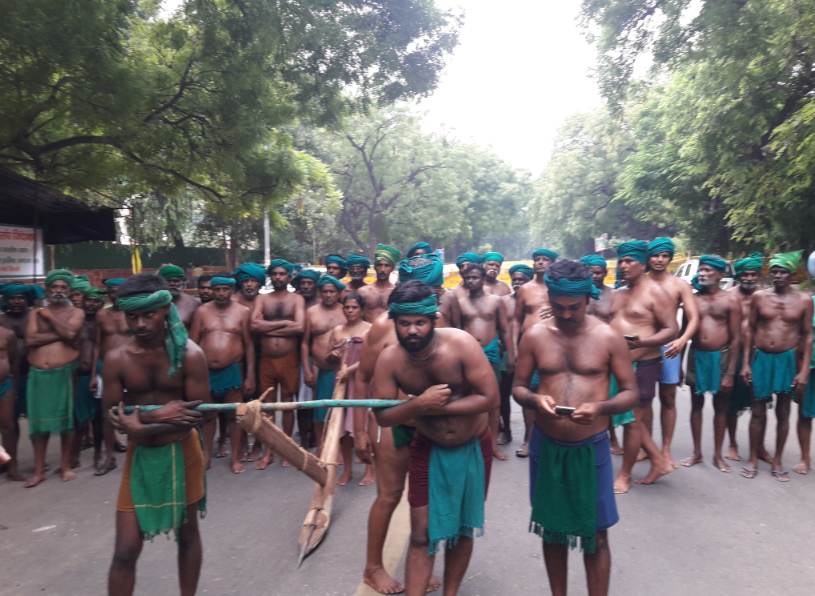 The coordinator of the protest P.Ayyakkannu became very emotional while narrating Rani's story to the gathering, his speech interspersed with slogans, “do not drive us to death”, “resolve our grievances without delay”, “save us from debt”, “protect our livelihood”, “unity of Kisans long live” amongst others. Desperation, despite the effort, is writ large on their faces.

The farmers from Tamil Nadu--cash strapped, debt ridden-- are back at Jantar Mantar, this time in loin cloth and bottles of poison by their side. The cops have taken away the poison, but the organisers say they can get it again if this effort too results in nothing. Not a single promise made by representatives of the central and state government that made them call off the first phase of the struggle has been met. Instead to add insult to injury, the AIADMK government that had been pleading ‘no money’ for the farmers has doubled the salaries of its legislators from Rs 55000 to Rs1,05,000 and hiked the MLA Local Area Development Fund from Rs 2 crores to Rs 2.5 crores each.

The farmers have come with the skulls and bones of those who have killed themselves in sheer desperation. They are half naked as a statement of their deepening poverty. On the second day of the protest that has just started again on July 16, half naked Rani with the wooden plough led the procession. 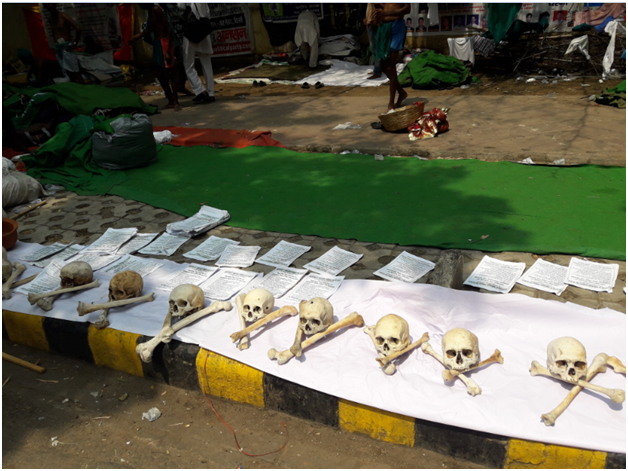 After 41 days, the farmers had returned to Tamil Nadu on April 23 on the personal request of state Chief Minister Edappadi K. Palanisamy who had assured them that their loans would be waived with the assistance of the central government within two months. P.Ayyakkannu,told The Citizen “neither the state nor centre has not taken any steps to fulfill their commitment until now”.

“We are treated like second class citizens and slaves, no one heeds our plight”, he added. The farmers will be in Delhi for 100 days, and if this too does not work, “we have brought poison that the police has taken away, but we can procure again if necessary.”

This time the TN farmers have support. Hundreds of farmers from neighbouring states joined them at the protest site at what is fast assuming the dimensions of a national protest. At least 170 Farmer organisations from Punjab, Haryana, Uttar Pradesh, Bihar, Madhya Pradesh, Odisha, Maharashtra, Telegana, West Bengal and other states have joined this protest after a Kisan Mukti Yatra that started from Mandsaur on July 6 and ended here at Jantar Mantar with the Tamil Nadu farmers. 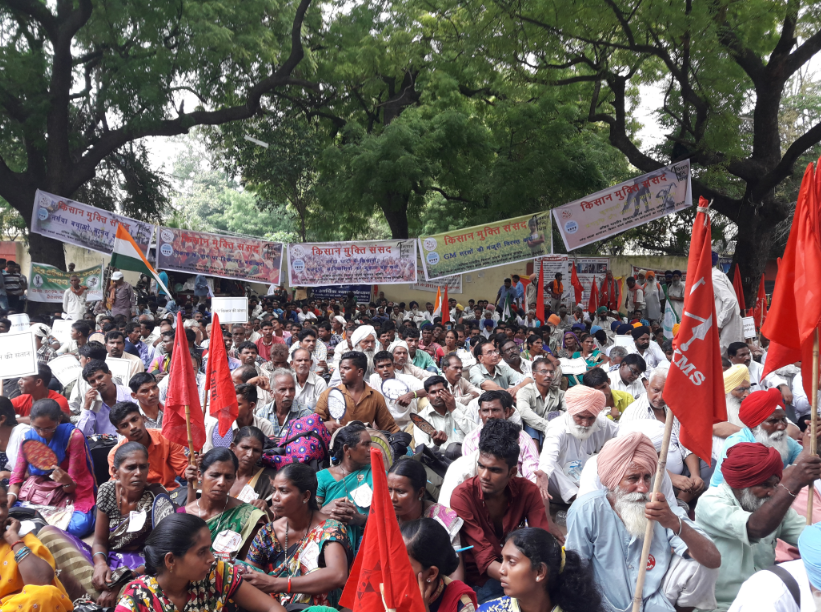 The farmers at the meeting were clear, “we are here to fight for our rights and get justice.” The protest was marked with songs, speeches, slogans. “We, the farmers of the country, have come together to fight for our rights and get justice.” The outpourings of farmers from the various states showed the magnitude of the confronting issues of the farmers. Yogendra Yadav, the founder and leader of Swaraj Abhiyan was present in solidarity with the farmers. VM Singh, the convener of the All India Kisan Sangarsh Coordination Committee told The Citizen, “our main aim is to stop the farmer suicides and to press for the implementation of the recommendations of the Swaminathan report”.

A group of 40 children from Maharashtra whose farmer parents had committed suicide because of utter penury were also part of the protest. They urged the farmers not to commit suicide, as the children then have to pay a very heavy price.

The demands of all the farmers include:

1. Full debt relief for the farming community of India.

2. Implement the Swaminathan Report at once.

4. Take back the cases against all protesters.

There is a spike of farmer’s protests in various parts of the country recently as they are mired in a vicious debt trap, and not getting the minimum support price for the agricultural products in the absence and lack of pro- farmers policies for a very long time.Without taking into account the real issues at hand, the governments have been trying to suppress the agitating farmers who are being threatened with draconian measures. For instance, the BJP ruled Madhya Pradesh witnessed a huge protest of farmers at Mandsaur for seeking fair price for their agricultural products leading to the death of seven innocent farmers in subsequent firing by the state forces.

Tamil Nadu government has been a mute spectator and has washed its hands off by citing shortage of state funds. The Madras High Court recently ordered an extension of loan waivers for the farmers who are holding more than five acres of land, along with the small and marginal farmers from the state owned cooperative banks and societies. But, the Supreme Court stayed the extension of loan waivers to the concerned farmers. According to a farmer K.Damodharan, aged 50, “We were let down by the highest Court of the country which favoured the plea of the state government; instead of the farmers plea” . 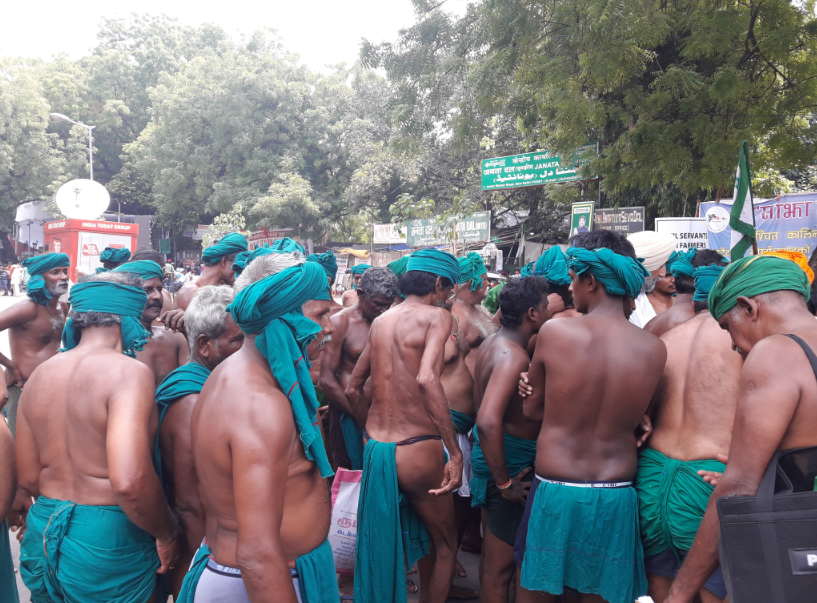 Apart from the protest of TN farmers in the national capital, the state has been witnessing a long series of intense protests by the farmers at Neduvasal in PuduKottai district and Kathira Mangalam in Kumba Konam Taluk against the Hydro Carbon projects and the extraction of Methane from the Cauvery delta region. The peaceful protestors were arrested for their resistance and a college girl Valarmathi, who was in the forefront in mobilizing the people was arrested under the Goondas Act for allegedly instigating a law and order problem in the state instead. This move was severely condemned by the opposition parties and the general public alike.

In the wake of growing protests of the farmers across the country, states like Uttar Pradesh, Punjab, Madhya Pradesh, Maharashtra and Karnataka came up with the measure of loan waivers. But besides this the farmers have been asking for a fair price for their agricultural products. They are demanding a concrete agricultural commodities price policy. Over all, undermining of the farmers interests by successive governments wedded to a globalized market driven economy, has relegated the farmers to “do or die” situation in the country.

(All Photographs by Dr M. MAHALINGAM)