I saw Rolling Stone’s Sarah Posner interviewing a young woman with a bandaged forehead. The bandage didn’t quite cover the deep gash, which appeared to run from her hairline into her eyebrow, that she said she received when a white supremacist demonstrator used the edge of his Plexiglas shield as a weapon against her. She had been to the hospital to be stitched back up, but it was clear her face would bear that scar for the rest of her life, never mind the psychic wound.

I asked a young man who appeared to be of Asian descent, sitting among his colleagues, if he would be willing to talk to me. He declined, and looked a bit dazed. “I’m still trying to process all of this,” he said.

One counterprotester who was willing to talk went by the nom de guerre of Antonin Sotomayor. He is a white man who appeared to be in his 30s, with piercing blue eyes. Born and raised in North Carolina, where he still lives, he spoke with great passion of the armed resistance, by people of all races in the South, to the wealthy people who owned mines and plantations. He cited the Battle of Blair Mountain. He saw the sticks carried by many AntiFa protesters, he said, as weapons of self-defense. He is a recent law school graduate, he said.

“Earlier in the day, and last night, you had the ‘alt-right’ coming and actively seeking out people — some of them really had no part in this — to assault. So this is community self-defense,” he said.

When challenged over whether or not the carrying of weapons by counterprotesters was unnecessarily provocative, he replied, “Well, I think you see how effective the left has been since COINTELPRO,” citing the acronym for the counterintelligence program launched by the Federal Bureau of Investigation that often used illegal surveillance tactics on antiwar and civil rights groups beginning in the 1950s and continuing until 1971, as well as infiltration of those groups. “And I think that maybe we should turn back to the boldness of the pre-COINTELPRO days.” He expressed admiration for the tactics of the Black Panthers, but also for the International Brotherhood of Teamsters under the leadership of the late Jimmy Hoffa, who went missing in 1975.

I suggest that some people would say that the Teamsters in those days were a goon squad.

“Well, the right has a goon squad,” he replied.

When I left Charlottesville, President Trump had finally come to the cameras to address the violence that had engulfed the town. Rather than cancel his planned televised signing of a bill for veterans’ health care, he simply incorporated his weak, “many sides” condemnation of violence into his celebratory event, which took place at his golf resort in Bedminster, New Jersey.

Earlier in the day, David Duke told a reporter that the groups assembled in Charlottesville for the Unite the Right rally came to “take our country back” and “fulfill the promises of Donald Trump.” Duke said that taking the country back — from whom or what he doesn’t make clear in the interview — “is the reason we voted for Trump.”

There is no mistaking that many among the white supremacist movement regard the president as their ally. Some marching with white-power contingents wore the Trump campaign’s trademark red “Make America Great Again” caps. In March 2016, Matthew Heimbach, leader of the white nationalist Traditional Workers Party, shoved a black protester at a Trump campaign rally after the candidate urged his supporters to “get ‘em out of here,” and advocated the use of force. Heimbach was to have been one of the featured speakers at the rally that was shut down in Charlottesville.

At no time during his televised appearance did Trump condemn white supremacy, white nationalism or the “alt-right.” When, as he concluded his remarks, reporters shouted questions asking if he condemned white nationalism, Trump simply walked away from the podium.

Later that evening, he tweeted this about the woman who lost her life when a car driven by a white nationalist plowed into the intersection where she was protesting peacefully: 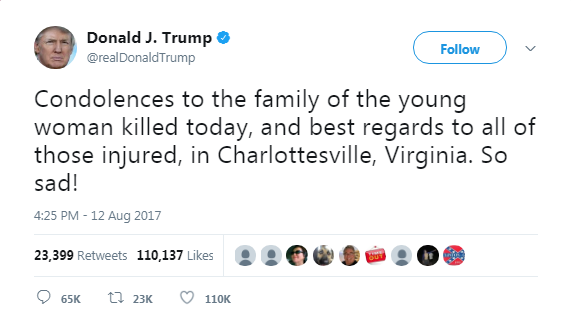 When the identity of the driver, James Fields of Maumee, Ohio, was revealed and his mug shot circulated, he was found to have rallied with Vanguard America, one of the neo-Nazi groups involved with the rally. Vanguard America denies that Fields is a member. The New York Daily News reported that Fields’s mother, Samantha Bloom, said that her son had told her he was going to a rally, which she thought “had something to do with Trump.”

Public outcry appears to have prompted Attorney General Jeff Sessions to announce, later that night, that the Justice Department would launch a civil rights investigation into the incident.

In an interview with Posner of Rolling Stone, Richard Spencer said he and his friends were celebrating that evening, seeing the day as having been a success, despite the shutdown of the rally. In fact, he said, they were having a party. As for his future plans, “I think we’re going to have to come back to Charlottesville,” he said.

Meanwhile, alt-right rallies are planned in at least nine cities for next weekend all over the country. One may be coming soon to a monument near you.

For part one here

(Adele M. Stan is a weekly columnist for The American Prospect. This article has been made possible by the readers and supporters of AlterNet)