A Protester's Dilemma At 2 Parallel Protests in Lucknow: LGBTQ Rights, Gauri's Murder or Both?

LUCKNOW: Which would you choose?

Not just writers and journalists, but everyone with an active social media account took to condemning Gauri Lankesh’s murder and the alleged ‘saffron brigade’ held responsible for it in 140 characters or less on Twitter and 1400 characters or more on Facebook.

Adjoining this heavily shared image were posts about protest demonstrations the following evening all over India from Delhi to Chennai and every city in between, urging representation.

Lucknow was on this list and I decided to converge at the Gandhi Pratima in Hazratganj to make my voice heard among many other dissenters in this city of Nawabs and Shayaars. Laden with a placard that read ‘Resist!’ in bold red lettering, I reached the protest grounds at 5 pm. True to the rich cultural heritage of the city, a wide ranging diaspora of writers, journalists and poets in all their Lucknawi candor had slowly begun to trickle in around a Gandhi Statue directly facing a police-thana.

A scattered few policemen bearing lathis stood resolutely at the periphery of the grounds, gazing forbiddingly at the mahasaba of literati and wordsmiths, which they feared could effectively mobilize any mass gathering by sheer force of will.

Spearheading this protest in Lucknow, Deepak Kabir, an activist and protestor invoked fiery excerpts from Bhagat Singh’s Jail Diary and similarly charged Urdu shayaaris. Eminent journalists contributed to the discourse with poetic paraphrase and unanimous condemnation of Gauri’s heinous murder. A lot of emphatic speeches were made and impassioned debate ensued. In no time, the gathering was 50 strong in number and steadily rising.

In this droning humdrum of political finger-pointing, my eyes wandered to a smaller gathering of LGBTQ rights activists who had set camp adjacent to the Gauri protesters. Although they screamed catch-phrases at the top of their voices, their collective sloganeering went largely unheard as they were heavily outnumbered by the Gauri protesters. They also didn’t have a mic or speaker, which was made available to the latter by way of endorsement by invested political parties like the Communist Party of India (CPI) and the Aam Aadmi Party.

This meant that the LGBTQ rights supporters, amidst the throng of neo-liberal writers and journalists?—? who could have otherwise been their mouthpiece, were left to fend for themselves. Not one single person from the Gauri camp even attempted to migrate a few feet further and embolden the LGBTQ community’s desperate plea. Instead, the Gauri protesters chose to ignore them entirely.

As news vans loomed into sight, they hurriedly set up their cameras and took to the task of filming another headline crunching protest in support of Gauri. Reporters with notepads converged at writers and poets to jot down their say on the highly publicized murder of Gauri Lankesh, effectively turning a blind eye to the lone LGBTQ rights warriors. No cameras turned in their direction and no reporter approached them. Perhaps, they didn’t consider the LGBTQ rally juicy or succulent enough for mainstream TV. I was amused at how these seemingly disconnected events unfolded before my eyes. I stayed put to see if things would change over the course of the evening. 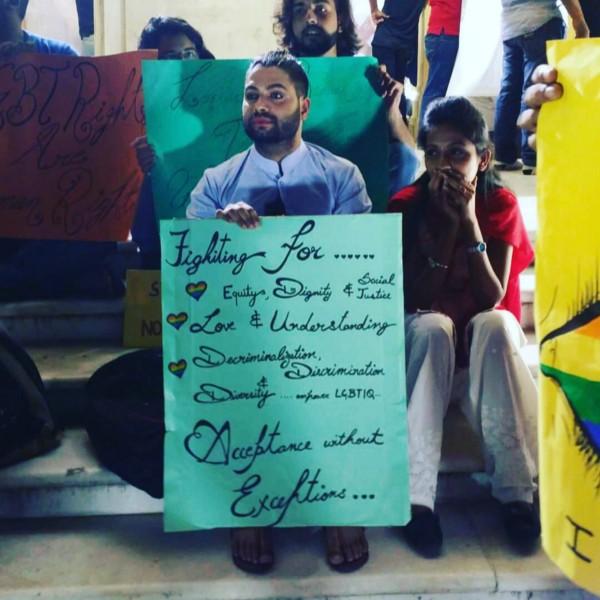 Incidentally, the LGBTQ rights activists were protesting the death of another ‘Gowri’, a 28-year-old transgender woman who was found strangled to death in Aluva, Tamil Nadu recently. As of today, her murder case remains unresolved. More than the coincidental shared name, the Gauri camp and LGBTQ rally shared the same agenda?—?the former was fighting for Freedom of Expression and the latter for Freedom of Expression of Love. Yet, one camp was met with frigid silence and the other with vociferous naareybazi.

In the wake of the Supreme Court’s recent ruling on Section 377 and the Right to Privacy, a tiny ray of hope has emerged for the LGBTQ community in that their voice is beginning to be heard at the apex court of India. Now, more than ever, the community could use the active support of the people of India in kick-starting reformative policy in their favor.

However, counter-intuitively, even in the ranks of progressive and liberal-minded Indians there exists a lingering stigma which has ostracized the LGBTQ community from ‘civil’ gatherings or protests. This stigma manifested itself yesterday in the marked absence of attendees at the adjoining LGBTQ rights activism rally in Lucknow.

While Gauri Lankesh’s murder threatens our collective freedom of expression drastically and therefore requires strong and vocal condemnation, so does the murder of a transgender woman. Both of these heinous crimes were perpetrated by forces with a common modus operandi aimed at curtailing our basic freedoms.

For our uprising against these anti-social elements to be truly effective, it must first be all encompassing. We need to lend our voice everywhere that matters, without fear or shame. In my dilemma over where to represent between these two simultaneous protests, I represented at both. And you should too.