It Never Rains But Pours, And The BJP Is Now Thoroughly Drenched in Maharashtra

MUMBAI: A strong wave of criticism from all quarters over the Elphinstone over bridge tragedy has drenched the BJP government to the very bone. Shiv Sena, leading the attack, has stated that it had written several letters to the government to repair the overbridge even as AltNews reports on a series of tweets that had warned the government of impending disaster where this shaky over bridge was concerned.

However, the warnings were not heeded with Prime Minister Narendra Modi’s bullet train taking precedence over the issue of railway safety, that includes the overbridges like Elphinstone where the stampede and the resultant deaths and injuries has created anger and resentment across. The Congress party has issued statements along with the Shiv Sena over the lopsided priorities of the BJP, where crores are spent on a bullet train on one limited route while nothing is done to improve railway security and safety that has been deteriorating by the day.

Warnings were not heeded, and even ally Shiv Sena’s missives ignored. SS MP Sanjay Raut described the tragedy as a “public massacre.” As he said in sentiments echoing what is being heard on the streets of Mumbai today, “You have money for bullet trains, but not for repairing the bridge. You let the poor passengers die...and for moneyed passengers, you talk about bullet trains.”

Nationalist Congress Party leader Ajit Pawar also said that the proposed bullet train had little to do with Maharashtra, and was PM Modi’s pet project for his his home state Gujarat. “Had Fadnavis instead thought of improving the condition of the railways in Maharashtra, such terrible mishaps would not have occurred,” he said.

AltNews has reported on a series of tweets that had warned the government and were ignored by the government despite the photographs and the possible consequences being spelt out. Instead the government was busy making preparations to rename the bridge Elphinstone to Prabhadevi when the tragedy struck. Alt News reports:

“Dear Indian railways, Parel – Elphinstone over bridge is a colossal disaster waiting to happen“, “@sureshpprabhu sir raised an issue of overcrowding on parel station railway bridge. Will u only act when someone dies or there is a mishap?“….Tweet after tweet warning of the impending disaster fell on deaf ears. The tragedy that was waiting to happen has happened. The stampede on bridge connecting Elphinstone Road and Parel railway stations has left 22 dead and scores wounded. ?

?Alt News has found scores of tweets where commuters warned about the situation on the bridge, some even attached photographs while others pleaded for action. Those who tagged the Indian Railways got the standard response that their suggestion was being looked into.?

?Here is a selection of the tweets.? 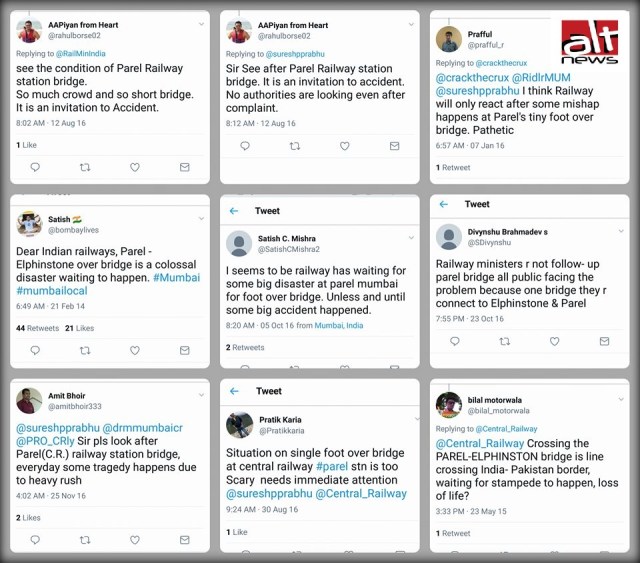 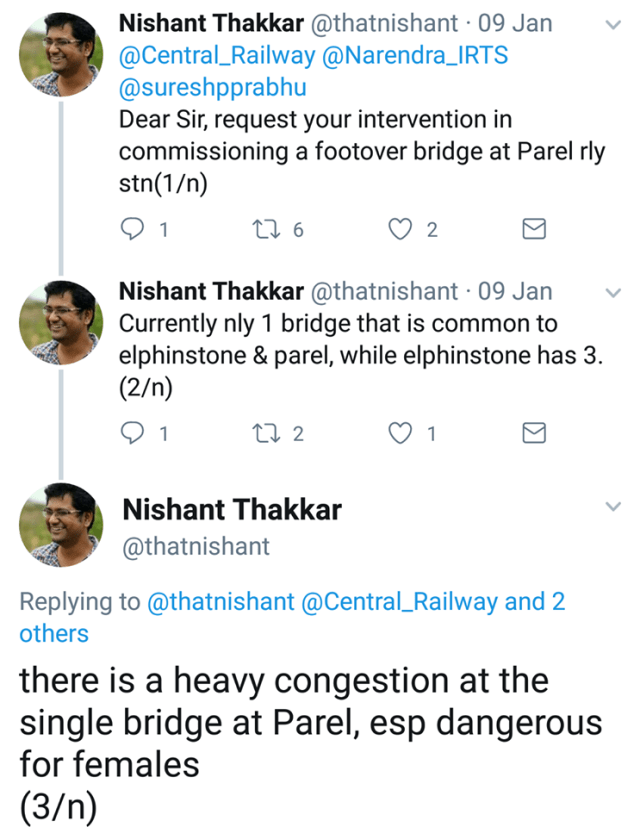 Arvind Sawant, a Shiv Sena MP had also flagged the need for a new bridge. The Railway Minister at that time, Suresh Prabhu responded that his request was under “positive consideration.” Speaking to CNN News 18 after the stampede, Sawant said, “Nothing on bridge done till date.” 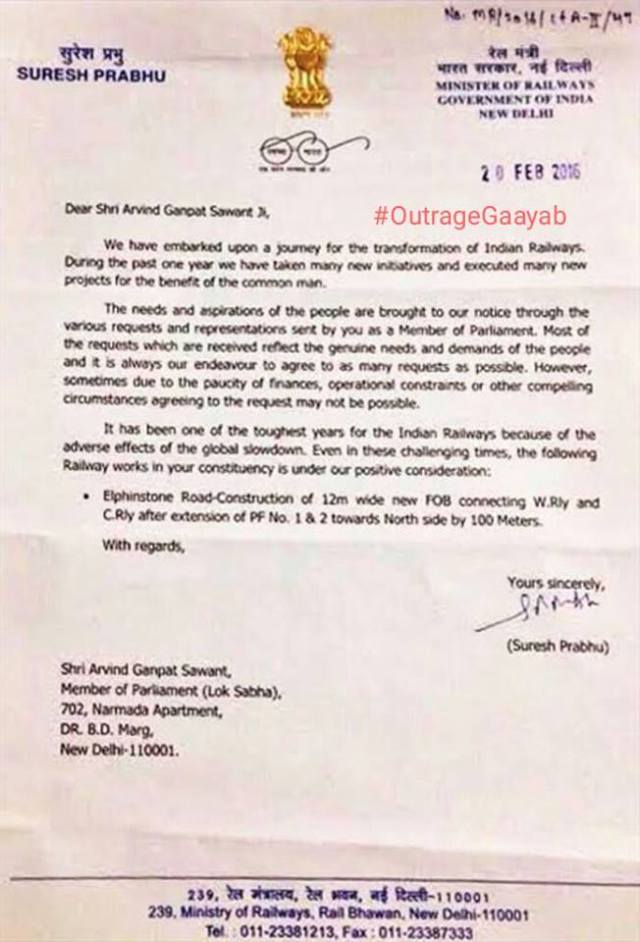 ?Even though no action was taken on the repeated requests for the overbridge, the station was in news in July this year when it was renamed to Prabhadevi.

?It took a tragedy of this scale to shake up the administration. Indian Railways has now come up with a series of steps after an emergency meeting with the Railway Minister, Piyush Goyal.