The Other ‘Fab Four’ of Indian Cricket

For cricket fans of today’s generation "The Fab Four’" will always be Rahul Dravid, Sachin Tendulkar, Sourav Ganguly and VVS Laxman. The quartet undoubtedly the most lustrous batting line-up in the game scripted one famous triumph after another making the first decade of the new millennium the greatest ever in Indian Test cricket.

But for cricket fans of an earlier generation "The Fab Four" can only mean the famed spin quartet who ruled the roost from the mid sixties to the late seventies and shaped innumerable notable victories at home and abroad. 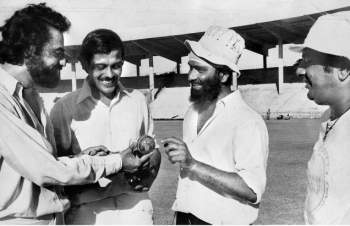 In their own way they terrorized batsmen as much as Roberts and Holding, Lillee and Thomson. Ian Chappell one of the best players of spin bowling reckoned that his cricketing education was completed on the 1969-70 tour of India as he had to take on the spin bowlers at their peak. He said that if the body had to show tremendous reflexes in trying to negotiate a fast bowler the brain was working overtime in trying to tackle the famed Indian spinners. They had so many ideas, so many variations that the batsman was at his wit’s end in trying to just negotiate an over successfully.

Bishen Bedi, Erapalli Prasanna, Bhagwat Chandrasekhar and Srinivas Venkatraghavan took 853 wickets between them. For most of the time they played for India the new ball attack was a farce and it was not uncommon to see Bedi start warm-up exercises in the field even as the second over of the innings was being bowled. After all he would be bowling the next!

Prasanna made his Test debut against England at Madras in January 1962 and two years later against the same opponents Chandra played his first Test at Bombay. In February 1965 Venkat made his debut against New Zealand at Madras and Bedi joined the ranks against West Indies at Calcutta on the last day of 1966. For well over a decade the quartet was Indian cricket’s potent force. As Scyld Berry notes in his book 'Cricketwalah’ which covered the England tour of India in 1981-82: ''Then occurred one of the strangest coincidences in cricket. A quartet of spinners who were to turn India from a second rate cricket power into a world force emerged simultaneously in the sixties.’’ In 1971 when the quartet enjoyed a glorious phase scripting series victories in West Indies and England John Arlott paid a handsome tribute when he wrote: ''The Indian spinners are the finest slow bowling combination, perhaps the most dangerous attack in the contemporary game.’’

At home the spin quartet shaped one notable victory after another. But more outstanding was the manner in which they shaped triumphs abroad. In their time together India won Tests in New Zealand, West Indies, England and Australia something quite unthinkable before. Almost every victory was scripted by the spin quartet. Such was the mastery over their craft that their long reign is hailed as the apotheosis of Indian spin bowling.

At the start of the 1978-79 season there was still no challenge to the spin quartet. Obviously they were all getting on in years but could take comfort from the cricketing adage that spinners mature with age. The four were still in their rightful place when the Indian team took off for Pakistan for a barrier-breaking tour with the teams meeting after more than 17 years. Prasanna was 38, Venkat and Chandra 33 and Bedi 32. They were still famous and respected as bowlers with rich experience and a varied repertoire of tricks. There was nothing to indicate that the tour would mark the break-up of the longest serving band of spin bowlers the cricketing world has ever known. And yet this was precisely what happened.

The Pakistan authorities aware that the quartet would pose the main problems prepared pitches that would finish them off as a threat. Placid wickets perfect for batting were placed before them. On such true surfaces even the vast experience and incomparable skill of the spinners came to nothing. For the first time since the spin quartet came together 12 years before India could not bowl out the opposition even once in the three Tests. At the end of the series Chandra had taken eight wickets at 48 each while Bedi’s six wickets cost an astronomical 75 each. Prasanna played in two Tests and took just two wickets at the horrendous cost of 125 each. Worse the series was lost 2-0 and the inquests started. Venkat did not play in any Test but the three others came under the scanner. Was their time finally up? Was the quartet well over the hill? Perhaps the time had come for the unthinkable – replace one of the quartet with a young, untested spinner.

During the home series against the West Indies that followed the selectors finally broke up the quartet by bringing in Narasimha Rao and Dhiraj Parsanna to replace Chandra and Bedi. Prasanna did not play Test cricket after the Pakistan tour and Venkat was now the fulcrum of the spin attack. However neither Rao nor Parsana was up to the mark and the selectors fell back on Bedi and Chandra for the tour of England in 1979. But the pressure was already on the quartet that had now become a trio. Chandra and Bedi played their last Tests in England – quite unsuccessfully – and that was effectively the end of the quartet. During the transition period Venkat played three Tests against Australia at home in 1979-80 and then the phasing out was completed with Shivlal Yadav replacing Venkat even as Dilip Doshi finally stepped into Bedi’s shoes.

Venkat made a comeback playing seven Tests in 1983 but by now he was well past his best and when he played what proved to be his last Test In September that year it was time to recall the memorable deeds that the spin quartet had performed. Besides the fact that the new ball attack was a joke they faced increased pressure because of the inconsistent batting. Unlike the new millennium when India ran up totals of 700 plus the batting was largely brittle during the time of the quartet. Frequently they had to defend totals of 200 and 250 and this they did successfully on many occasions rising to the occasion manfully. Oh yes, for old timers who were lucky to see them in action the mere mention of the spin quartet is enough to make their eyes sparkle with delight.