Are Contemporary Cricketers Playing Too Much Cricket?

It doesn’t require rocket science to know that cricketers exert themselves a lot these days. With the emergence of T20 and franchise-based tournaments, a cricketer’s workload has significantly increased. Almost a decade ago, the number of working days on the field for any cricketer was drastically low than that of any contemporary cricketer. Cricket is one of the most strenuous games in the world; it demands horse-like stamina, hawk-like attention and flexibility that is as good as a worm. With the standards of the game evolving constantly, one cannot afford to step a foot wrong in contemporary cricket.

Over the years, players have been preached to push beyond the limits. The competition is such that players are keen to make the most of every opportunity coming their way. At times, they do become ignorant towards a budding injury and consider it as just another barrier in their run. But this move can backfire at times and cost an important series or tournament due to lack of workload management.

The Asia Cup is in full swing at the moment and India are without the service of their key batsman and skipper Virat Kohli. Reason for his absence? Excess Workload. The elegant right-handed batsman has been rested for the Asia Cup, which was pretty much on the cards, due to a hectic schedule in the recent times. The Asia Cup commenced just few days after the completion of India’s England tour, which spanned for two months. Kohli was a part of every encounter that comprised of five T20Is (two against Ireland), three ODIs and five Tests.

Let’s take a look at Kohli’s working days on the field from 17 September 2016 to 17 September 2017. He played 15 Tests, 24 ODIs and 5 T20Is along with 11 IPL games in that period. That is exactly 115 days of cricket. One should also remember, these working days does not include frantic travelling, particularly during the IPL, domestic games, hours of press conferences and countless hours of training in the nets. The numbers are pretty much close when we take in to account the next year (17 Sep 2017 to 17 Sep 2018), where he had 98 working days. One can only expect this to rise, especially after the emergence of t20 cricket.

Let’s compare these numbers with a cricketer from yesteryear in his prime. Let’s talk about Sachin Tendulkar’s records from 17 Sept 2003 17 to Sept 2004. Tendulkar played a total of 9 Tests and 25 ODIs, which amounts to 70 days on the field in that period. This also means less travelling and more time to relax, and Tendulkar was certainly the talk of the town during his playing days and easily one of the busiest cricketers of his time. We can also compare Australian legend – Ricky Ponting’s numbers in the said period. With 10 Tests and 28 ODIs, Ponting had 78 working days. The difference is surprising, and one also needs to take in to account the amount of stress and pressure a cricketer goes through in any international game, which was relatively low for other cricketers that time. 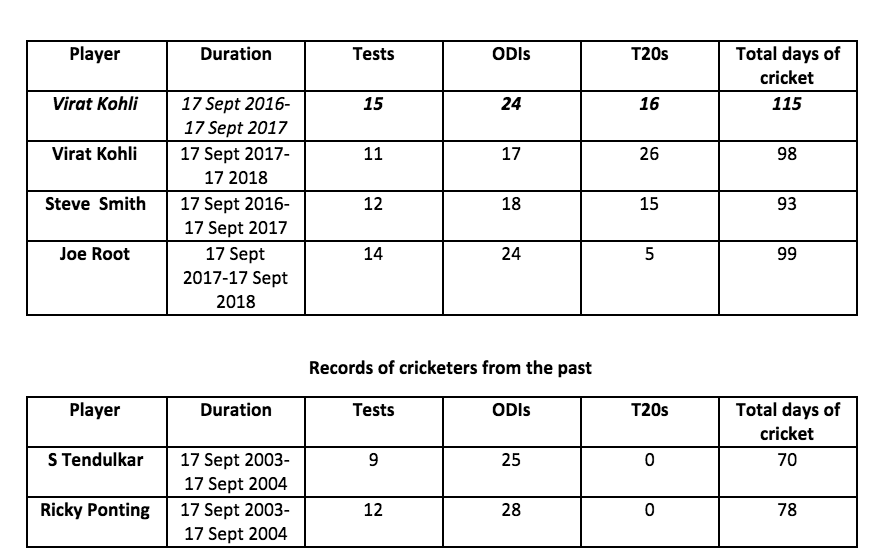 The table above gives a clear idea about the increase in players workload from time to time. One of the latest cases of India suffering a huge blow was Bhuvneshwar Kumar’s absence from the Test series against England. In conditions tailor-made for his deadly swing bowling, one can only imagine the kind of impact he would have had if he was available for the series.

A fast bowler is prone to injuries and Bhuvneshwar’s workload was not managed cautiously, which caused an injury at a crucial time. After the South African tour, Bhuvneshwar Kumar featured for Sunrisers Hyderabad in the Indian Premier League, which lasted for almost two months. He played the T20I series and got injured after a solitary ODI. Some smart workload management would have done wonders for him; India could have managed the T20I series without him and saved his energy and fitness for the Tests. Also, was IPL more important keeping in mind the upcoming England tour? International cricket, especially Test should have been given priority.

Playing so much of cricket is also wearing out cricketers. Not many of them would even cross 100 Tests benchmark and many cricketers in the past have spoken about the excess workload. Cricketers like Brendon McCullum and AB de Villiers retired way before than people expected them to do so. What could be the solution for this? Now, that’s a tricky question but introspecting a players workload and managing it in a way that they remain fit and the team benefits the most should be the way forward. As of now, contemporary cricketers are playing excess cricket… and something needs to be done about that.