Gundappa Ranganath Viswanath turns 70 on Tuesday and while it is an occasion to wish the supreme artist of Indian cricket a very happy birthday it will also be relevant to remember his immeasurable contribution to Indian cricket.

Viswanath appeared on the scene when Indian cricket was in desperate need of someone like him. The Indian batting order had little solidity, consisting of a couple of swashbucklers and a few aged artisans. What was needed was the presence of a true artist. The batting was becoming increasing plebeian with hardly any sparkle. And then came this pocket sized wonder from Mysore to brighten up the Indian cricket horizon. From then on, almost every day was like Diwali.

Viswanath’s place in the pantheon of the great Indian batting stars is secure and unchallenged. Time has no doubt lengthened the list of great Indian batsmen but the stature of GRV remains undiminished. He stood only 5 feet, 4 inches but that was the only thing small or little about him. He was a big-hearted cricketer who wore his patriotism on his sleeve. His gifts were varied and prodigious. He had marvelous eyesight and remarkably quick reflexes and this enabled him to play the ball that much early. He was held in awe by his opponents and was worshipped like a demigod by his countless fans. He had the prettiest of strokes. The bat in his hands was a wand through which he wove a magic spell that left bowlers and fieldsmen bewitched, bewildered and breathless. Power was not the essence of his batting, but timing was.

Viswanath’s tenures at the crease could be compared to that of a musician at a concert. Like Ravi Shankar and Bismillah Khan in their arts, he held you spellbound with his matchless craft. You watched him with rapt attention as you would listen to the two others. He was always a great favourite with the crowd, who cheered him loud and long every time he came to the wicket, for they knew that while he was at the crease, they would witness batting in its highest art form. I watched Viswanath play several innings and not once can I remember the spectators booing him for slow scoring, though a Srikkanth or a Sehwag he was not. He was always watched with more than just keen interest. Even a defensive stroke - normally a dull thud of bat against ball – was a thing of beauty and grace when he played it. He sculpted his runs at the rate of roughly 25 an hour not with monotonous regularity but with strokes of ethereal beauty and grace. Seeing him execute some of his shots, which were the epitome of elegance, one was reminded of the work of sculptors, which is the work of perfection. There were touches of Vijay Hazare when he drove and shades of Vijay Manjrekar when he cut. While these strokes were predominant in his repertoire, he was also a daring hooker and had the most attractive leg glance one could hope to see.

Viswanath appeared on the first class scene about the same time as Sunil Gavaskar. He made his Test debut a season before Gavaskar. Viswanath was just a few months older and the careers ran parallel. Throughout the seventies and till the early eighties, the two were the batting kingpins. It was Indian cricket’s good fortune that for a full dozen years the artisan and the artist were both around for it was a combination that spelt disaster for bowlers all around the world. But while Viswanath was certainly the more gifted of the two he was also more likely to give the bowler a chance by flashing unwisely outside the off stump. Otherwise, like Gavaskar, his judgment of line and length, his body balance and his footwork were superb. Viswanath had wrists of steel and hit the ball with a wondrous touch and a sense of timing and control that was unsurpassed.

At the time he played his last Test in 1983, Viswanath’s run tally (6080) was next only to Gavaskar’s. His 14 hundreds too were second only to Gavaskar. Viswanath’s 91 Tests were at the time an Indian record and he played in 87 consecutive Tests – a world record. As is well known, when Viswanath got a hundred, India never lost a match. It helped in a victory four times and on ten occasions, his ton helped India to draw the match. Perhaps no other single statistic can adequately convey his value to the side during his long career or the ability to rise to the occasion when others found the going tough. Of course his sportsmanship spirit is legendary and he was one of the very few gentleman cricketers. Along with his ethereal batting this was his legacy to Indian cricket. 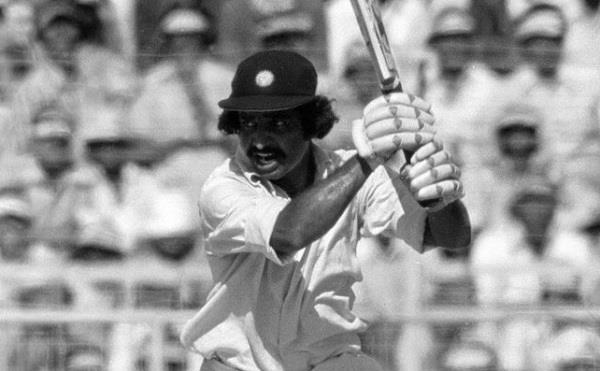