‘Prajnesh Can Break Into the Top 50’

Prajnesh Gunneswaran has arrived on the scene when Indian tennis is in desperate need of him.

Once regulars in the prestigious World Group India has been languishing in the regional Asia/Ocenia zone for some years now. Indian players are making no headway around the ATP Circuit.

There was a time when Vijay Amritraj was ranked No 16 in the world and Ramesh Krishnan No 23. In the last quarter of a century the two leading players Leander Paes and Somdev Devvarman have gone no higher than 73 and 62 respectively. The country has produced some of the leading doubles players in the world and Paes, Mahesh Bhupathi and Rohan Bopanna have won quite a few titles between them.

Vijay Amritraj has for long emphasized the need for two committed singles players for India to make significant progress in the Davis Cup. As he has pointed out the singles constitutes four points while at best the doubles can give India one victory. Bhupathi now the Davis Cup non-playing captain after the loss to Italy in the World Group play off tie a couple of months ago emphasized the need to have at least two players in the top 100. Now at least India has one in Prajnesh. And Vijay is of the view that he has it in him to rise to the top 50 in the ATP rankings.

Well, the country has not had a top 50 player for some 30 years now and it will really be something if Prajnesh can make it there. At the moment he is some distance away with a ranking of 82. But even that is fairly remarkable given the fact that he was 243 at the start of 2018. However the 29-year-old left hander from Chennai fully aware of the intense competition gave himself more realistic goals – playing a Grand Slam and getting into the top 100 in 2019.

In January he qualified for the main draw at the Australian Open where he lost in the first round. Shortly afterwards he made it to the top 100. Then he was perched at 97 for some time before a brilliant performance at the just concluded Indian Wells Masters saw him reach a career best 82.

It is this showing in a star studded field that included the likes of Roger Federer, Rafael Nadal and Novak Djokovic that saw Prajnesh attract considerable attention. The BNP Paribas Open the largest WTA – ATP combined event outside the four Grand Slams is known to many fennis fans as the fifth Grand Slam. Coming through the qualifying rounds he defeated world No 63 Benoit Paire in the first round and then got the better of world No 18 Nikoloz Basilashvili in the second round.

This unexpectedly successful run was halted in the third round by the big serving Croat Ivo Karlovic. But Prajnesh has served ample evidence that he could well be India’s most successful singles player since Ramesh Krishnan and that is good news for Indian tennis.

The wins over Paire and Basilashvili were not Prajnesh’s first victories over players ranked far above him. In June last year at Stuttgart he stunned world No 23 Denis Shapovalov of Canada to serve notice of his rising stature. But the wins over the two players at Indian Wells gave him the confidence that the earlier shock victory was not a one off. As he says ''any player can have a lucky day. After beating Shapovalov I wasn’t sure whether I could replicate it. But the win over Basilashvili was particularly significant in boosting my self belief.’’

Davis Cup coach Zeeshan Ali feels the same way. ''The important thing is he has started to believe that he can beat these big guys. Getting a win over two players who are higher ranked then him and one of them in the top 20 will give him a lot of confidence going forward. And it will give him the motivation to push forward and evolve which he has been doing.’’

The next major event for him will be playing in the qualifying rounds at the Miami Masters though he hopes he will eventfully be able to earn a main draw spot directly. The fact that he isn’t defending any ATP points until late April suggests that a few good performances on the way might see him break the top 70 – good enough for a spot in the main draw.

As he climbs the ladder Prajnesh will find the going tougher but he is confident about his own game. One is sure that he will not go the way of the two leading Indian players before him Yuki Bhambri and Ramkumar Ramanathan who promised much but could not live up to expectations. Yuki in fact reached a high of 83 last year but was not able to maintain this and has since slipped to 137. Ramkumar reached a high of 111 and then fell to 136.

Under the circumstances Prajnesh’s exploits come as a whiff of fresh air complete with the promise of more to come. He lost five years of his career to knee injuries but he is certainly making up for lost time. 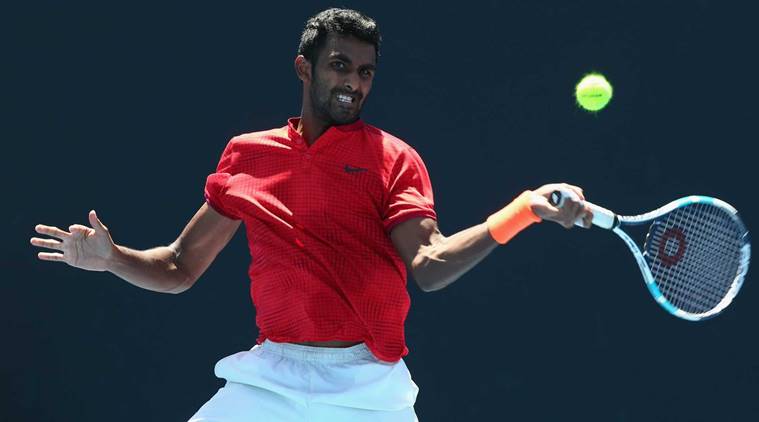