Away Wins and Over Rate Cause Debate at World Test Championship

It was obvious in the very early days of the inaugural championship that while it was a much needed and long delayed landmark in the cricket calendar for the game’s longest serving format, and to eliminate some of the needless niggling from detractors about the validity of the five-day match, the points system was far from perfect.

It was expected that the custodians of the game would take cognizance of the flaws and iron some of them out at the end of the first cycle, when New Zealand upstaged India for the first ever title of World Test champions in a stunning turn of developments that showed renewed interest in Test cricket as the record viewership revealed.

While some changes like points being awarded for each match have been welcomed, others leave room for debate and continued discussion within the cricket fraternity and sports aficionados.

Following the forced changes because of pandemic restrictions and the uneven disruptions to cricket schedules across the world, and fearing that cancellation of the final would be the death knell of the championship in its inaugural year, the International Cricket Council had to recognise that the already faulty points system would not deliver a fairer way to determine the finalists.

Earlier a total of 60 points being awarded for each series, irrespective of the number of Test matches, and when some of the tours were not even possible under the prevailing travel restrictions and reservations.

While the percentage of points system accounted for the fact that not all teams could honour the required measure of a total of six Test series including three home and three away, the prominent change of awarding each Test – as against a series – 12 points for a win, 8 for a tie and 4 for a draw, seems for now a more direct and less complicated way to determine the finalists, based on the percentage of points, given that not all teams will play an equal number of Tests in the second cycle.

For instance, while Bangladesh, one of the nine participating teams out of the 12 Test playing nations, will only play 12 Tests in the two year cycle culminating in 2023, England will play 22. There has been some debate about standardising the number of Test series across the board, but at the end of the day, cricket still needs to take into account that not all series will merit the same amount of interest from the broadcasting media or the necessary financial remuneration in the same proportion.

Therefore, series like the Border Gavaskar series and the Ashes will face five Test trials for the involved teams while others like the Pakistan–West Indies series will stick to the more conservative two Test strategy.

It is not hard to see why. Despite the West Indies securing a late win, in rather thrilling fashion, to briefly become the team with the most points on the table, with India pulling off the heroics at Lord’s (also riding on the back of resurgence from the tail-enders) attention returned to the team that raced to the top post in the inaugural cycle but were made to eat humble pie by a determined New Zealand at Southampton.

What the revised World Test championship does not still take into account is the original criticism that by not awarding additional points for away series wins as well as away Tests, it does not really enhance or highlight one of Test cricket’s many nuances: playing in a variety of conditions. With the first cycle revealing a self-preservation policy on the part of some cricket teams to ensure wins at home with not necessarily enough investment in pushing for a win overseas, it did end up becoming something of a loophole.

The one good news about the points system which almost went unnoticed in the pandemic’s first year was that it brought the issue of overtime into play.

While Australia forfeited the potential of points by refusing to tour South Africa at the last minute in March, they had also squandered four significant points for their slow over rate earlier in their home series against India, a fact that almost slipped under the radar. Australia were made aware of the fact quite brutally, although they would not have anticipated it would come back to bite them the way it did.

Slow over rates have for long been a burning issue in the sport. In the same breath it was considered that the idea of a monetary penalty at the end of the match was not deterrent enough to force captains and teams to adhere to the need to meet the fifteen overs per hour rule.

In that light, while Australia coach Justin Langer expressed surprise at the team being docked four points at the end of the Boxing Day Test against India at the Melbourne Cricket Ground, something that completely escaped the mind of the playing Australians at the time, it seemed the World Test championship did send a strong message about the need to comply with the rules, and to enforce them with the most emphatic punitive measures yet.

Showing the paucity of knowledge about rules and just how brazen teams had become about ignoring the playing hours rules, Langer rued Australia’s lost opportunity as is evident in the following words echoed similarly across interviews much later, little realizing they would come back to haunt him and the team:

“Our manager, Gavin Dovey, had gone home for Christmas with his family in England, and it wasn’t until after the game that we realised our over rate was down. That was really slack on our behalf, but I remember we were in the team room afterwards and I spoke to Painey (Test captain Tim Paine) and Dene Hills (team analyst) about it. I was a bit grumpy about it and I thought, imagine if this cost us the World Test Championship.

“And I mentioned it to the players afterwards that two overs down could cost us the World Test Championship. And so, we have to get better at that and make sure it doesn’t happen in Sydney and Brisbane. It didn’t, but we also couldn’t bowl out India twice and we didn’t make enough runs. It was relevant at the time, and it certainly became incredibly significant over the weekend.”

The penalty reflected in how narrowly Australia lost out on a berth in the final – New Zealand beating them by 0.3 percent – and sends a clear message that a team’s respect for the rules will also affect its standing and whether it gets the chance to compete for the ultimate prize.

The reminder was already delivered early into the World Test Champions’ second edition, when both India and England were found guilty of the offence of slow over rates in the rain-afflicted first Test at Trent Bridge. Both teams should be grateful that they lost just 20 percent of their match fees and a point each for their one sloppy over rather than the 4 points docked from Australia for two overs that went over the allotted time.

Although Kohli will feel a lot more comfortable that India collected 12 points after the win at Lord’s, the two points deducted from the first Test result should serve as a sobering reminder for India and indeed all teams in the competition that the game means business. The World Test championship might just have given Test cricket a little more integrity in that regard, although there is still room for evolution as far as a more refined determination of the points system is concerned. 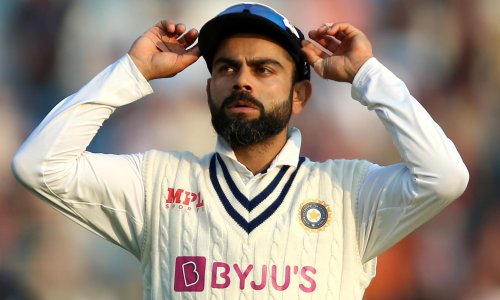